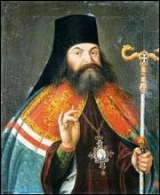 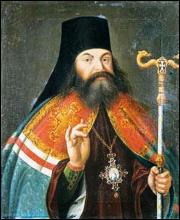 Feofan/Theophan Prokopovich (18 June 1681, Kiev
Kiev
Kiev or Kyiv is the capital and the largest city of Ukraine, located in the north central part of the country on the Dnieper River. The population as of the 2001 census was 2,611,300. However, higher numbers have been cited in the press....
–19 September 1736, St. Petersburg) was an archbishop
Archbishop
An archbishop is a bishop of higher rank, but not of higher sacramental order above that of the three orders of deacon, priest , and bishop...
and statesman
Statesman
A statesman is usually a politician or other notable public figure who has had a long and respected career in politics or government at the national and international level. As a term of respect, it is usually left to supporters or commentators to use the term...
in the Russian Empire
Russian Empire
The Russian Empire was a state that existed from 1721 until the Russian Revolution of 1917. It was the successor to the Tsardom of Russia and the predecessor of the Soviet Union...
, of Ukrainian descent. He elaborated and implemented Peter the Great
Peter I of Russia
Peter the Great, Peter I or Pyotr Alexeyevich Romanov Dates indicated by the letters "O.S." are Old Style. All other dates in this article are New Style. ruled the Tsardom of Russia and later the Russian Empire from until his death, jointly ruling before 1696 with his half-brother, Ivan V...
's reform of the Russian Orthodox Church
Russian Orthodox Church
The Russian Orthodox Church or, alternatively, the Moscow Patriarchate The ROC is often said to be the largest of the Eastern Orthodox churches in the world; including all the autocephalous churches under its umbrella, its adherents number over 150 million worldwide—about half of the 300 million...
. One of the founding fathers of the Russian Academy of Sciences
Russian Academy of Sciences
The Russian Academy of Sciences consists of the national academy of Russia and a network of scientific research institutes from across the Russian Federation as well as auxiliary scientific and social units like libraries, publishers and hospitals....
, Prokopovich wrote much religious verse and some of the most enduring sermon
Sermon
A sermon is an oration by a prophet or member of the clergy. Sermons address a Biblical, theological, religious, or moral topic, usually expounding on a type of belief, law or behavior within both past and present contexts...
s in the Russian language
Russian language
Russian is a Slavic language used primarily in Russia, Belarus, Uzbekistan, Kazakhstan, Tajikistan and Kyrgyzstan. It is an unofficial but widely spoken language in Ukraine, Moldova, Latvia, Turkmenistan and Estonia and, to a lesser extent, the other countries that were once constituent republics...
.

From a merchant family, he distinguished himself at the Kiev-Mohyla Academy of Kiev, subsequently completing his education in Poland
Poland
Poland , officially the Republic of Poland , is a country in Central Europe bordered by Germany to the west; the Czech Republic and Slovakia to the south; Ukraine, Belarus and Lithuania to the east; and the Baltic Sea and Kaliningrad Oblast, a Russian exclave, to the north...
(for which purpose he turned Uniate), and at Rome
Rome
Rome is the capital of Italy and the country's largest and most populated city and comune, with over 2.7 million residents in . The city is located in the central-western portion of the Italian Peninsula, on the Tiber River within the Lazio region of Italy.Rome's history spans two and a half...
in the College of the Propaganda. Primed with all the knowledge of the West, he returned home to seek his fortune, and, as an Orthodox monk, became one of the professors at, and subsequently rector of, the academy of Kiev
Kiev
Kiev or Kyiv is the capital and the largest city of Ukraine, located in the north central part of the country on the Dnieper River. The population as of the 2001 census was 2,611,300. However, higher numbers have been cited in the press....
. He entirely reformed the teaching of theology
Theology
Theology is the systematic and rational study of religion and its influences and of the nature of religious truths, or the learned profession acquired by completing specialized training in religious studies, usually at a university or school of divinity or seminary.-Definition:Augustine of Hippo...
there, substituting the historical method of the German theologians for the former Orthodox scholastic system.

In 1709 Peter the Great, while passing through Kiev, was struck by the eloquence of Prokopovich in a sermon on the Poltava
Battle of Poltava
The Battle of Poltava on 27 June 1709 was the decisive victory of Peter I of Russia over the Swedish forces under Field Marshal Carl Gustav Rehnskiöld in one of the battles of the Great Northern War. It is widely believed to have been the beginning of Sweden's decline as a Great Power; the...
, and in 1716 summoned him to St Petersburg. From henceforth it was Prokopovich's duty and pleasure to explain the new ideas and justify the most alarming innovations from the pulpit. He became so invaluable to the civil power that despite the determined opposition of the Russian clergy, who regarded the "Light of Kiev" as an interloper and semi-heretic, he was rapidly promoted, becoming, in 1718, bishop of Pskov
Pskov
Pskov is an ancient city and the administrative center of Pskov Oblast, Russia, located in the northwest of Russia about east from the Estonian border, on the Velikaya River. Population: -Early history:...
, and finally, in 1724, archbishop of Novgorod.1

As the author of the spiritual regulation for the reform of the Russian Orthodox Church
Russian Orthodox Church
The Russian Orthodox Church or, alternatively, the Moscow Patriarchate The ROC is often said to be the largest of the Eastern Orthodox churches in the world; including all the autocephalous churches under its umbrella, its adherents number over 150 million worldwide—about half of the 300 million...
, Feofan is regarded as the creator of the spiritual department superseding the patriarchate, and better known by its later name of the Holy Governing Synod, of which he was made vice-president. Penetrated by the conviction that ignorance was the worst of the inveterate evils of old Russia, a pitiless enemy of superstition of every sort; a reformer by nature, resourceful, Prokopovich continued to be a reformer after the death of Peter the Great.

1 He had served as vicar to the previous Archbishop of Novgorod since the early 18th century. See Pavel Tikhomirov, Kafedra Novgorodskikh Sviatitelei (Novgorod, 1895–1899).