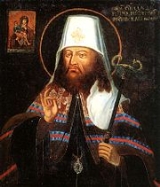 Born Danylo Savvich Tuptalo (or Tuptalenko, according to some sources) into a Cossack
Cossack
Cossacks are a group of predominantly East Slavic people who originally were members of democratic, semi-military communities in what is today Ukraine and Southern Russia inhabiting sparsely populated areas and islands in the lower Dnieper and Don basins and who played an important role in the...
family in 1651. Soon thereafter his family moved to Kiev
Kiev
Kiev or Kyiv is the capital and the largest city of Ukraine, located in the north central part of the country on the Dnieper River. The population as of the 2001 census was 2,611,300. However, higher numbers have been cited in the press....
, and he entered the Kievo-Mohyla Academy at the age of 11. On 9 July 1668 he took his religious vows
Religious vows
Religious vows are the public vows made by the members of religious communities pertaining to their conduct, practices and views.In the Buddhist tradition, in particular within the Mahayana and Vajrayana tradition, many different kinds of religious vows are taken by the lay community as well as by...
at St. Cyril's Monastery in Kiev and was given the monastic name of Dimitry (after Saint Demetrius of Thessalonika). After a brief period in Chernigov, Dimitry went to venerate the Byzantine Slavic Christian shrine
Shrine
A shrine is a holy or sacred place, which is dedicated to a specific deity, ancestor, hero, martyr, saint, daemon or similar figure of awe and respect, at which they are venerated or worshipped. Shrines often contain idols, relics, or other such objects associated with the figure being venerated....
s of Belarus
Belarus
Belarus , officially the Republic of Belarus, is a landlocked country in Eastern Europe, bordered clockwise by Russia to the northeast, Ukraine to the south, Poland to the west, and Lithuania and Latvia to the northwest. Its capital is Minsk; other major cities include Brest, Grodno , Gomel ,...
(at the time property of the Byzantine Rite Belorusian and Ukrainian Catholic metropolitans of the Uniate churches), still located in the Polish-Lithuanian Commonwealth
Polish-Lithuanian Commonwealth
The Polish–Lithuanian Commonwealth was a dualistic state of Poland and Lithuania ruled by a common monarch. It was the largest and one of the most populous countries of 16th- and 17th‑century Europe with some and a multi-ethnic population of 11 million at its peak in the early 17th century...
at that time. In 1678 he returned from Vilno to Baturyn
Baturyn
Baturyn , is a historic town in the Chernihiv Oblast of northern Ukraine. It is located in the Bakhmatskyi Raion of the oblast, on the banks of the Seym River...
and settled at the court of the hetman
Hetman
Hetman was the title of the second-highest military commander in 15th- to 18th-century Poland and the Grand Duchy of Lithuania, which together, from 1569 to 1795, comprised the Polish-Lithuanian Commonwealth, or Rzeczpospolita....
Ivan Samoylovych
Ivan Samoylovych
Ivan Samoylovych was the Hetman of Left-bank Ukraine from 1672 to 1687. His term in office was marked by further incorporation of the Cossack Hetmanate into the nascent Russian Empire and by attempts to win the Right-bank Ukraine from Poland-Lithuania....
.

During the 1680s, Dimitry lived mostly at the Kiev Pechersk Lavra
Kiev Pechersk Lavra
Kiev Pechersk Lavra or Kyiv Pechersk Lavra , also known as the Kiev Monastery of the Caves, is a historic Orthodox Christian monastery which gave its name to one of the city districts where it is located in Kiev, the capital of Ukraine....
, while his sermon
Sermon
A sermon is an oration by a prophet or member of the clergy. Sermons address a Biblical, theological, religious, or moral topic, usually expounding on a type of belief, law or behavior within both past and present contexts...
s against hard drinking and lax morals made his name known all over Russia
Russia
Russia or , officially known as both Russia and the Russian Federation , is a country in northern Eurasia. It is a federal semi-presidential republic, comprising 83 federal subjects...
. He was appointed hegumen
Hegumen
Hegumen, hegumenos, igumen, or ihumen is the title for the head of a monastery of the Eastern Orthodox Church or Eastern Catholic Churches, similar to the one of abbot. The head of a convent of nuns is called hegumenia or ihumenia . The term means "the one who is in charge", "the leader" in...
(superior
Superior (hierarchy)
In a hierarchy or tree structure of any kind, a superior is an individual or position at a higher level in the hierarchy than another , and thus closer to the apex. It is often used in business terminology to refer to people who are supervisors and in the military to people who are higher in the...
) of several major monasteries
Monastery
Monastery denotes the building, or complex of buildings, that houses a room reserved for prayer as well as the domestic quarters and workplace of monastics, whether monks or nuns, and whether living in community or alone .Monasteries may vary greatly in size – a small dwelling accommodating only...
of Ukraine
Cossack Hetmanate
The Hetmanate or Zaporizhian Host was the Ruthenian Cossack state in the Central Ukraine between 1649 and 1782.The Hetmanate was founded by first Ukrainian hetman Bohdan Khmelnytsky during the Khmelnytsky Uprising . In 1654 it pledged its allegiance to Muscovy during the Council of Pereyaslav,...
, but concentrated his attention upon the ambitious project of integrating all the lives of Russian saint
Saint
A saint is a holy person. In various religions, saints are people who are believed to have exceptional holiness.In Christian usage, "saint" refers to any believer who is "in Christ", and in whom Christ dwells, whether in heaven or in earth...
s into a single work, which he published as Monthly Readings (Четьи-минеи) or Menologion in 1684-1705. He also found time to study ecclesiastical history of the Russian Orthodox Church
Russian Orthodox Church
The Russian Orthodox Church or, alternatively, the Moscow Patriarchate The ROC is often said to be the largest of the Eastern Orthodox churches in the world; including all the autocephalous churches under its umbrella, its adherents number over 150 million worldwide—about half of the 300 million...
. 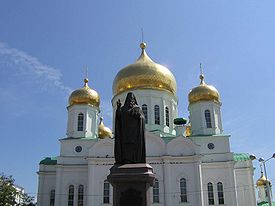 Dimitry was also active as a composer, although his musical education is undocumented aside from the standard music curriculum established by Feofan Prokopovich at the Kiev-Mohyla Academy. Many of his Penitential Psalms achieved wide circulation, not only in the Ukraine but in the Balkans too, and many have become an integral part of Ukrainian folk-song tradition through the kobzar
Kobzar
A Kobzar was an itinerant Ukrainian bard who sang to his own accompaniment.-Tradition:Kobzars were often blind, and became predominantly so by the 1800s...
i, itinerant blind singers.

Dimitry is credited as composer or compiler of the first Russian opera
Russian opera
Russian opera is the art of opera in Russia. Operas by composers of Russian origin, written or staged outside of Russia, also belong to this category, as well as the operas of foreign composers written or intended for the Russian scene. These are not only Russian-language operas...
, the six-hour-long Rostov Mysteries of 1705. Though this has been staged, notably by Boris Pokrovsky
Boris Pokrovsky
Boris Alexandrovich Pokrovsky was the operatic stage director of the Bolshoi Theatre between 1943 and 1982...
's Moscow Chamber Musical Theatre
Moscow Chamber Musical Theatre
The Moscow State Academic Chamber Musical Theatre is a Moscow theatre and opera house. The theatre was founded in 1971 and carries the name of its founder Boris Alexandrovich Pokrovsky...
, in Moscow and at the Brighton Festival (1993), it may best be judged an oratorio on the lives of Russian saints. Its basis is the "Cheti-Minei" (Четьи-Минеи), published in four volumes in 1689, 1690, 1700 and 1705 — the same source that inspired Pushkin in 1825 to write Boris Godunov.

Upon Dimitry's death on October 28, 1709 his relics were placed at St. Jacob's Monastery, which his followers would rebuild as Dimitry's shrine. A fortress on the Don River was named after him; today it is known as Rostov-on-the-Don.