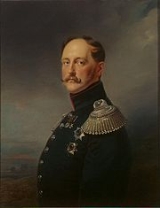 Overview
Nicholas I ( – ) was the Emperor of Russia from 1825 until 1855, known as one of the most reactionary
Reactionary
The term reactionary refers to viewpoints that seek to return to a previous state in a society. The term is meant to describe one end of a political spectrum whose opposite pole is "radical". While it has not been generally considered a term of praise it has been adopted as a self-description by...
of the Russian monarchs. On the eve of his death, the Russian Empire reached its historical zenith spanning over 20 million square kilometers (20 square kilometres (7.7 sq mi) million square miles). In his capacity as the emperor he was also the King of Poland and the Grand Duke of Finland.

Nicholas I was born in Gatchina
Gatchina
Gatchina is a town and the administrative center of Gatchinsky District of Leningrad Oblast, Russia, located south of St. Petersburg by the road leading to Pskov...
to Emperor Paul I
Paul I of Russia
Paul I was the Emperor of Russia between 1796 and 1801. He also was the 72nd Prince and Grand Master of the Order of Malta .-Childhood:...
and Empress Maria Feodorovna.

What made him powerful?
More
x