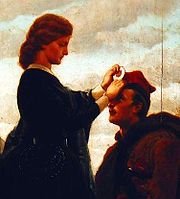 A cockade is a knot of ribbons, or other circular- or oval-shaped symbol of distinctive colors which is usually worn on a hat
Hat
A hat is a head covering. It can be worn for protection against the elements, for ceremonial or religious reasons, for safety, or as a fashion accessory. In the past, hats were an indicator of social status...
.

During the 1780 Gordon Riots
Gordon Riots
The Gordon Riots of 1780 were an anti-Catholic protest against the Papists Act 1778.The Popery Act 1698 had imposed a number of penalties and disabilities on Roman Catholics in England; the 1778 act eliminated some of these. An initial peaceful protest led on to widespread rioting and looting and...
in London the blue cockade became a symbol of anti-government feelings and was worn by most of the rioters.

Cockades were later widely worn by revolutionaries and proponents of various political factions in France
France
The French Republic , The French Republic , The French Republic , (commonly known as France , is a unitary semi-presidential republic in Western Europe with several overseas territories and islands located on other continents and in the Indian, Pacific, and Atlantic oceans. Metropolitan France...
and its colonies beginning in 1789. Just as they did in the United States a few years before, the French now pinned the blue-and-red cockade of Paris onto the white cockade of the Ancien Régime - thus producing the original Tricolore cockade. Later, distinctive colours and styles of cockade would indicate the wearer's faction—although the meanings of the various styles were not entirely consistent, and varied somewhat by region and period.


Cockades of the Confederate States


Cockades of the European military

Also from the 18th century various Europe
Europe
Europe is, by convention, one of the world's seven continents. Comprising the westernmost peninsula of Eurasia, Europe is generally 'divided' from Asia to its east by the watershed divides of the Ural and Caucasus Mountains, the Ural River, the Caspian and Black Seas, and the waterways connecting...
an states used cockades to denote the nationalities of their military. Ribbon-style cockades were worn on tricorne
Tricorne
The tricorne or tricorn is a style of hat that was popular during the 18th century, falling out of style by 1800. At the peak of its popularity, the tricorne was worn as civilian dress and as part of military and naval uniforms...
s and bicorne
Bicorne
The bicorne or bicorn is an archaic form of hat widely adopted in the 1790s as an item of uniform by European and American military and naval officers...
s just as the French did, and also on cocked hats and shako
Shako
A shako is a tall, cylindrical military cap, usually with a peak or visor and sometimes tapered at the top...
es; metal cockades were worn at the right side of helmet
Helmet
A helmet is a form of protective gear worn on the head to protect it from injuries.Ceremonial or symbolic helmets without protective function are sometimes used. The oldest known use of helmets was by Assyrian soldiers in 900BC, who wore thick leather or bronze helmets to protect the head from...
s; small button-type cockades were worn at the front of kepi
Kepi
The kepi is a cap with a flat circular top and a visor or peak . Etymologically, the word is a borrowing of the French képi, itself a respelling of the Alemannic Käppi: a diminutive form of Kappe, meaning "cap"....
s and peaked caps.

During the Napoleonic wars
Napoleonic Wars
The Napoleonic Wars were a series of wars declared against Napoleon's French Empire by opposing coalitions that ran from 1803 to 1815. As a continuation of the wars sparked by the French Revolution of 1789, they revolutionised European armies and played out on an unprecedented scale, mainly due to...
, the armies of France
France
The French Republic , The French Republic , The French Republic , (commonly known as France , is a unitary semi-presidential republic in Western Europe with several overseas territories and islands located on other continents and in the Indian, Pacific, and Atlantic oceans. Metropolitan France...
and Russia
Russia
Russia or , officially known as both Russia and the Russian Federation , is a country in northern Eurasia. It is a federal semi-presidential republic, comprising 83 federal subjects...
, had the imperial French cockade or the larger cockade of St. George pinned on the front of their shako
Shako
A shako is a tall, cylindrical military cap, usually with a peak or visor and sometimes tapered at the top...
s.

In particular, the German Empire
German Empire
The German Empire refers to Germany during the "Second Reich" period from the unification of Germany and proclamation of Wilhelm I as German Emperor on 18 January 1871, to 1918, when it became a federal republic after defeat in World War I and the abdication of the Emperor, Wilhelm II.The German...
used two cockades on each army headgear: one (black-white-red) for the empire; the other for the individual German provinces and kingdoms, which had used their own colors long before. The Weimar Republic
Weimar Republic
The Weimar Republic is the name given by historians to the parliamentary republic established in 1919 in Germany to replace the imperial form of government...
removed these, as they might promote faction which would lead to the dissolution of Germany into petty principalities again. In the Second World War, the imperial or Kaiserliche colors of black on the outside, then white, and red on the inside were used on all army caps.

France began the first Air Service
History of the Armée de l'Air (1909-1942)
The Armée de l'Air is the name of the French Air Force in its native language. It has borne this name only from August 1933 when it was still under the jurisdiction of the army...
in 1909 and soon picked the traditional French cockade as the first national emblem, now usually termed a roundel
Roundel
A roundel in heraldry is a disc; the term is also commonly used to refer to a type of national insignia used on military aircraft, generally circular in shape and usually comprising concentric rings of different colours.-Heraldry:...
, on military aircraft. During World War I, other countries adopted national cockades and used these coloured emblems as roundels on their military aircraft. These designs often bear an additional central device or emblem to further identify national aircraft, those from the French navy
French Navy
The French Navy, officially the Marine nationale and often called La Royale is the maritime arm of the French military. It includes a full range of fighting vessels, from patrol boats to a nuclear powered aircraft carrier and 10 nuclear-powered submarines, four of which are capable of launching...
bearing a black anchor within the French cockade.

Metal cockades continue to be worn to the present day by the armed forces of Germany and Russia.