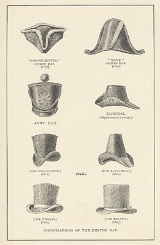 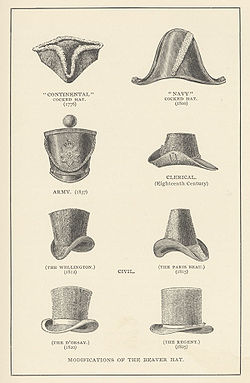 A hat is a head covering. It can be worn for protection against the elements, for ceremonial or religious reasons, for safety, or as a fashion accessory
Fashion accessory
Fashion accessories are decorative items that supplement and complement clothes, such as jewelery, gloves, handbags, hats, belts, scarves, wigs, watches, sunglasses, pins, stockings, bow ties, hand fans, leg warmers, leggings, neckties, suspenders, and tights....
. In the past, hats were an indicator of social status
Social status
In sociology or anthropology, social status is the honor or prestige attached to one's position in society . It may also refer to a rank or position that one holds in a group, for example son or daughter, playmate, pupil, etc....
. In the military
Military
A military is an organization authorized by its greater society to use lethal force, usually including use of weapons, in defending its country by combating actual or perceived threats. The military may have additional functions of use to its greater society, such as advancing a political agenda e.g...
, they may denote nationality, branch of service, rank and/or regiment
Regiment
A regiment is a major tactical military unit, composed of variable numbers of batteries, squadrons or battalions, commanded by a colonel or lieutenant colonel...
.

One of the first pictorial depictions of a hat appears in a Thebes
Ancient Thebes (Boeotia)
See Thebes, Greece for the modern city built on the ancient ruins.Ancient Thebes was a Boeotian city-state , situated to the north of the Cithaeron range, which divides Boeotia from Attica, and on the southern edge of the Boeotian plain...
tomb painting which shows a man wearing a coolie-style straw hat. Other early hats were the Pileus, a simple skull cap; the Phrygian cap, worn by freed slaves in Greece and Rome; and the Greek Pestasos, the first known hat with a brim. Women wore veils, kerchiefs, hoods, caps and wimples. St. Clement, the patron saint of felt
Felt
Felt is a non-woven cloth that is produced by matting, condensing and pressing woollen fibres. While some types of felt are very soft, some are tough enough to form construction materials. Felt can be of any colour, and made into any shape or size....
hatmakers, is said to have discovered wool felt when he filled his sandals with flax
Flax
Flax is a member of the genus Linum in the family Linaceae. It is native to the region extending from the eastern Mediterranean to India and was probably first domesticated in the Fertile Crescent...
fibers to protect his feet.Structured hats for women similar to those of male courtiers began to be worn in the late 16th century. The term ‘milliner’ comes from the Italian city of Milan, where the best quality hats were made in the 18th century. Millinery was traditionally a woman’s occupation, with the milliner not only creating hats and bonnets but also choosing lace, trimmings and accessories to complete an outfit.

In the first half of the 19th century, women wore bonnets that gradually became larger, decorated with ribbons, flowers, feathers and gauze trims. By the end of the century, many other styles were introduced, among them hats with wide brims and flat crowns, the flower pot and the toque. By the middle of the 1920s, when women began to cut their hair short, they chose hats that hugged the head like a helmet.

Since the early 21st century, flamboyant hats have made a comeback, with a new wave of competitive young milliners designing creations that include turban caps, tromp l'oeil effect felt hats and tall headpieces made of human hair. Some new hat collections have been described as "wearable sculpture." Many pop stars, among them Lady Gaga
Lady GaGa
Stefani Joanne Angelina Germanotta , better known by her stage name Lady Gaga, is an American singer and songwriter. Born and raised in New York City, she primarily studied at the Convent of the Sacred Heart and briefly attended New York University's Tisch School of the Arts before withdrawing to...
, have commissioned hats as publicity stunts.

One of the most famous London hatters is James Lock & Co of St James's Street. Another was Sharp & Davis of 6 Fish Street Hill. Stetson
John B. Stetson Company
The John B. Stetson Company, founded by John B. Stetson in 1865, was the maker of the Stetson cowboy hats, but ceased manufacturing in 1970. Stetson hats are now being manufactured in Garland, Texas by Hatco Inc who also produce Resistol, and Charlie 1 Horse, hats. Stetson reentered manufacturing...
is a well-known American hat company.In the late 20th century museums credited London-based David Shilling
David Shilling
David Shilling is an English milliner, sculpturer, fashion and interior designer synonymous with designing extravagant hats and clothing displayed on Ladies' Day at Royal Ascot.- Childhood :...
with reinventing hats worldwide. Notable Belgian hat designers are Elvis Pompilio
Elvis Pompilio
Elvis Pompilio is a Belgian fashion designer who specialises in hats. He was born in Liège to a family of Italian origin.Pompilio entered business in 1987, with a workshop in Brussels where he produced designs for use in fashion shows by marques such as Dior and Valentino. In 1990, he opened a...
and Fabienne Delvigne, whose hats are worn by European royals.Philip Treacy
Philip Treacy
Philip Treacy OBE is an Irish milliner.Born in Ahascragh,in the West of Ireland, he lived with his parents, seven brothers and sister across the road from the village church...
OBE
Order of the British Empire
The Most Excellent Order of the British Empire is an order of chivalry established on 4 June 1917 by George V of the United Kingdom. The Order comprises five classes in civil and military divisions...
is an award-winning Irish milliner whose hats have been commissioned by top designers and worn at royal weddings.

Hat sizes are determined by measuring the circumference
Circumference
The circumference is the distance around a closed curve. Circumference is a special perimeter.-Circumference of a circle:The circumference of a circle is the length around it....
of a person's head about 1/2 inch (1.3 cm) above the ears. Inches or centimeters may be used depending on the manufacturer. Felt hats can be stretched for a custom fit. Some hats, like hard hat
Hard hat
A hard hat is a type of helmet predominantly used in workplace environments, such as construction sites, to protect the head from injury by falling objects, impact with other objects, debris, bad weather and electric shock. Inside the helmet is a suspension that spreads the helmet's weight over the...
s and baseball cap
Baseball cap
A baseball cap is a type of soft cap with a rounded stiff brim. The front of the cap typically contains designs or logos of sports teams ,...
s, are adjustable.
Cheaper hats come in "standard sizes", such as small, medium, large, extra large: the mapping of measured size to the various "standard sizes" varies from maker to maker and style to style, as can be seen by studying various catalogues, such as Hammacher-Schlemmer
Hammacher-Schlemmer
Hammacher Schlemmer is a retailer and mail order dealer founded in 1848. They claim to be the oldest continuously published catalog in the United States, with a claimed annual catalog circulation exceeding 30 million. It is based in Niles, Illinois. The company is owned by the heir of J...
.

Traditional hat size is worked out by adding the fore and aft and side to side measurements (in inches) then dividing by two. In the UK, an equivalent hat size is an eighth of an inch smaller than in the US.