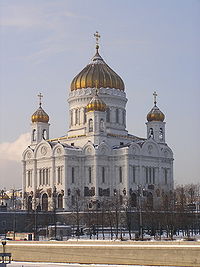 This a list of tallest Orthodox churches in the world, all those higher than 70 metres.

Traditionally, an Orthodox church is crowned by one or several dome
Dome
A dome is a structural element of architecture that resembles the hollow upper half of a sphere. Dome structures made of various materials have a long architectural lineage extending into prehistory....
s with Orthodox cross
Orthodox cross
The Orthodox Cross is a variation of the Christian cross and is commonly found in Eastern Orthodox Churches. The cross has three horizontal crossbeams, the top representing the plate with INRI, and the bottom, a footrest...
es on the top of each. The overall height of the temple is measured by the highest point of the cross above the main temple.

The number of domes is symbolical. One dome is a symbol of Christ
Christ
Christ is the English term for the Greek meaning "the anointed one". It is a translation of the Hebrew , usually transliterated into English as Messiah or Mashiach...
or God, three domes are symbolic of Trinity
Trinity
The Christian doctrine of the Trinity defines God as three divine persons : the Father, the Son , and the Holy Spirit. The three persons are distinct yet coexist in unity, and are co-equal, co-eternal and consubstantial . Put another way, the three persons of the Trinity are of one being...
, five domes symbolize Christ and Four Evangelists
Four Evangelists
In Christian tradition the Four Evangelists are Matthew, Mark, Luke, and John, the authors attributed with the creation of the four Gospel accounts in the New Testament that bear the following titles:*Gospel according to Matthew*Gospel according to Mark...
, seven domes are often used because seven is a holy number, and thirteen domes correspond to Christ and his twelve Apostles. Other numbers are also encountered.

An Orthodox church may also have a bell tower
Bell tower
A bell tower is a tower which contains one or more bells, or which is designed to hold bells, even if it has none. In the European tradition, such a tower most commonly serves as part of a church and contains church bells. When attached to a city hall or other civic building, especially in...
or zvonnitsa
Zvonnitsa
Zvonnitsa is a large rectangular structure containing multiple archs or beams that carry bells, where bell ringers stand on its base level and perform the ringing using long ropes, like playing on a kind of giant musical instrument...
, either a part of the main church building, or standalone structure. Typically, bell tower is higher than the main temple.

This list is divided into two sections, one listing the highest temples and the other listing the highest bell towers or zvonnitsa
Zvonnitsa
Zvonnitsa is a large rectangular structure containing multiple archs or beams that carry bells, where bell ringers stand on its base level and perform the ringing using long ropes, like playing on a kind of giant musical instrument...
s.