Encyclopedia
Sarov is a closed
Closed city
A closed city or closed town is a settlement with travel and residency restrictions in the Soviet Union and some of its successor countries. In modern Russia, such places are officially known as "closed administrative-territorial formations" ....
town in Nizhny Novgorod Oblast
Nizhny Novgorod Oblast
Nizhny Novgorod Oblast is a federal subject of Russia . Its administrative center is the city of Nizhny Novgorod. Population: The oblast is crossed by the Volga River. Apart from Nizhny Novgorod's metropolitan area, the biggest city is Arzamas...
, Russia
Russia
Russia or , officially known as both Russia and the Russian Federation , is a country in northern Eurasia. It is a federal semi-presidential republic, comprising 83 federal subjects...
. Until 1995 it was known as Kremlyov ., while from 1946 to 1991 it was called Arzamas-16 . The town is off limits to foreigners as it is the Russian center for nuclear research. Population: 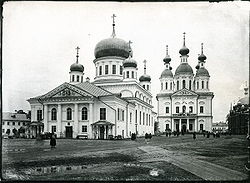 The history of the town can be divided into two different periods. In the earlier history of Russia it was known as one of the holy places of the Russian Orthodox Church, because of its monastery, that gave Russia one of its greatest saints, St. Seraphim. Since the 1940s it has gradually become the center for research and production of Soviet and later Russian nuclear weapons.

The history of human settlement in the area around Sarov goes back at least to the 12th–13th centuries, when a large Mordovian settlement was founded on its spot. In 1298, the town was taken over by Tatars
Tatars
Tatars are a Turkic speaking ethnic group , numbering roughly 7 million.The majority of Tatars live in the Russian Federation, with a population of around 5.5 million, about 2 million of which in the republic of Tatarstan.Significant minority populations are found in Uzbekistan, Kazakhstan,...
.

The modern town took its name from being the site of the Sarova monastery next to the Sarovka River. In 1664, an Orthodox monk Theodosius first settled on the Sarov hill. The first Church of Sarov tenement was founded in 1706. Saint Seraphim was living in Sarov from 1778 to 1833. In 1903, the monastery was visited by the Tsar Nicholas II and other members of the royal family. At that time the monastery had nine churches, including one underground. Around 320 monks lived in the monastery.

In 1923, the monastery was closed, the monks faced Bolshevik repressions, and many were executed. During WWII, the monastery buildings were used as factories for producing rockets for BM-13 "Katyusha" rocket launchers.

In 1946, the All-Union Scientific Research Institute of Experimental Physics—a nuclear weapon
Nuclear weapon
A nuclear weapon is an explosive device that derives its destructive force from nuclear reactions, either fission or a combination of fission and fusion. Both reactions release vast quantities of energy from relatively small amounts of matter. The first fission bomb test released the same amount...
s design facility that would become known in the West under the acronym VNIIEF—was built. The town, initially called Arzamas-75, later renamed into Arzamas-16, was removed from all unclassified maps. In 1954, Arzamas-16 was given a town status. 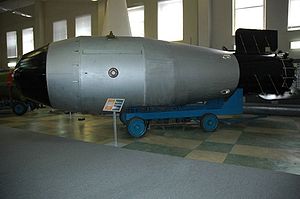 Much of the town was built by German prisoners of war and its architecture has a definite German/European flavor. The town is home to the Russian Federation Nuclear Center and "Atomic Bomb" museum which has a number of casings of Soviet-era nuclear weapons and photographs of those involved in their production. The main access is by train, which, after a security stop and inspection, is allowed into the town to disembark passengers. A small airport on the facility is generally for government aircraft only, and visitors usually fly to Nizhny Novgorod
Nizhny Novgorod
Nizhny Novgorod , colloquially shortened to Nizhny, is, with the population of 1,250,615, the fifth largest city in Russia, ranking after Moscow, St. Petersburg, Novosibirsk, and Yekaterinburg...
airport and then drive.

The town is surrounded by fences patrolled by the military. Foreigners, and even Russians who do not live in Sarov, are not allowed to enter the town without permission. Foreigners who visit on business must surrender their passports, phones, and cameras to security while they are in the facility, though some documentary filmmakers have shot footage inside the town walls.

Boris Yeltsin
Boris Yeltsin
Boris Nikolayevich Yeltsin was the first President of the Russian Federation, serving from 1991 to 1999.Originally a supporter of Mikhail Gorbachev, Yeltsin emerged under the perestroika reforms as one of Gorbachev's most powerful political opponents. On 29 May 1990 he was elected the chairman of...
changed the town's name back to Sarov at the request of the residents in August 1995.

Today the Russian Federal nuclear center is responsible for important decisions concerning the development, production, storage, and utilisation of nuclear weapons; the recycling of radioactive and other materials; and research in fundamental and applied physics.

Sarov is twinned
Town twinning
Twin towns and sister cities are two of many terms used to describe the cooperative agreements between towns, cities, and even counties in geographically and politically distinct areas to promote cultural and commercial ties.- Terminology :...
with: Los Alamos
Los Alamos, New Mexico
Los Alamos is a townsite and census-designated place in Los Alamos County, New Mexico, United States, built upon four mesas of the Pajarito Plateau and the adjoining White Rock Canyon. The population of the CDP was 12,019 at the 2010 Census. The townsite or "the hill" is one part of town while...
, United States
United States
The United States of America is a federal constitutional republic comprising fifty states and a federal district...
. New Athos
New Athos
New Athos is a town in the Gudauta raion of Abkhazia, situated some 22 km from Sukhumi by the shores of the Black Sea. The town was previously known under the names Nikopol, Acheisos, Anakopia, Nikopia, Nikofia, Nikopsis, Absara, Psyrtskha...
, Abkhazia
Abkhazia
Abkhazia is a disputed political entity on the eastern coast of the Black Sea and the south-western flank of the Caucasus.Abkhazia considers itself an independent state, called the Republic of Abkhazia or Apsny...
(de jure Georgia
Georgia (country)
Georgia is a sovereign state in the Caucasus region of Eurasia. Located at the crossroads of Western Asia and Eastern Europe, it is bounded to the west by the Black Sea, to the north by Russia, to the southwest by Turkey, to the south by Armenia, and to the southeast by Azerbaijan. The capital of...
)