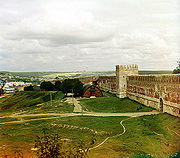 A kremlin same root as in kremen ' onMouseout='HidePop("91618")' href="/topics/Flint">flint
Flint
Flint is a hard, sedimentary cryptocrystalline form of the mineral quartz, categorized as a variety of chert. It occurs chiefly as nodules and masses in sedimentary rocks, such as chalks and limestones. Inside the nodule, flint is usually dark grey, black, green, white, or brown in colour, and...
) is a major fortified central complex found in historic Russia
Russia
Russia or , officially known as both Russia and the Russian Federation , is a country in northern Eurasia. It is a federal semi-presidential republic, comprising 83 federal subjects...
n cities. This word is often used to refer to the best-known one, the Moscow Kremlin
Moscow Kremlin
The Moscow Kremlin , sometimes referred to as simply The Kremlin, is a historic fortified complex at the heart of Moscow, overlooking the Moskva River , Saint Basil's Cathedral and Red Square and the Alexander Garden...
, or metonymically to the government that is based there. Outside Russia, the name Kremlin is sometimes mistakenly thought of as being Saint Basil's Cathedral
Saint Basil's Cathedral
The Cathedral of the Protection of Most Holy Theotokos on the Moat , popularly known as Saint Basil's Cathedral , is a Russian Orthodox church erected on the Red Square in Moscow in 1555–61. Built on the order of Ivan the Terrible to commemorate the capture of Kazan and Astrakhan, it marks the...
because of its distinctive environment, although the cathedral is not a part of the Moscow Kremlin.

Russia's presidential administration is located in the Moscow Kremlin. During the Cold War
Cold War
The Cold War was the continuing state from roughly 1946 to 1991 of political conflict, military tension, proxy wars, and economic competition between the Communist World—primarily the Soviet Union and its satellite states and allies—and the powers of the Western world, primarily the United States...
, the government of the USSR
Soviet Union
The Soviet Union , officially the Union of Soviet Socialist Republics , was a constitutionally socialist state that existed in Eurasia between 1922 and 1991....
was located in the Moscow Kremlin, but now the Russian government occupies a building outside it.


Kremlins outside borders of modern Russia

After the disintegrations of the Kievan Rus, the Russian Empire
Russian Empire
The Russian Empire was a state that existed from 1721 until the Russian Revolution of 1917. It was the successor to the Tsardom of Russia and the predecessor of the Soviet Union...
and the USSR
Soviet Union
The Soviet Union , officially the Union of Soviet Socialist Republics , was a constitutionally socialist state that existed in Eurasia between 1922 and 1991....
, some fortresses considered Kremlin-type, remained beyond the borders of modern Russia. Some are listed below:

Many Russian monasteries
Monastery
Monastery denotes the building, or complex of buildings, that houses a room reserved for prayer as well as the domestic quarters and workplace of monastics, whether monks or nuns, and whether living in community or alone .Monasteries may vary greatly in size – a small dwelling accommodating only...
have been built in a fortress-like style similar to that of a kremlin. For a partial list, see Monasteries in Russia.