Encyclopedia
Smolny Convent or Smolny Convent of the Resurrection (Voskresensky), located on Ploschad Rastrelli, on the bank of the River Neva in Saint Petersburg
Saint Petersburg
Saint Petersburg is a city and a federal subject of Russia located on the Neva River at the head of the Gulf of Finland on the Baltic Sea...
, Russia
Russia
Russia or , officially known as both Russia and the Russian Federation , is a country in northern Eurasia. It is a federal semi-presidential republic, comprising 83 federal subjects...
, consists of a cathedral (sobor
Sobor
A sobor is a council of bishops together with other clerical and lay delegates representing the church as a whole in matters of importance...
) and a complex of buildings surrounding it, originally intended for a convent
Convent
A convent is either a community of priests, religious brothers, religious sisters, or nuns, or the building used by the community, particularly in the Roman Catholic Church and in the Anglican Communion...
.

This Russian Orthodox convent was built to house Elizabeth, the daughter of Peter the Great. After she was disallowed succession
Order of succession
An order of succession is a formula or algorithm that determines who inherits an office upon the death, resignation, or removal of its current occupant.-Monarchies and nobility:...
to the throne, she opted to become a nun. However her Imperial predecessor, Ivan VI
Ivan VI of Russia
Ivan VI Antonovich of Russia , was proclaimed Emperor of Russia in 1740, as an infant, although he never actually reigned. Within less than a year, he was overthrown by the Empress Elizabeth of Russia, Peter the Great's daughter...
was overthrown during a coup d'état
Coup d'état
A coup d'état state, literally: strike/blow of state)—also known as a coup, putsch, and overthrow—is the sudden, extrajudicial deposition of a government, usually by a small group of the existing state establishment—typically the military—to replace the deposed government with another body; either...
(carried out by the royal guards
Preobrazhensky regiment
The Preobrazhensky Regiment was one of the oldest and elite regiments of the Russian army. Along with the Semenovsky regiment also served as a gendarmie unit for the state Secret Chancellery in the 18th century, headed by the Prince Fyodor Romodanovsky.It was formed by Peter the Great in the late...
in 1741). Elizabeth then decided against entering monastic life and accepted the offer of the Russian throne and work on the convent continued with her royal patronage.
The convent's main church (catholicon
Catholicon
Catholicon may refer to:* Catholicon, the conventual church at the centre of an abbey* Katholikon, the primary church in an Orthodox or Eastern Catholic monastery* Catholicon , part of the Holy Liturgy of Mor Yakub of the Syriac Orthodox Church...
or sobor
Sobor
A sobor is a council of bishops together with other clerical and lay delegates representing the church as a whole in matters of importance...
), a blue-and-white building, is considered to be one of the architectural masterpieces of the Italian architect Francesco Bartolomeo Rastrelli
Francesco Bartolomeo Rastrelli
Francesco Bartolomeo Rastrelli was an Italian architect naturalized Russian. He developed an easily recognizable style of Late Baroque, both sumptuous and majestic...
, who also redesigned the Winter Palace
Winter Palace
The Winter Palace in Saint Petersburg, Russia, was, from 1732 to 1917, the official residence of the Russian monarchs. Situated between the Palace Embankment and the Palace Square, adjacent to the site of Peter the Great's original Winter Palace, the present and fourth Winter Palace was built and...
, and created the Grand Catherine Palace (Yekaterininsky) in Tsarskoye Selo
Tsarskoye Selo
Tsarskoye Selo is the town containing a former Russian residence of the imperial family and visiting nobility, located south from the center of St. Petersburg. It is now part of the town of Pushkin and of the World Heritage Site Saint Petersburg and Related Groups of Monuments.-History:In...
(Pushkin
Pushkin (town)
Pushkin is a municipal town in Pushkinsky District of the federal city of St. Petersburg, Russia, located south from the center of St. Petersburg proper, and its train station, Detskoye Selo, is directly connected by railway to the Vitebsky Rail Terminal of the city...
), the Grand Palace in Peterhof
Peterhof Palace
The Peterhof Palace in Russian, so German is transliterated as "Петергoф" Petergof into Russian) for "Peter's Court") is actually a series of palaces and gardens located in Saint Petersburg, Russia, laid out on the orders of Peter the Great. These Palaces and gardens are sometimes referred as the...
and many other major St. Petersburg landmarks.
The Cathedral is the centerpiece of the convent, built by Rastrelli between 1748 and 1764. The projected bell-tower was to become the tallest building in St. Petersburg and, at the time, all of Russia. Elizabeth's death in 1762 prevented Rastrelli from completing this grand design. 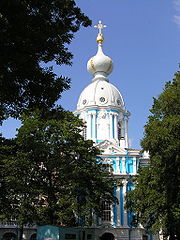 When Catherine II
Catherine II of Russia
Catherine II, also known as Catherine the Great , Empress of Russia, was born in Stettin, Pomerania, Prussia on as Sophie Friederike Auguste von Anhalt-Zerbst-Dornburg...
assumed the throne, it was found that the new Empress strongly disapproved of the baroque style, and funding that had supported the construction of the convent rapidly ran out. Rastrelli was unable to build the huge bell-tower he had planned and unable to finish the interior of the cathedral. The building was only finished in 1835 by Vasily Stasov
Vasily Stasov
Vasily Petrovich Stasov was a Russian architect.-Biography:Stasov was born in Moscow....
with the addition of a neo-classical
Neoclassical architecture
Neoclassical architecture was an architectural style produced by the neoclassical movement that began in the mid-18th century, manifested both in its details as a reaction against the Rococo style of naturalistic ornament, and in its architectural formulas as an outgrowth of some classicizing...
interior to suit the changed architectural tastes at the time. The Cathedral was consecrated on 22 July 1835; its main altar
Altar
An altar is any structure upon which offerings such as sacrifices are made for religious purposes. Altars are usually found at shrines, and they can be located in temples, churches and other places of worship...
was dedicated to the Resurrection
Resurrection
Resurrection refers to the literal coming back to life of the biologically dead. It is used both with respect to particular individuals or the belief in a General Resurrection of the dead at the end of the world. The General Resurrection is featured prominently in Jewish, Christian, and Muslim...
and the two side altars were dedicated to St. Mary Magdalene and Righteous Elizabeth. The church was closed by the Soviet authorities in 1923. It was looted and allowed to decay until 1982, when it became a Concert Hall.