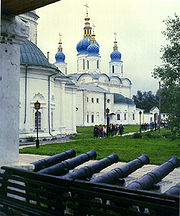 Tobolsk is a town in Tyumen Oblast
Tyumen Oblast
Tyumen Oblast is a federal subject of Russia . Its administrative center is the city of Tyumen. The oblast has administrative jurisdiction over two autonomous okrugs—Khanty-Mansi Autonomous Okrug and Yamalo-Nenets Autonomous Okrug. Tyumen is the largest city, with over half a million inhabitants...
, Russia
Russia
Russia or , officially known as both Russia and the Russian Federation , is a country in northern Eurasia. It is a federal semi-presidential republic, comprising 83 federal subjects...
, located at the confluence
Confluence
Confluence, in geography, describes the meeting of two or more bodies of water.Confluence may also refer to:* Confluence , a property of term rewriting systems...
of the Tobol
Tobol River
Tobol is a river in Kurgan and Tyumen Oblasts in Russia and Kazakhstan, left tributary of the Irtysh. The length of the Tobol River is 1591 km. The area of its drainage basin is 426,000 km². Average discharge at mouth is 805 m³/s. The lower reaches of the river freeze up in late October -...
and Irtysh Rivers. It is a historic capital of Siberia
Siberia
Siberia is an extensive region constituting almost all of Northern Asia. Comprising the central and eastern portion of the Russian Federation, it was part of the Soviet Union from its beginning, as its predecessor states, the Tsardom of Russia and the Russian Empire, conquered it during the 16th...
. Population:

It was founded by Yermak Timofeyevich
Yermak Timofeyevich
Yermak Timofeyevich , Cossack leader, Russian folk hero and explorer of Siberia. His exploration of Siberia marked the beginning of the expansion of Russia towards this region and its colonization...
's Cossacks in 1585–1586 during the first Russian advance into Siberia near the ruins of the Siberia Khanate
Siberia Khanate
The Khanate of Sibir were the patrilineal descendants of Shayban , the fifth son of Jochi and grandson of Genghis Khan. The Khanate had an ethnically diverse population of Siberian Tatars, Khanty, Mansi, Nenets and Selkup people. Along with the Khanate of Kazan it was the northernmost Muslim state....
's capital, Qashliq
Qashliq
Qashliq, Isker or Sibir was a medieval Siberian Tatar fortress, in the 16th century the capital of the Khanate of Sibir, located on the right bank of the Irtysh River at its confluence with the Sibirka rivulet, some 17 km from the modern city of Tobolsk.The fortress is first mentioned in...
. It became the seat of the Viceroy of Siberia and prospered on trade with China
China
Chinese civilization may refer to:* China for more general discussion of the country.* Chinese culture* Greater China, the transnational community of ethnic Chinese.* History of China* Sinosphere, the area historically affected by Chinese culture...
and Bukhara
Bukhara
Bukhara , from the Soghdian βuxārak , is the capital of the Bukhara Province of Uzbekistan. The nation's fifth-largest city, it has a population of 263,400 . The region around Bukhara has been inhabited for at least five millennia, and the city has existed for half that time...
. It was there that the first school, theatre, and newspaper in Siberia were established. In The Further Adventures of Robinson Crusoe
The Further Adventures of Robinson Crusoe
The title-page of the less known Part II of Robinson Crusoe's further adventures shows this text: THE FARTHER ADVENTURES OF ROBINSON CRUSOE; Being the Second and Last Part OF HIS LIFE,...
, Daniel Defoe
Daniel Defoe
Daniel Defoe , born Daniel Foe, was an English trader, writer, journalist, and pamphleteer, who gained fame for his novel Robinson Crusoe. Defoe is notable for being one of the earliest proponents of the novel, as he helped to popularise the form in Britain and along with others such as Richardson,...
made Robinson Crusoe
Robinson Crusoe
Robinson Crusoe is a novel by Daniel Defoe that was first published in 1719. Epistolary, confessional, and didactic in form, the book is a fictional autobiography of the title character—a castaway who spends 28 years on a remote tropical island near Trinidad, encountering cannibals, captives, and...
stay in Tobolsk from September 1703 to June 1704. After the Swedish
Sweden
Sweden , officially the Kingdom of Sweden , is a Nordic country on the Scandinavian Peninsula in Northern Europe. Sweden borders with Norway and Finland and is connected to Denmark by a bridge-tunnel across the Öresund....
defeat at Poltava
Poltava
Poltava is a city in located on the Vorskla River in central Ukraine. It is the administrative center of the Poltava Oblast , as well as the surrounding Poltava Raion of the oblast. Poltava's estimated population is 298,652 ....
in 1709, large numbers of prisoners were sent to Tobolsk. They numbered about 25% of the total population. Many POWs were not repatriated until the 1720s, and some of them settled permanently in Tobolsk.

After administrative division of the territory, Tobolsk remained the seat of the Governor-General of Western Siberia until the seat was moved to Omsk
Omsk
-History:The wooden fort of Omsk was erected in 1716 to protect the expanding Russian frontier along the Ishim and the Irtysh rivers against the Kyrgyz nomads of the Steppes...
in the 1820s or 1830s. Bowing to the city's authority, many Siberian towns, including Omsk, Tyumen
Tyumen
Tyumen is the largest city and the administrative center of Tyumen Oblast, Russia, located on the Tura River east of Moscow. Population: Tyumen is the oldest Russian settlement in Siberia. Founded in 16th century to support Russia's eastward expansion, the city has remained one of the most...
, and Tomsk
Tomsk
Tomsk is a city and the administrative center of Tomsk Oblast, Russia, located on the Tom River. One of the oldest towns in Siberia, Tomsk celebrated its 400th anniversary in 2004...
, had their original arms display the Tobolsk insignia. Omsk honors the legacy to this day.

Until the Russian Revolution of 1917
Russian Revolution of 1917
The Russian Revolution is the collective term for a series of revolutions in Russia in 1917, which destroyed the Tsarist autocracy and led to the creation of the Soviet Union. The Tsar was deposed and replaced by a provisional government in the first revolution of February 1917...
, the town served as the capital of Tobolsk Governorate. The chemist Dmitri Mendeleev
Dmitri Mendeleev
Dmitri Ivanovich Mendeleev , was a Russian chemist and inventor. He is credited as being the creator of the first version of the periodic table of elements...
and the painter Vasily Perov
Vasily Perov
Vasily Grigorevich Perov ; 2 January 1834 – 10 June 1882) was a Russian painter and one of the founding members of Peredvizhniki, a group of Russian realist painters....
are the most famous natives of the city. Some of the Decembrists were exiled and lived there as well. The town's importance declined when the Trans-Siberian Railway
Trans-Siberian Railway
The Trans-Siberian Railway is a network of railways connecting Moscow with the Russian Far East and the Sea of Japan. It is the longest railway in the world...
bypassed it in the 1890s.

In August 1917, after the February Revolution
February Revolution
The February Revolution of 1917 was the first of two revolutions in Russia in 1917. Centered around the then capital Petrograd in March . Its immediate result was the abdication of Tsar Nicholas II, the end of the Romanov dynasty, and the end of the Russian Empire...
, Tsar Nicholas II
Nicholas II of Russia
Nicholas II was the last Emperor of Russia, Grand Prince of Finland, and titular King of Poland. His official short title was Nicholas II, Emperor and Autocrat of All the Russias and he is known as Saint Nicholas the Passion-Bearer by the Russian Orthodox Church.Nicholas II ruled from 1894 until...
and his family were brought here to live in relative luxury in the former house of the Governor-General. After the White Army
White movement
The White movement and its military arm the White Army - known as the White Guard or the Whites - was a loose confederation of Anti-Communist forces.The movement comprised one of the politico-military Russian forces who fought...
approached the city in spring of 1918, the royal family was moved to Yekaterinburg
Yekaterinburg
Yekaterinburg is a major city in the central part of Russia, the administrative center of Sverdlovsk Oblast. Situated on the eastern side of the Ural mountain range, it is the main industrial and cultural center of the Urals Federal District with a population of 1,350,136 , making it Russia's...
and shot there, ending the imperial Romanov
Romanov
The House of Romanov was the second and last imperial dynasty to rule over Russia, reigning from 1613 until the February Revolution abolished the crown in 1917...
dynasty.

The economy of modern Tobolsk centers on a major oil refinery. Some traditional crafts, such as bone-carving, are also preserved.

Tobolsk is the only town in Siberia and one of the few in Russia which has a standing stone kremlin
Kremlin
A kremlin , same root as in kremen is a major fortified central complex found in historic Russian cities. This word is often used to refer to the best-known one, the Moscow Kremlin, or metonymically to the government that is based there...
(Tobolsk Kremlin
Tobolsk Kremlin
The Tobolsk Kremlin is the sole stone Kremlin in Siberia. It is located in Tobolsk, Tyumen Oblast, Russia.- History :Tobolsk was founded in 1587. Moscow encouraged the construction of stone buildings there. In 1683-1686, masons sent from Moscow and Veliky Ustyug built the stone St....
), or elaborate city-fortress, from the turn of the 17th and 18th centuries. Its white walls and towers with an ensemble of churches and palatial buildings spectacularly sited on a high river bank were proclaimed a national historical and architectural treasure in 1870.

The principal monuments in the kremlin are the Cathedral of St. Sophia (1683–1686), a merchant courtyard (1703–1705), an episcopal palace (1773–1775) (now it is a museum of local lore), and the so-called Swedish Chamber, with six baroque halls (1713–1716). The city contains some remarkable baroque and Neoclassical churches from the 18th and 19th centuries. Also noteworthy is a granite monument to Yermak, constructed to a design by Alexander Brullov
Alexander Brullov
Alexander Pavlovich Brullov was a Russian artist associated with the latest phase of the Russian Neoclassicism.Alexander Brullov was born in Saint Petersburg into a family of French artists: his great grandfather, his grandfather, his father and his brothers were artists. His first teacher was...
in 1839.The city's neighbourhood is rich in ancient kurgan
Kurgan
Kurgan is the Turkic term for a tumulus; mound of earth and stones raised over a grave or graves, originating with its use in Soviet archaeology, now widely used for tumuli in the context of Eastern European and Central Asian archaeology....
s and pagan shrines. Some of these date back to the 10th century BC.

Tobolsk is twinned
Town twinning
Twin towns and sister cities are two of many terms used to describe the cooperative agreements between towns, cities, and even counties in geographically and politically distinct areas to promote cultural and commercial ties.- Terminology :...
with: Council Bluffs
Council Bluffs, Iowa
Council Bluffs, known until 1852 as Kanesville, Iowathe historic starting point of the Mormon Trail and eventual northernmost anchor town of the other emigrant trailsis a city in and the county seat of Pottawattamie County, Iowa, United States and is on the east bank of the Missouri River across...
, United States
United States
The United States of America is a federal constitutional republic comprising fifty states and a federal district...
Pejë
Peje
Peje may refer to:* Peje, the nickname of Andrés Manuel López Obrador, a Mexican politician *Peje, a chiefdom of Sierra Leone, in the Pujehun District of the Southern Province...
, Kosovo
Kosovo
Kosovo is a region in southeastern Europe. Part of the Ottoman Empire for more than five centuries, later the Autonomous Province of Kosovo and Metohija within Serbia...