Nizhny Novgorod Oblast is not rich in natural resources, which are, mostly, limited to commercial deposits of sand (including titanium-zirconium sands), clay
Clay
Clay is a general term including many combinations of one or more clay minerals with traces of metal oxides and organic matter. Geologic clay deposits are mostly composed of phyllosilicate minerals containing variable amounts of water trapped in the mineral structure.- Formation :Clay minerals...
, gypsum
Gypsum
Gypsum is a very soft sulfate mineral composed of calcium sulfate dihydrate, with the chemical formula CaSO4·2H2O. It is found in alabaster, a decorative stone used in Ancient Egypt. It is the second softest mineral on the Mohs Hardness Scale...
, peat
Peat
Peat is an accumulation of partially decayed vegetation matter or histosol. Peat forms in wetland bogs, moors, muskegs, pocosins, mires, and peat swamp forests. Peat is harvested as an important source of fuel in certain parts of the world...
, mineral salt
Salt
In chemistry, salts are ionic compounds that result from the neutralization reaction of an acid and a base. They are composed of cations and anions so that the product is electrically neutral...
, and timber
Timber
Timber may refer to:* Timber, a term common in the United Kingdom and Australia for wood materials * Timber, Oregon, an unincorporated community in the U.S...
. 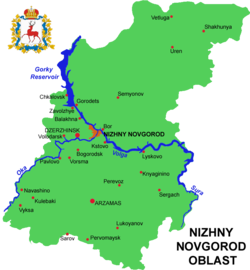 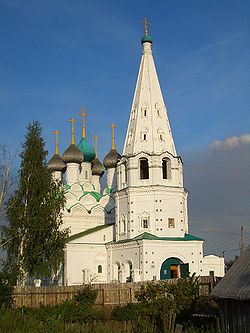 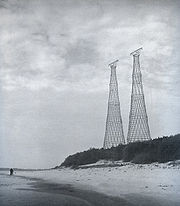 The unique architect
Architect
An architect is a person trained in the planning, design and oversight of the construction of buildings. To practice architecture means to offer or render services in connection with the design and construction of a building, or group of buildings and the space within the site surrounding the...
ural construction—the 128 metres (419.9 ft) steel
Steel
Steel is an alloy that consists mostly of iron and has a carbon content between 0.2% and 2.1% by weight, depending on the grade. Carbon is the most common alloying material for iron, but various other alloying elements are used, such as manganese, chromium, vanadium, and tungsten...
lattice hyperboloid tower
Shukhov tower on the Oka River
The Shukhov Tower on the Oka River is the world’s only hyperboloid electricity pylon. It is located in Russia, in the western suburbs of Nizhny Novgorod, on the left bank of the Oka River near Dzerzhinsk...
built by the Great Russian engineer and scientist Vladimir Grigorievich Shukhov
Vladimir Shukhov
Vladimir Grigoryevich Shukhov , was a Russian engineer-polymath, scientist and architect renowned for his pioneering works on new methods of analysis for structural engineering that led to breakthroughs in industrial design of world's first hyperboloid structures, lattice shell structures, tensile...
in 1929—is located near the town of Dzerzhinsk
Dzerzhinsk, Russia
Dzerzhinsk is a city in Nizhny Novgorod Oblast, Russia, situated along the Oka River, about east of Moscow. Population: The city is named after Feliks Edmundovich Dzerzhinsky, a Polish Bolshevik leader who was the first head of the Cheka ....
on the left bank of the Oka River
Oka River
Oka is a river in central Russia, the largest right tributary of the Volga. It flows through the regions of Oryol, Tula, Kaluga, Moscow, Ryazan, Vladimir, and Nizhny Novgorod and is navigable over a large part of its total length, as far upstream as to the town of Kaluga. Its length exceeds...
.

According to the 2002 Census
Russian Census (2002)
Russian Census of 2002 was the first census of the Russian Federation carried out on October 9 through October 16, 2002. It was carried out by the Russian Federal Service of State Statistics .-Resident population:...
, ethnic Russians
Russians
The Russian people are an East Slavic ethnic group native to Russia, speaking the Russian language and primarily living in Russia and neighboring countries....
at 3,346,398 made up 95% of the oblast's population. Other ethnic groups included Tatars
Tatars
Tatars are a Turkic speaking ethnic group , numbering roughly 7 million.The majority of Tatars live in the Russian Federation, with a population of around 5.5 million, about 2 million of which in the republic of Tatarstan.Significant minority populations are found in Uzbekistan, Kazakhstan,...
(50,609, or 1.4%), Mordva (25,022, or 0.7%), Ukrainians
Ukrainians
Ukrainians are an East Slavic ethnic group native to Ukraine, which is the sixth-largest nation in Europe. The Constitution of Ukraine applies the term 'Ukrainians' to all its citizens...
(24,241, or 0.7%), and various smaller groups, each accounting for less than 0.5% of the oblast's total population. 758 persons (0.02%) did not indicate their nationalities during the Census.

The population density is 48.5 people per square kilometer.

Nizhny Novgorod Oblast is one of the most multi-religious regions of Russia.

According to the Federal Migration Service, 20,450 foreign citizens were registered in the oblast in 2006. The actual number of foreigners residing in the oblast as of June 1, 2006 was estimated to be over 22,000.

The oblast ranks seventh in Russia in industrial output, while the processing industry predominates in the local economy. More than 650 industrial companies employ nearly 700 000 people, or 62% of the workforce involved in material production. Industry generates 83% of the regional GDP and makes 89% of all material expenditures. The leading sectors are engineering and metalworking, followed by the chemical and petrochemical industries and the forestry, woodworking, and paper industries. The first three sectors account for about 75% of all industrial production.

The oblast has traditionally been attractive to investors. In 2002, Moody's rating agency confirmed a Caa1rating based on the region's long-term foreign currency liabilities.

There are 650+ industrial companies in the region http://www.government.nnov.ru/?id=1463, most of them engaged in the following sectors:

These key industries are supplemented by other sectors of the economy such as agriculture, trade, services, communications and transport.