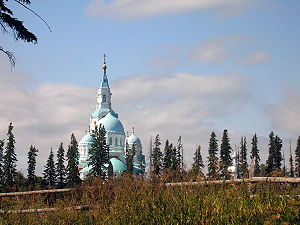 The Valaam Monastery, or Valamo Monastery is a stauropegic
Stauropegic
Stauropegic, also rendered stavropegic, stauropegial, or stavropegial is a title or description applied to Eastern Orthodox and Eastern Catholic Christian monasteries subordinated directly to a Patriarch or Synod, rather than to their local Bishop...
Orthodox
Eastern Orthodox Church
The Orthodox Church, officially called the Orthodox Catholic Church and commonly referred to as the Eastern Orthodox Church, is the second largest Christian denomination in the world, with an estimated 300 million adherents mainly in the countries of Belarus, Bulgaria, Cyprus, Georgia, Greece,...
monastery in Russian Karelia
Republic of Karelia
The Republic of Karelia is a federal subject of Russia .-Geography:The republic is located in the northwestern part of Russia, taking intervening position between the basins of White and Baltic seas...
, located on Valaam
Valaam
Valaam, also known historically by the Finnish name Valamo, is an archipelago in the northern portion of Lake Ladoga, lying within the Republic of Karelia, Russian Federation. The total area of its more than 50 islands is 36 km². The largest island is also called Valaam. It is best known as...
, the largest island in Lake Ladoga
Lake Ladoga
Lake Ladoga is a freshwater lake located in the Republic of Karelia and Leningrad Oblast in northwestern Russia, not far from Saint Petersburg. It is the largest lake in Europe, and the 14th largest lake by area in the world.-Geography:...
, the largest lake in Europe.

It is not clear when the monastery was founded. As the cloister is not mentioned in documents before the 16th century, different dates - from 10th to 15th centuries - have been expounded. According to one tradition, the monastery was founded by a 10th century Greek monk, Sergius
Sergius of Valaam
Saint Sergius of Valaam was a Greek monk and wonderworker credited with bringing Orthodox Christianity to Karelian and Finnish people. Conflicting church traditions place him possibly as early as the 10th century or as late as the 14th....
, and his Karelian companion, Herman
Herman of Valaam
Herman of Valaam - a saint of the Russian Orthodox Church. Herman of Valaam together with Sergius of Valaam are considered to be the founders of the Valaam Monastery...
. Heikki Kirkinen inclines to date the foundation of the monastery to the 12th century. Contemporary historians consider even this date too early. According to the scholarly consensus, the monastery was founded at some point towards the end of the 14th century. John H. Lind and Michael C. Paul date the founding to between 1389 and 1393 based on various sources, including the "Tale of the Valaamo Monastery," a sixteenth century manuscript, which has the monstery founded during the archiepiscopate of Ioann II
Ioann (Archbishop of Novgorod)
Ioann was Archbishop of Novgorod the Great and Pskov from 1388 until his retirement in 1415. He is not to be confused with Archbishop Ilya, who ruled in the twelfth century and who is often referred to as Ioann in hagiographic literature, but was apparently called Ilya during his...
of Novgorod.

The power struggle between Russia
Russia
Russia or , officially known as both Russia and the Russian Federation , is a country in northern Eurasia. It is a federal semi-presidential republic, comprising 83 federal subjects...
ns and Swedes
Sweden
Sweden , officially the Kingdom of Sweden , is a Nordic country on the Scandinavian Peninsula in Northern Europe. Sweden borders with Norway and Finland and is connected to Denmark by a bridge-tunnel across the Öresund....
pushed the border eastwards in the 16th century; in 1578 the monastery was attacked and numerous monks and novices were killed by the Lutheran Swedes. The monastery was desolate between 1611 and 1715 after another attack of the Swedes, the buildings being burnt to the ground and the Karelian border between Russia and Sweden being drawn through Lake Ladoga. In the 18th century the monastery was magnificently restored, and in 1812 it came under the Russian Grand Duchy of Finland
Grand Duchy of Finland
The Grand Duchy of Finland was the predecessor state of modern Finland. It existed 1809–1917 as part of the Russian Empire and was ruled by the Russian czar as Grand Prince.- History :...
.
In 1917, Finland
Finland
Finland , officially the Republic of Finland, is a Nordic country situated in the Fennoscandian region of Northern Europe. It is bordered by Sweden in the west, Norway in the north and Russia in the east, while Estonia lies to its south across the Gulf of Finland.Around 5.4 million people reside...
became independent, and the Finnish Orthodox Church
Finnish Orthodox Church
The Finnish Orthodox Church is an autonomous Orthodox archdiocese of the Patriarchate of Constantinople. The Church has a legal position as a national church in the country, along with the Evangelical Lutheran Church of Finland....
became autonomous under the Orthodox Church of Constantinople, as previously it had been a part of the Russian Orthodox Church
Russian Orthodox Church
The Russian Orthodox Church or, alternatively, the Moscow Patriarchate The ROC is often said to be the largest of the Eastern Orthodox churches in the world; including all the autocephalous churches under its umbrella, its adherents number over 150 million worldwide—about half of the 300 million...
. Valaam (Valamo) was the most important monastery of the Finnish Orthodox Church. The liturgic language was changed from Church Slavonic to Finnish
Finnish language
Finnish is the language spoken by the majority of the population in Finland Primarily for use by restaurant menus and by ethnic Finns outside Finland. It is one of the two official languages of Finland and an official minority language in Sweden. In Sweden, both standard Finnish and Meänkieli, a...
, and the liturgic calendar from the Julian
Julian calendar
The Julian calendar began in 45 BC as a reform of the Roman calendar by Julius Caesar. It was chosen after consultation with the astronomer Sosigenes of Alexandria and was probably designed to approximate the tropical year .The Julian calendar has a regular year of 365 days divided into 12 months...
to the Gregorian calendar
Gregorian calendar
The Gregorian calendar, also known as the Western calendar, or Christian calendar, is the internationally accepted civil calendar. It was introduced by Pope Gregory XIII, after whom the calendar was named, by a decree signed on 24 February 1582, a papal bull known by its opening words Inter...
. These changes led to bitter decade-long disputes in the monastic community of Valaam.

From 1941 to 1944, during the Continuation War
Continuation War
The Continuation War was the second of two wars fought between Finland and the Soviet Union during World War II.At the time of the war, the Finnish side used the name to make clear its perceived relationship to the preceding Winter War...
, an attempt was made to restore the monastery buildings at Old Valaam, but later the island served as a Soviet military base.

Since the original Valaam Monastery was bequeathed back to the Orthodox Church in 1989, it has been enjoying the personal patronage of Patriarch Alexey II, who frequented the cloister when a child. The monastery, whose buildings have been meticulously restored, has gained significant legal power over the island, in a push to return to a state of spiritual seclusion. After years of fruitless legal proceedings with the monastery, many residents of the island chose to leave, though a few still remain.

The monastery of Valaam has a unique tradition of singing, called the Valaam chant, that combines some features of Byzantine and Znamenny chants. Thus, as in Byzantine chant, the singing is always 2-parts, comprising a melody and an ison
Ison (music)
Ison is a drone note, or a slow-moving lower vocal part, used in Byzantine chant and some related musical traditions to accompany the melody, thus enriching the singing, at the same time not transforming it into a harmonized or polyphonic piece.- History :...
, but, as in Znamenny chant, the scale structure is always diatonic, the ornamentation
Ornament (music)
In music, ornaments or embellishments are musical flourishes that are not necessary to carry the overall line of the melody , but serve instead to decorate or "ornament" that line. Many ornaments are performed as "fast notes" around a central note...
is simplified in comparison with Byzantine chant, and the melodies are more similar to that of ancient Znamenny Chant, at the edge of being considered a local variety of this tradition. These relative simplicity became one of the reasons for the experimental introduction of Valaam chanting in various parishes across Russia by the end of 20th century.

The monastery has a professional five-strong male-voice choir which tours the world to raise money for the on-going restoration of the buildings. Some of its music can be heard at the monastery's website.