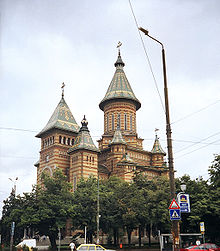 The Timişoara Orthodox Cathedral (Catedrala Ortodoxă) is a Romanian Orthodox
Romanian Orthodox Church
The Romanian Orthodox Church is an autocephalous Eastern Orthodox church. It is in full communion with other Eastern Orthodox churches, and is ranked seventh in order of precedence. The Primate of the church has the title of Patriarch...
cathedral
Cathedral
A cathedral is a Christian church that contains the seat of a bishop...
in Timişoara
Timisoara
Timișoara is the capital city of Timiș County, in western Romania. One of the largest Romanian cities, with an estimated population of 311,586 inhabitants , and considered the informal capital city of the historical region of Banat, Timișoara is the main social, economic and cultural center in the...
, Romania
Romania
Romania is a country located at the crossroads of Central and Southeastern Europe, on the Lower Danube, within and outside the Carpathian arch, bordering on the Black Sea...
. It was built between 1937 and 1940. It is dedicated to the Three Holy Hierarchs
Three Holy Hierarchs
The Three Holy Hierarchs of Eastern Christianity refers to Basil the Great , Gregory the Theologian and John Chrysostom. They were highly influential bishops of the early church who played pivotal roles in shaping Christian theology...
, Saints Basil the Great
Basil of Caesarea
Basil of Caesarea, also called Saint Basil the Great, was the bishop of Caesarea Mazaca in Cappadocia, Asia Minor . He was an influential 4th century Christian theologian...
, Gregory the Theologian, and John Chrysostom
John Chrysostom
John Chrysostom , Archbishop of Constantinople, was an important Early Church Father. He is known for his eloquence in preaching and public speaking, his denunciation of abuse of authority by both ecclesiastical and political leaders, the Divine Liturgy of St. John Chrysostom, and his ascetic...
. It has 11 towers, of which the central and the highest has a height of 96 meters.

It is home to many valuable religious objects such as old icons
Romanian icons
In the Romanian Orthodox Church, icons serve much the same purpose as they do in other Eastern Orthodox traditions. The art of painting them has survived communism and today there are many active icon painters in Romania....
and early writings in Romanian
Romanian language
Romanian Romanian Romanian (or Daco-Romanian; obsolete spellings Rumanian, Roumanian; self-designation: română, limba română ("the Romanian language") or românește (lit. "in Romanian") is a Romance language spoken by around 24 to 28 million people, primarily in Romania and Moldova...
, such as the 1648 Noul Testament de la Bălgrad ("The New Testament
New Testament
The New Testament is the second major division of the Christian biblical canon, the first such division being the much longer Old Testament....
of Bălgrad") and the 1643 Cazania lui Varlaam ("The Homiliary of Metropolitan Varlaam").

The building's style is quite unusual among Romanian Orthodox buildings, although it is partly based on local religious tradition and partly on Byzantine architecture
Byzantine architecture
Byzantine architecture is the architecture of the Byzantine Empire. The empire gradually emerged as a distinct artistic and cultural entity from what is today referred to as the Roman Empire after AD 330, when the Roman Emperor Constantine moved the capital of the Roman Empire east from Rome to...
(the style developed by Moldavia
Moldavia
Moldavia is a geographic and historical region and former principality in Eastern Europe, corresponding to the territory between the Eastern Carpathians and the Dniester river...
n and Byzantine
Byzantine Empire
The Byzantine Empire was the Eastern Roman Empire during the periods of Late Antiquity and the Middle Ages, centred on the capital of Constantinople. Known simply as the Roman Empire or Romania to its inhabitants and neighbours, the Empire was the direct continuation of the Ancient Roman State...
artisans had transplanted and adapted). Elements such as niches
Niche (architecture)
A niche in classical architecture is an exedra or an apse that has been reduced in size, retaining the half-dome heading usual for an apse. Nero's Domus Aurea was the first semi-private dwelling that possessed rooms that were given richly varied floor plans, shaped with niches and exedras;...
under the eaves, starry vaulting
Vault (architecture)
A Vault is an architectural term for an arched form used to provide a space with a ceiling or roof. The parts of a vault exert lateral thrust that require a counter resistance. When vaults are built underground, the ground gives all the resistance required...
in the interior, and lacquer
Lacquer
In a general sense, lacquer is a somewhat imprecise term for a clear or coloured varnish that dries by solvent evaporation and often a curing process as well that produces a hard, durable finish, in any sheen level from ultra matte to high gloss and that can be further polished as required...
ed discs in a variety of colors, can be seen in monasteries such as Cozia
Cozia Monastery
Cozia Monastery, erected close to Călimănești by Mircea cel Bătrân in 1388 and housing his tomb, is one of the most valuable monuments of national medieval art and architecture in Romania....
or Prislop (both built in the 14th century and based on guidelines devised by the monk Nicodim of Prilep).

The church's interior and exterior paintings were created by the painter Atanasie Demian. The difficult period that followed the structure's completion (see Romania during World War II
Romania during World War II
Following the outbreak of World War II on 1 September 1939, the Kingdom of Romania officially adopted a position of neutrality. However, the rapidly changing situation in Europe during 1940, as well as domestic political upheaval, undermined this stance. Fascist political forces such as the Iron...
) prevented the paintings from being finished on time, so this work went on for many years after World War II
World War II
World War II, or the Second World War , was a global conflict lasting from 1939 to 1945, involving most of the world's nations—including all of the great powers—eventually forming two opposing military alliances: the Allies and the Axis...
.