The following is a list of rulers during the history of Bavaria
History of Bavaria
The history of Bavaria stretches from its earliest settlement and its formation as a stem duchy in the 6th century through its inclusion in the Holy Roman Empires to its status as an independent kingdom and, finally, as a large and significant Bundesland of the modern Federal Republic of...
. Bavaria
Bavaria
Bavaria, formally the Free State of Bavaria is a state of Germany, located in the southeast of Germany. With an area of , it is the largest state by area, forming almost 20% of the total land area of Germany...
was ruled by several duke
Duke
A duke or duchess is a member of the nobility, historically of highest rank below the monarch, and historically controlling a duchy...
s and kings
Monarch
A monarch is the person who heads a monarchy. This is a form of government in which a state or polity is ruled or controlled by an individual who typically inherits the throne by birth and occasionally rules for life or until abdication...
, partitioned and reunited, under several dynasties
Dynasty
A dynasty is a sequence of rulers considered members of the same family. Historians traditionally consider many sovereign states' history within a framework of successive dynasties, e.g., China, Ancient Egypt and the Persian Empire...
. Since 1949 Bavaria has been a democratic state
States of Germany
Germany is made up of sixteen which are partly sovereign constituent states of the Federal Republic of Germany. Land literally translates as "country", and constitutionally speaking, they are constituent countries...
in Federal Republic of Germany
Germany
Germany , officially the Federal Republic of Germany , is a federal parliamentary republic in Europe. The country consists of 16 states while the capital and largest city is Berlin. Germany covers an area of 357,021 km2 and has a largely temperate seasonal climate...
.


Around 548 the kings of the Franks
Franks
The Franks were a confederation of Germanic tribes first attested in the third century AD as living north and east of the Lower Rhine River. From the third to fifth centuries some Franks raided Roman territory while other Franks joined the Roman troops in Gaul. Only the Salian Franks formed a...
placed the border region of Bavaria under the administration of a duke — possibly Frankish or possibly chosen from amongst the local leading families — who was supposed to act as a regional governor for the Frankish king. The first duke we know of, and likely the first, was Gariwald, or Garibald I, a member of the powerful Agilolfing family
Agilolfings
The Agilolfings were a family of either Frankish or Bavarian nobility that ruled the Duchy of Bavaria on behalf of their Merovingian suzerains from about 550 until 788...
. This was the beginning of a series of Agilolfing dukes that was to last until 788.


The Kings (later Emperors) of the Franks now assumed complete control, placing Bavaria under the rule of non-hereditary governors and civil servants. They were not Dukes but rather Kings of Bavaria. The Emperor Louis the Pious
Louis the Pious
Louis the Pious , also called the Fair, and the Debonaire, was the King of Aquitaine from 781. He was also King of the Franks and co-Emperor with his father, Charlemagne, from 813...
divided control of the Empire among his sons, and the divisions became permanent in the decades following his death in 840. The Frankish rulers controlled Bavaria as part of their possessions.


Luitpold, founder of the Luitpolding
Luitpolding
The Luitpoldings were a medieval dynasty which ruled the German stem duchy of Bavaria from some time in the late ninth century off and on until 985. The progenitor of the family was Margrave Luitpold of Bavaria , possibly a descendant of the Early medieval Huosi noble family and maybe related to...
dynasty, was not a Duke of Bavaria but a Margrave of Carinthia under the rule of Louis the Child. Frankish power had waned in the region due to Hungarian attacks, allowing the local rulers greater independence. Luitpold's son, Arnulf, claimed the title of Duke (implying full autonomy) in 911, and was recognized as such by the German King Henry the Fowler in 920.


From 947 until the 11th century, the kings of Germany repeatedly transferred Bavaria into different hands (including their own), never allowing any one family to establish itself. Bavaria was ruled by a series of short-lasting, mostly unrelated dynasties.


In 1070, Henry IV, Holy Roman Emperor
Henry IV, Holy Roman Emperor
Henry IV was King of the Romans from 1056 and Holy Roman Emperor from 1084 until his forced abdication in 1105. He was the third emperor of the Salian dynasty and one of the most powerful and important figures of the 11th century...
deposed duke Otto, granting the duchy instead to Welf I, Duke of Bavaria
Welf I, Duke of Bavaria
Welf I was duke of Bavaria from 1070 to 1077 and from 1096 to his death. He was the first member of the Welf branch of the House of Este. In the Welf genealogy he is counted as Welf IV.-Life and reign:...
, a member of the Italo-Bavarian family of Este. Welf I subsequently quarreled with King Henry and was deprived of his duchy for nineteen years, during which it was directly administered by the German crown. Welf I recovered the duchy in 1096, and was succeeded by his sons Welf II and Henry IX — the latter was succeeded by his son Henry X, who also became Duke of Saxony
Rulers of Saxony
This article lists Dukes, Electors, and Kings ruling over different territories named Saxony from the beginning of the Saxon Duchy in the 9th century to the end of the Saxon Kingdom in 1918.-Dukes of Saxony:...
. 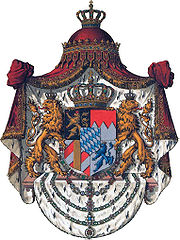 In 1180, Henry XII the Lion and Frederick I, Holy Roman Emperor
Frederick I, Holy Roman Emperor
Frederick I Barbarossa was a German Holy Roman Emperor. He was elected King of Germany at Frankfurt on 4 March 1152 and crowned in Aachen on 9 March, crowned King of Italy in Pavia in 1155, and finally crowned Roman Emperor by Pope Adrian IV, on 18 June 1155, and two years later in 1157 the term...
, fell out, and Frederick dispossessed the duke and gave his territory to Otto I Wittelsbach, Duke of Bavaria
Otto I Wittelsbach, Duke of Bavaria
Otto I , called the Redhead , was Duke of Bavaria from 1180 until his death. He was the first Bavarian ruler from the House of Wittelsbach, a dynasty which reigned until the abdication of King Ludwig III of Bavaria in the German Revolution of 1918.-Biography:Duke Otto I was probably born at...
of the House of Wittelsbach. Bavaria remained in the possession of various branches of the family until the First World War.

In 1253, on Otto II's death, Bavaria was divided between his sons. Henry became Duke of Lower Bavaria, and Louis of Upper Bavaria. From this point until the beginning of the 16th century, the territories were frequently divided between brothers, making the Dukes difficult to list.

In Lower Bavaria, Henry XIII was succeeded by his three sons, Otto III, Louis III, and Stephen I ruling jointly. Otto III's successor in the joint dukedom was his son Henry XV. Stephen's successors were his sons Otto IV and Henry XIV. Henry XIV's son was John I.

In Upper Bavaria, Louis II was succeeded by his sons Rudolf I and Louis IV. The latter was elected King of Germany in 1314. After John I's death in 1340, Louis IV unified the Bavarian duchy.

In 1805 under the Peace of Pressburg
Peace of Pressburg
The Peace of Pressburg refers to four peace treaties concluded in Pressburg . The fourth Peace of Pressburg of 1805 during the Napoleonic Wars is the best-known.-First:...
between the Napoleonic France
History of France
The history of France goes back to the arrival of the earliest human being in what is now France. Members of the genus Homo entered the area hundreds of thousands years ago, while the first modern Homo sapiens, the Cro-Magnons, arrived around 40,000 years ago...
and the Holy Roman Empire
Holy Roman Empire
The Holy Roman Empire was a realm that existed from 962 to 1806 in Central Europe.It was ruled by the Holy Roman Emperor. Its character changed during the Middle Ages and the Early Modern period, when the power of the emperor gradually weakened in favour of the princes...
several duchies were elevated to kingdoms. The Wittelsbach rulers of Bavaria held the title King of Bavaria from 1806 until 1918. The prince-elector
Prince-elector
The Prince-electors of the Holy Roman Empire were the members of the electoral college of the Holy Roman Empire, having the function of electing the Roman king or, from the middle of the 16th century onwards, directly the Holy Roman Emperor.The heir-apparent to a prince-elector was known as an...
of Bavaria, Maximilian IV Joseph formally assumed the title King Maximilian I of Bavaria on 1 January 1806. The well-known so called Märchenkönig (Fairy tale king) Ludwig II
Ludwig II of Bavaria
Ludwig II was King of Bavaria from 1864 until shortly before his death. He is sometimes called the Swan King and der Märchenkönig, the Fairy tale King...
constructed Neuschwanstein Castle, Herrenchiemsee
Herrenchiemsee
Herrenchiemsee is a complex of royal buildings on the Herreninsel, an island in the Chiemsee, Bavaria's largest lake, 60 km south east of Munich. Together with the neighbouring island of Frauenchiemsee and the uninhabited Krautinsel it forms the municipality of Chiemsee...
or Linderhof Palace during his reign (1864–1886). In 1918 Ludwig III
Ludwig III of Bavaria
Ludwig III , was the last King of Bavaria, reigning from 1913 to 1918.-Early life:...
lost his throne in the German Revolution of 1918–1919.

In 1918 — at the end of the First World War
World War I
World War I , which was predominantly called the World War or the Great War from its occurrence until 1939, and the First World War or World War I thereafter, was a major war centred in Europe that began on 28 July 1914 and lasted until 11 November 1918...
in the German Revolution of 1918–1919  Bavaria became a democratic
Democracy
Democracy is generally defined as a form of government in which all adult citizens have an equal say in the decisions that affect their lives. Ideally, this includes equal participation in the proposal, development and passage of legislation into law...
republic in the Weimar Republic
Weimar Republic
The Weimar Republic is the name given by historians to the parliamentary republic established in 1919 in Germany to replace the imperial form of government...
; the name for the period of Germany from 1919 to 1933. Since then the rulers of Bavaria are minister presidents
Minister-President
A minister-president is the head of government in a number of European countries or subnational governments, in which a parliamentary or semi-presidential system of government prevails, who presides over the council of ministers...
.

For later rulers, see List of Ministers-President of Bavaria.