Encyclopedia
Luitpold, Prince Regent of Bavaria (12 March 1821 – 12 December 1912), was the de facto
De facto
De facto is a Latin expression that means "concerning fact." In law, it often means "in practice but not necessarily ordained by law" or "in practice or actuality, but not officially established." It is commonly used in contrast to de jure when referring to matters of law, governance, or...
ruler of Bavaria
Bavaria
Bavaria, formally the Free State of Bavaria is a state of Germany, located in the southeast of Germany. With an area of , it is the largest state by area, forming almost 20% of the total land area of Germany...
from 1886 to 1912, due to the incapacity of his nephews, King Ludwig II
Ludwig II of Bavaria
Ludwig II was King of Bavaria from 1864 until shortly before his death. He is sometimes called the Swan King and der Märchenkönig, the Fairy tale King...
and King Otto. 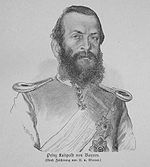 Luitpold was born in Würzburg
Würzburg
Würzburg is a city in the region of Franconia which lies in the northern tip of Bavaria, Germany. Located at the Main River, it is the capital of the Regierungsbezirk Lower Franconia. The regional dialect is Franconian....
, the third son of King Ludwig I of Bavaria
Ludwig I of Bavaria
Ludwig I was a German king of Bavaria from 1825 until the 1848 revolutions in the German states.-Crown prince:...
and of his wife, Therese of Saxe-Hildburghausen
Therese of Saxe-Hildburghausen
Therese Charlotte Luise of Saxony-Hildburghausen was a queen of Bavaria.She was a daughter of Frederick, Duke of Saxe-Altenburg, and Duchess Charlotte Georgine of Mecklenburg-Strelitz, eldest daughter of Charles II, Grand Duke of Mecklenburg-Strelitz.-Biography:In 1809, she was on the list of...
. He was the younger brother of King Maximilian II of Bavaria
Maximilian II of Bavaria
Maximilian II of Bavaria was king of Bavaria from 1848 until 1864. He was son of Ludwig I of Bavaria and Therese of Saxe-Hildburghausen.-Crown Prince:...
and of King Otto of Greece
Otto of Greece
Otto, Prince of Bavaria, then Othon, King of Greece was made the first modern King of Greece in 1832 under the Convention of London, whereby Greece became a new independent kingdom under the protection of the Great Powers .The second son of the philhellene King Ludwig I of Bavaria, Otto ascended...
. In addition to being in line to the throne of Bavaria, Luitpold was also heir presumptive
Heir Presumptive
An heir presumptive or heiress presumptive is the person provisionally scheduled to inherit a throne, peerage, or other hereditary honour, but whose position can be displaced by the birth of an heir or heiress apparent or of a new heir presumptive with a better claim to the position in question...
to the throne of Greece since his brother Otto had no children. However, the Greek law of succession required that Otto's heir belong to the Eastern Orthodox Church
Eastern Orthodox Church
The Orthodox Church, officially called the Orthodox Catholic Church and commonly referred to as the Eastern Orthodox Church, is the second largest Christian denomination in the world, with an estimated 300 million adherents mainly in the countries of Belarus, Bulgaria, Cyprus, Georgia, Greece,...
. Otto was deposed in 1862 and replaced by a Danish prince who became King George I of Greece
George I of Greece
George I was King of Greece from 1863 to 1913. Originally a Danish prince, George was only 17 years old when he was elected king by the Greek National Assembly, which had deposed the former king Otto. His nomination was both suggested and supported by the Great Powers...
. Otto died in 1867, leaving Luitpold and his descendants as representatives of Otto's claim; however, Luitpold never pursued this.

Already with the age of fourteen Luitpold joined the Bavarian army and was promoted captain of the artillery in 1835. During the revolutions of 1848
Revolutions of 1848 in the German states
The Revolutions of 1848 in the German states, also called the March Revolution – part of the Revolutions of 1848 that broke out in many countries of Europe – were a series of loosely coordinated protests and rebellions in the states of the German Confederation, including the Austrian Empire...
Prince Luitpold mediated and facilitated an audience of discontented citizens with his father. During the rule of his brother Maximilian II (1848–64), Luitpold did not play a significant political role. With the reign of his nephew Ludwig II
Ludwig II of Bavaria
Ludwig II was King of Bavaria from 1864 until shortly before his death. He is sometimes called the Swan King and der Märchenkönig, the Fairy tale King...
(1864–1886) Prince Luitpold had increasingly to represent the royal house due to the king's long absence from the capital. In the Austro-Prussian War
Austro-Prussian War
The Austro-Prussian War was a war fought in 1866 between the German Confederation under the leadership of the Austrian Empire and its German allies on one side and the Kingdom of Prussia with its German allies and Italy on the...
in 1866 Luitpold was commander of the 3rd Division. In 1869 he became Inspector General of the Bavarian army, during the Franco-Prussian War
Franco-Prussian War
The Franco-Prussian War or Franco-German War, often referred to in France as the 1870 War was a conflict between the Second French Empire and the Kingdom of Prussia. Prussia was aided by the North German Confederation, of which it was a member, and the South German states of Baden, Württemberg and...
1870/71 he represented Bavaria in the staff headquarters. As such he handed over on 3 December 1870 Ludwig's Kaiserbrief to the Prussian King William I offering the crown of the German Empire
German Empire
The German Empire refers to Germany during the "Second Reich" period from the unification of Germany and proclamation of Wilhelm I as German Emperor on 18 January 1871, to 1918, when it became a federal republic after defeat in World War I and the abdication of the Emperor, Wilhelm II.The German...
. In 1876 Luitpold was appointed field marshal. 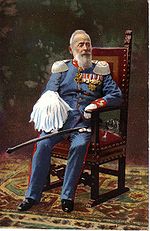 On 10 June 1886, Luitpold's nephew King Ludwig II was declared mentally incompetent and Luitpold was named Regent
Prince Regent
A prince regent is a prince who rules a monarchy as regent instead of a monarch, e.g., due to the Sovereign's incapacity or absence ....
. Luitpold's part is still controversial. Following Ludwig II's mysterious death a few days later, Luitpold continued to serve as regent for the new king, Otto, Ludwig's insane brother. Prince Luitpold was even accused by some people to be the murderer of his nephew, but soon the decent and affable prince became one of Bavaria's most popular rulers. One of his first actions (on 1 August 1886) was to open several of the palaces of Ludwig II to the public.

During the regency of Prince-Regent Luitpold relations between Bavarians and Prussia
Prussia
Prussia was a German kingdom and historic state originating out of the Duchy of Prussia and the Margraviate of Brandenburg. For centuries, the House of Hohenzollern ruled Prussia, successfully expanding its size by way of an unusually well-organized and effective army. Prussia shaped the history...
ns remained cold with Bavarians remembering the anti-Catholic agenda of Bismarck's Kulturkampf
Kulturkampf
The German term refers to German policies in relation to secularity and the influence of the Roman Catholic Church, enacted from 1871 to 1878 by the Prime Minister of Prussia, Otto von Bismarck. The Kulturkampf did not extend to the other German states such as Bavaria...
as well as Prussia's strategic dominance over the empire
German Empire
The German Empire refers to Germany during the "Second Reich" period from the unification of Germany and proclamation of Wilhelm I as German Emperor on 18 January 1871, to 1918, when it became a federal republic after defeat in World War I and the abdication of the Emperor, Wilhelm II.The German...
. With the Centre
Centre Party (Germany)
The German Centre Party was a Catholic political party in Germany during the Kaiserreich and the Weimar Republic. Formed in 1870, it battled the Kulturkampf which the Prussian government launched to reduce the power of the Catholic Church...
politician Georg von Hertling the prince regent appointed to the head of government for the first time a representative of the Landtag's
Landtag of Bavaria
The Landtag of Bavaria is the unicameral legislature of the state of Bavaria in Germany. Between 1946 and 1999 there was an upper house, the Senate of Bavaria. The parliament meets in the Maximilianeum....
majority .

Luitpold continued to serve as regent until his death of bronchitis in 1912 in Munich, when he was succeeded by his eldest son, Ludwig
Ludwig III of Bavaria
Ludwig III , was the last King of Bavaria, reigning from 1913 to 1918.-Early life:...
. He is buried in the crypt of the Theatinerkirche in Munich. 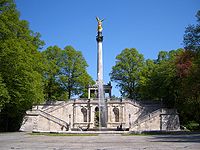 Tutored as a child by Domenico Quaglio the Younger
Domenico Quaglio the Younger
Domenico Quaglio the Younger was a German painter, engraver, stage designer, and architect. He was the second son of Giuseppe Quaglio and part of the large Quaglio pedigree of Italian artists involved in architecture, indoor fresco decoration, and scenography for the court theaters. He known as a...
, Luitpold had a great feeling for art. Luitpold's years as regent were marked by tremendous artistic and cultural activity in Bavaria where they are known as the Prinzregentenjahre ("The Prince Regent Years") or the Prinzregentenzeit. Bavaria prospered under a liberal government and Munich became a cultural centre of Europe. Thomas Mann
Thomas Mann
Thomas Mann was a German novelist, short story writer, social critic, philanthropist, essayist, and 1929 Nobel Prize laureate, known for his series of highly symbolic and ironic epic novels and novellas, noted for their insight into the psychology of the artist and the intellectual...
wrote about this period "Munich shone" (1902 Gladius Dei). Schwabing
Schwabing
Schwabing is a borough in the northern part of Munich, the capital of the German state of Bavaria. It is divided into the city borough 4 and the city borough 12...
became an important artists' quarter in Munich.

There are numerous streets in Bavarian cities and towns called Prinzregentenstrasse or Luitpoldstrasse. Many institutions are named in Luitpold's honour including the Prinzregententheater
Prinzregententheater
The Prinzregententheater, or Prince Regent's Theatre, is a theatre and opera house located at 12 Prinzregentenplatz in the Bavarian city of Munich, Germany.- Building and History :...
in Munich
Munich
Munich The city's motto is "" . Before 2006, it was "Weltstadt mit Herz" . Its native name, , is derived from the Old High German Munichen, meaning "by the monks' place". The city's name derives from the monks of the Benedictine order who founded the city; hence the monk depicted on the city's coat...
and the Luitpoldarena and the Luitpoldhalle in Nürnberg. In 1891 Luitpold established the Luitpold Gymnasium
Luitpold Gymnasium
The Luitpold-Gymnasium is a secondary school in Munich, Germany. It was established by Prince Luitpold of Bavaria in 1891 as "Luitpold-Kreisrealschule" to serve the eastern part of the city and its suburbs...
in Munich. Prinzregententorte
Prinzregententorte
Prinzregententorte is a bavarian cake, which consists of at least six thin layers of sponge cake interlaid with chocolate buttercream. The exterior is covered in a dark chocolate glaze....
is a multi-layered cake with chocolate butter cream named in his honour.

Luitpold's great passion next to the arts was hunting, his legendary hunts took place in the entire kingdom.

On 1 April 1844, in Florence
Florence
Florence is the capital city of the Italian region of Tuscany and of the province of Florence. It is the most populous city in Tuscany, with approximately 370,000 inhabitants, expanding to over 1.5 million in the metropolitan area....
, Luitpold married Archduchess Augusta of Austria, second daughter of Grand Duke Leopold II of Tuscany
Leopold II, Grand Duke of Tuscany
Leopold II of Tuscany was the last reigning grand duke of Tuscany ....
. Luitpold and Augusta had four children: