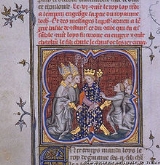 Encyclopedia
Carloman (830 – 29 September 880) was the eldest son of Louis the German
Louis the German
Louis the German , also known as Louis II or Louis the Bavarian, was a grandson of Charlemagne and the third son of the succeeding Frankish Emperor Louis the Pious and his first wife, Ermengarde of Hesbaye.He received the appellation 'Germanicus' shortly after his death in recognition of the fact...
, king of East Francia (Germany
Germany
Germany , officially the Federal Republic of Germany , is a federal parliamentary republic in Europe. The country consists of 16 states while the capital and largest city is Berlin. Germany covers an area of 357,021 km2 and has a largely temperate seasonal climate...
), and Hemma
Hemma
Emma of Altdorf, also known as Hemma was the wife of Louis the German, and Queen consort of Eastern Francia.Her father was Welf, Count of Altorf; her mother was Heilwig of Saxony , the daughter of Count Isanbart...
, daughter of the count Welf
Welf (father of Judith)
Welf I of Altorf was the son of the 9th century Frankish count Rothard of Metz, to whom the sons of Charles Martel entrusted half of Alemannia. Welf was master of several counties in the southern Rhineland & Bavaria. His family became politically powerful when Louis the Pious chose his oldest...
. He was king of Bavaria from 876 and of Italy
Italy
Italy , officially the Italian Republic languages]] under the European Charter for Regional or Minority Languages. In each of these, Italy's official name is as follows:;;;;;;;;), is a unitary parliamentary republic in South-Central Europe. To the north it borders France, Switzerland, Austria and...
from 877 until he was incapacitated in 879 and died in 880.

He revolted in 861 and again two years later (863); an example that was followed by the second son, Louis the Younger
Louis the Younger
Louis the Younger , sometimes Louis III, was the second eldest of the three sons of Louis the German and Emma. He succeeded his father as the King of Saxony on 28 August 876 and his elder brother Carloman as King of Bavaria from 880...
, who in a further rising was joined by his brother Charles the Fat
Charles the Fat
Charles the Fat was the King of Alemannia from 876, King of Italy from 879, western Emperor from 881, King of East Francia from 882, and King of West Francia from 884. In 887, he was deposed in East Francia, Lotharingia, and possibly Italy, where the records are not clear...
. In 865, Louis was obliged by the dissidence of his sons to provide for the eventual division of his territories: Carloman was promised the kingdom of Bavaria
Bavaria
Bavaria, formally the Free State of Bavaria is a state of Germany, located in the southeast of Germany. With an area of , it is the largest state by area, forming almost 20% of the total land area of Germany...
(which Louis himself had once held under his father), together with the Ostmark; Louis the Younger was promised Saxony
Saxony
The Free State of Saxony is a landlocked state of Germany, contingent with Brandenburg, Saxony Anhalt, Thuringia, Bavaria, the Czech Republic and Poland. It is the tenth-largest German state in area, with of Germany's sixteen states....
, together with Franconia
Franconia
Franconia is a region of Germany comprising the northern parts of the modern state of Bavaria, a small part of southern Thuringia, and a region in northeastern Baden-Württemberg called Tauberfranken...
and Thuringia
Thuringia
The Free State of Thuringia is a state of Germany, located in the central part of the country.It has an area of and 2.29 million inhabitants, making it the sixth smallest by area and the fifth smallest by population of Germany's sixteen states....
; Charles the Fat was promised Swabia
Swabia
Swabia is a cultural, historic and linguistic region in southwestern Germany.-Geography:Like many cultural regions of Europe, Swabia's borders are not clearly defined...
, together with Rhaetia.

A report that Emperor Louis II was dead led to peace between father and sons and attempts by Louis the German to gain the imperial crown for Carloman. These efforts were thwarted by Louis II, who was not in fact dead. In 876, Louis the German died and his sons inherited their lands; Carloman thus became King of Bavaria. The brothers maintained concord amongst themselves, contrary the example set by their own father and uncles and their cousins.

Upon the death of Charles the Bald
Charles the Bald
Charles the Bald , Holy Roman Emperor and King of West Francia , was the youngest son of the Emperor Louis the Pious by his second wife Judith.-Struggle against his brothers:He was born on 13 June 823 in Frankfurt, when his elder...
of West Francia in 877, Carloman also became king of Italy
King of Italy
King of Italy is a title adopted by many rulers of the Italian peninsula after the fall of the Roman Empire...
and aimed at gaining the Imperial crown, but in 879, he was crippled by a stroke
Stroke
A stroke, previously known medically as a cerebrovascular accident , is the rapidly developing loss of brain function due to disturbance in the blood supply to the brain. This can be due to ischemia caused by blockage , or a hemorrhage...
and divided his dominions as his father had done. He granted Louis Bavaria and Charles Italy. He had no legitimate issue, but had a concubine named Litwinde. His illegitimate son by her, Arnulf
Arnulf of Carinthia
Arnulf of Carinthia was the Carolingian King of East Francia from 887, the disputed King of Italy from 894 and the disputed Holy Roman Emperor from February 22, 896 until his death.-Birth and Illegitimacy:...
, was granted the duchy of Carinthia
Duchy of Carinthia
The Duchy of Carinthia was a duchy located in southern Austria and parts of northern Slovenia. It was separated from the Duchy of Bavaria in 976, then the first newly created Imperial State beside the original German stem duchies....
. Arnulf later became king of Germany and Italy and emperor
Holy Roman Emperor
The Holy Roman Emperor is a term used by historians to denote a medieval ruler who, as German King, had also received the title of "Emperor of the Romans" from the Pope...
.