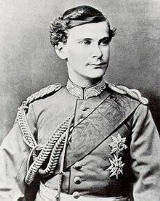 Encyclopedia
Otto was King of Bavaria
Bavaria
Bavaria, formally the Free State of Bavaria is a state of Germany, located in the southeast of Germany. With an area of , it is the largest state by area, forming almost 20% of the total land area of Germany...
from 1886 to 1913. He was the son of Maximilian II
Maximilian II of Bavaria
Maximilian II of Bavaria was king of Bavaria from 1848 until 1864. He was son of Ludwig I of Bavaria and Therese of Saxe-Hildburghausen.-Crown Prince:...
and his wife, Marie of Prussia
Marie of Prussia
Marie of Prussia was Queen of Bavaria and the mother of Kings Ludwig II and Otto of Bavaria.-Life:Born and raised in Berlin, she was the daughter of Prince Wilhelm of Prussia, a younger brother of King Friedrich Wilhelm III of Prussia, and his wife Landgravine Marie Anna of Hesse-Homburg...
, and younger brother of Ludwig II
Ludwig II of Bavaria
Ludwig II was King of Bavaria from 1864 until shortly before his death. He is sometimes called the Swan King and der Märchenkönig, the Fairy tale King...
. King Otto of Bavaria is not to be confused with King Otto of Greece
Otto of Greece
Otto, Prince of Bavaria, then Othon, King of Greece was made the first modern King of Greece in 1832 under the Convention of London, whereby Greece became a new independent kingdom under the protection of the Great Powers .The second son of the philhellene King Ludwig I of Bavaria, Otto ascended...
, who was his uncle and godfather
Godparent
A godparent, in many denominations of Christianity, is someone who sponsors a child's baptism. A male godparent is a godfather, and a female godparent is a godmother...
.

It is claimed Otto suffered from severe mental illness
Mental illness
A mental disorder or mental illness is a psychological or behavioral pattern generally associated with subjective distress or disability that occurs in an individual, and which is not a part of normal development or culture. Such a disorder may consist of a combination of affective, behavioural,...
. He was declared insane in 1875. The cause of his illness has not been revealed. He was kept confined in Fürstenried Palace
Fürstenried Palace
Fürstenried Palace is a Baroque palace in the southwest of Munich, Germany.-History:It was built by Joseph Effner for Elector Maximilian Emanuel in 1715–17 as a hunting lodge. Two pavilions are added each in the south and north of the main building....
under medical supervision from 1875 until his death.

The constitution of Bavaria was amended on 4 November 1913, to include a clause specifying that if a regency for reasons of incapacity lasted for ten years with no expectation that the King would ever be able to reign, the Regent could proclaim the end of the regency and assume the crown himself. 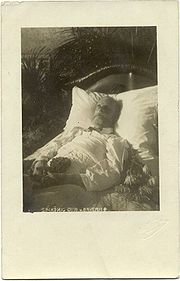 The following day, Otto was deposed by his cousin, Prince Regent Ludwig, who then assumed the title Ludwig III
Ludwig III of Bavaria
Ludwig III , was the last King of Bavaria, reigning from 1913 to 1918.-Early life:...
. The parliament assented on 6 November, and Ludwig III took the constitutional oath on 8 November. Otto was permitted to retain his title and honours until his death in 1916. In this time Bavaria had "two kings".

Otto's remains were interred in the crypt
Crypt
In architecture, a crypt is a stone chamber or vault beneath the floor of a burial vault possibly containing sarcophagi, coffins or relics....
of the Michaelskirche in Munich. Bavarian tradition called for the heart of the king to be placed in a silver urn and sent to the Gnadenkapelle (Chapel of the Miraculous Image) in Altötting
Altötting
Altötting is a town in Bavaria, capital of the district Altötting.This small town is famous for the Gnadenkapelle , one of the most-visited shrines in Germany. This is a tiny octagonal chapel which keeps a venerated statue of the Virgin Mary...
, beside those of his brother
Ludwig II of Bavaria
Ludwig II was King of Bavaria from 1864 until shortly before his death. He is sometimes called the Swan King and der Märchenkönig, the Fairy tale King...
, father
Maximilian II of Bavaria
Maximilian II of Bavaria was king of Bavaria from 1848 until 1864. He was son of Ludwig I of Bavaria and Therese of Saxe-Hildburghausen.-Crown Prince:...
and grandfather
Ludwig I of Bavaria
Ludwig I was a German king of Bavaria from 1825 until the 1848 revolutions in the German states.-Crown prince:...
.