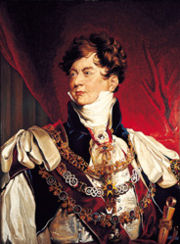 
A prince regent (or prince-regent) is a prince
Prince
Prince is a general term for a ruler, monarch or member of a monarch's or former monarch's family, and is a hereditary title in the nobility of some European states. The feminine equivalent is a princess...
who rules a monarchy as regent
Regent
A regent, from the Latin regens "one who reigns", is a person selected to act as head of state because the ruler is a minor, not present, or debilitated. Currently there are only two ruling Regencies in the world, sovereign Liechtenstein and the Malaysian constitutive state of Terengganu...
instead of a monarch
Monarch
A monarch is the person who heads a monarchy. This is a form of government in which a state or polity is ruled or controlled by an individual who typically inherits the throne by birth and occasionally rules for life or until abdication...
, e.g., due to the Sovereign's incapacity (minority or illness) or absence (remoteness, such as exile or long voyage, or simply no incumbent).
While the term itself can have the generic meaning and refer to any prince who fills the role of regent, historically it has mainly been used to describe a small number of individual Princes who were Regents.


Prince Regent in the United Kingdom

In the English language the title Prince Regent is most commonly associated with George IV
George IV of the United Kingdom
George IV was the King of the United Kingdom of Great Britain and Ireland and also of Hanover from the death of his father, George III, on 29 January 1820 until his own death ten years later...
, who held the style HRH
Royal Highness
Royal Highness is a style ; plural Royal Highnesses...
The Prince Regent during the incapacity, by a stint of mental illness, of his father, George III
George III of the United Kingdom
George III was King of Great Britain and King of Ireland from 25 October 1760 until the union of these two countries on 1 January 1801, after which he was King of the United Kingdom of Great Britain and Ireland until his death...
(see Regent
Regent
A regent, from the Latin regens "one who reigns", is a person selected to act as head of state because the ruler is a minor, not present, or debilitated. Currently there are only two ruling Regencies in the world, sovereign Liechtenstein and the Malaysian constitutive state of Terengganu...
for other regents). Regent's Park
Regent's Park
Regent's Park is one of the Royal Parks of London. It is in the north-western part of central London, partly in the City of Westminster and partly in the London Borough of Camden...
and Regent Street
Regent Street
Regent Street is one of the major shopping streets in London's West End, well known to tourists and Londoners alike, and famous for its Christmas illuminations...
in London
London
London is the capital city of :England and the :United Kingdom, the largest metropolitan area in the United Kingdom, and the largest urban zone in the European Union by most measures. Located on the River Thames, London has been a major settlement for two millennia, its history going back to its...
are named after him.

This period is known as the British Regency, or just the Regency.

The title was conferred by the Regency Act
Regency Acts
The Regency Acts are Acts of the Parliament of the United Kingdom passed at various times, to provide a regent if the reigning monarch were to be incapacitated or a minor . Prior to 1937, Regency Acts were passed only when necessary to deal with a specific situation...
on February 5, 1811. Subject to certain limitations for a period, the Prince Regent was able to exercise the full powers of the King. The precedent of the Regency Crisis of 1788 (from which George III recovered before it was necessary to appoint a Regent) was followed. The Prince of Wales
Prince of Wales
Prince of Wales is a title traditionally granted to the heir apparent to the reigning monarch of the United Kingdom of Great Britain and Northern Ireland and the 15 other independent Commonwealth realms...
continued as regent until his father's death in 1820, when he became George IV.

At Luitpold's death in 1912, his son Prince Ludwig
Ludwig III of Bavaria
Ludwig III , was the last King of Bavaria, reigning from 1913 to 1918.-Early life:...
succeeded as Prince Regent. Ludwig held the title for less than a year, since the Bavarian Legislature decided to recognise him as king.

It has also been known throughout history that when a king is unable to reign or is out of the country for long periods of time, sometimes the consort will step up and will temporarily do the duties of a Prince regent. Sometimes they are unofficially known as regents themselves. In the Kingdom of Swaziland, queen mother
Queen mother
Queen Mother is a title or position reserved for a widowed queen consort whose son or daughter from that marriage is the reigning monarch. The term has been used in English since at least 1577...
s have temporarily stepped in when the sovereign was either a minor or unable to reign due to other reasons.

More prince-regents (often without such specific title) are to be found in Regent
Regent
A regent, from the Latin regens "one who reigns", is a person selected to act as head of state because the ruler is a minor, not present, or debilitated. Currently there are only two ruling Regencies in the world, sovereign Liechtenstein and the Malaysian constitutive state of Terengganu...
.