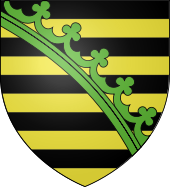 This article lists Dukes, Electors, and Kings ruling over different territories named Saxony from the beginning of the Saxon Duchy in the 9th century to the end of the Saxon Kingdom in 1918.

The original Duchy of Saxony comprised lands of the Saxon people in the north-western part of present-day Germany, namely, the contemporary German state of Lower Saxony
Lower Saxony
Lower Saxony is a German state situated in north-western Germany and is second in area and fourth in population among the sixteen states of Germany...
as well as Westphalia
Westphalia
Westphalia is a region in Germany, centred on the cities of Arnsberg, Bielefeld, Dortmund, Minden and Münster.Westphalia is roughly the region between the rivers Rhine and Weser, located north and south of the Ruhr River. No exact definition of borders can be given, because the name "Westphalia"...
and Western Saxony-Anhalt
Saxony-Anhalt
Saxony-Anhalt is a landlocked state of Germany. Its capital is Magdeburg and it is surrounded by the German states of Lower Saxony, Brandenburg, Saxony, and Thuringia.Saxony-Anhalt covers an area of...
, not corresponding to the modern German state of Saxony
Saxony
The Free State of Saxony is a landlocked state of Germany, contingent with Brandenburg, Saxony Anhalt, Thuringia, Bavaria, the Czech Republic and Poland. It is the tenth-largest German state in area, with of Germany's sixteen states....
.


Ottonian
Ottonian
The Ottonian dynasty was a dynasty of Germanic Kings , named after its first emperor but also known as the Saxon dynasty after the family's origin. The family itself is also sometimes known as the Liudolfings, after its earliest known member Liudolf and one of its primary leading-names...
Dynasty


Billung
Billung
The House of Billung was a dynasty of Saxon noblemen in the 9th through 12th centuries.The first known member of the house was Count Wichmann, mentioned as a Billung in 811...
Dynasty


Ascanian
Ascanian
The House of Ascania was a dynasty of German rulers. It was also known as the House of Anhalt, after Anhalt, its longest-held possession.The Ascanians are named after Ascania Castle, which is located near and named after Aschersleben...
Dynasty

With the final removal of the Welfs in 1180, the Duchy of Saxony was sharply reduced in territory. Westphalia fell to the Archbishop of Cologne, while the Duchies of Brunswick and Lüneburg
Lüneburg
Lüneburg is a town in the German state of Lower Saxony. It is located about southeast of fellow Hanseatic city Hamburg. It is part of the Hamburg Metropolitan Region, and one of Hamburg's inner suburbs...
remained with the Welfs. The Ascanian
Ascanian
The House of Ascania was a dynasty of German rulers. It was also known as the House of Anhalt, after Anhalt, its longest-held possession.The Ascanians are named after Ascania Castle, which is located near and named after Aschersleben...
Dukes had their base further east, near the Elbe
Elbe
The Elbe is one of the major rivers of Central Europe. It rises in the Krkonoše Mountains of the northwestern Czech Republic before traversing much of Bohemia , then Germany and flowing into the North Sea at Cuxhaven, 110 km northwest of Hamburg...
, resulting in the name Saxony moving towards the east. The post carve-up Saxony is therefore sometimes called the younger Duchy of Saxony. Also the counting of its dukes is discontinued. While the first post carve-up duke is competingly counted as Bernard III—because of two predecessors of the same name before 1180—or as Bernard I with his great-great-great-great grandson Bernard II
Bernard II, Duke of Saxe-Lauenburg
Bernard II of Saxe-Lauenburg was a son of Duke Eric IV of Saxe-Lauenburg and Sophia of Brunswick and Lunenburg , daughter of Duke Magnus II of Brunswick and Lunenburg ....
being counted second. The second post carve-up duke Albert I
Albert I, Duke of Saxony
Albert I was a Duke of Saxony, Angria, and Westphalia; Lord of Nordalbingia; Count of Anhalt; and Prince-elector and Archmarshal of the Holy Roman Empire...
is already usually counted as the first, although before 1180 he had one predecessor of the same name, being even his grandfather Albert the Bear.


Ascanian or younger Duchy of Saxony

) and introduced their Ascanian family colours and emblem added by a bendwise crancelin, symbolising the Saxon ducal crown, as new coat-of-arms of Saxony (

). The later rulers of the House of Wettin adopted the Ascanian coat-of-arms.


In 1303 the brothers split their inheritance between them, however, only two brothers had heirs creating the Bergedorf-Mölln and the Ratzeburg-Lauenburg lines.

First named Saxe-Mölln, however, renamed following a territorial redeployment including parts of Albert III's share in 1321.


In 1401, the elder branch became extinct and Lauenburg rejoined the Ratzeburg-Lauenburg line.


In 1401, the younger branch inherited Lauenburg and other possessions of the extinct elder Bergedorf-Mölln line.


The Ascanian Dynasty continued in Saxe-Lauenburg until 1689, but after the Lauenburgish line had finally lost the Saxon Electorate to the Wittenberg line in 1356 and failed to obtain the succession in the Electorate after 1422, recognition of the Dukes of Saxe-Lauenburg as Dukes of Saxony waned.

For the predecessor see the section Ascanian or younger Duchy of Saxony above in this article.

The Albertines were a junior branch of the Wettin dynasty of Electors of Saxony (section below), who ruled in Northern Thuringia and Southern Meissen until they replaced the senior "Ernestine" branch as Electors and rulers of most Saxon territory in 1547.

Following their displacement by the Albertines, the Ernestine branch of the Wettins continued to rule in southern Thuringia as "Dukes of Saxony", but their lands eventually split up into many different tiny "Ernestine duchies". Of these, Saxe-Weimar-Eisenach
Saxe-Weimar-Eisenach
The Duchy of Saxe-Weimar-Eisenach was created in 1809 by the merger of the Ernestine duchies of Saxe-Weimar and Saxe-Eisenach. It was raised to a Grand duchy in 1815 by resolution of the Vienna Congress. In 1877, it officially changed its name to the Grand Duchy of Saxony , but this name was...
, Saxe-Coburg-Gotha, Saxe-Meiningen
Saxe-Meiningen
The Duchy of Saxe-Meiningen was one of the Saxon duchies held by the Ernestine line of the Wettin dynasty, located in the southwest of the present-day German state of Thuringia....
, and Saxe-Altenburg
Saxe-Altenburg
Saxe-Altenburg was one of the Saxon duchies held by the Ernestine branch of the Wettin dynasty in present-day Thuringia.-History:The duchy originated from the medieval Burgraviate of Altenburg in the Imperial Pleissnerland , a possession of the Wettin Margraves of Meissen since 1243...
lasted until 1918. This article does not list the subsequent Ernestine dukes.

Saxony became a republic with the demise of the German Empire
German Empire
The German Empire refers to Germany during the "Second Reich" period from the unification of Germany and proclamation of Wilhelm I as German Emperor on 18 January 1871, to 1918, when it became a federal republic after defeat in World War I and the abdication of the Emperor, Wilhelm II.The German...
in 1918. For later rulers, see List of Ministers-President of Saxony.