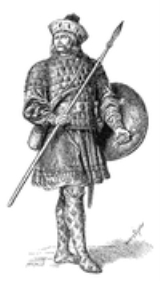 Encyclopedia
Poland
Poland
Poland , officially the Republic of Poland , is a country in Central Europe bordered by Germany to the west; the Czech Republic and Slovakia to the south; Ukraine, Belarus and Lithuania to the east; and the Baltic Sea and Kaliningrad Oblast, a Russian exclave, to the north...
, or at least its nucleus, was ruled at various times either by dukes (the 10th-14th century) or by kings (the 11th-18th century). The longest-reigning dynasties were the Piast
Piast dynasty
The Piast dynasty was the first historical ruling dynasty of Poland. It began with the semi-legendary Piast Kołodziej . The first historical ruler was Duke Mieszko I . The Piasts' royal rule in Poland ended in 1370 with the death of king Casimir the Great...
s (ca. 960 – 1370) and Jagiellon
Jagiellon dynasty
The Jagiellonian dynasty was a royal dynasty originating from the Lithuanian House of Gediminas dynasty that reigned in Central European countries between the 14th and 16th century...
s (1386–1572). Intervening and subsequent monarchs were often rulers of foreign countries or princes recruited from foreign dynasties.


Jagiellon Dynasty
Jagiellon dynasty
The Jagiellonian dynasty was a royal dynasty originating from the Lithuanian House of Gediminas dynasty that reigned in Central European countries between the 14th and 16th century...


Tsar
Tsar
Tsar is a title used to designate certain European Slavic monarchs or supreme rulers. As a system of government in the Tsardom of Russia and Russian Empire, it is known as Tsarist autocracy, or Tsarism...
s of the Tsardom of Poland


Dukes of Warsaw
Duchy of Warsaw
The Duchy of Warsaw was a Polish state established by Napoleon I in 1807 from the Polish lands ceded by the Kingdom of Prussia under the terms of the Treaties of Tilsit. The duchy was held in personal union by one of Napoleon's allies, King Frederick Augustus I of Saxony...
(Warszawa)