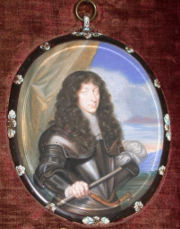 Armand de Bourbon, Prince de Conti (11 October 1629 – 26 February 1666) was a French nobleman, the second son of Henry II, Prince of Condé and brother of Louis II de Bourbon, Prince de Condé
Louis II de Bourbon, Prince de Condé
Louis de Bourbon, Prince of Condé was a French general and the most famous representative of the Condé branch of the House of Bourbon. Prior to his father's death in 1646, he was styled the Duc d'Enghien...
and Anne Genevieve, Duchess of Longueville. As a member of the reigning House of Bourbon
House of Bourbon
The House of Bourbon is a European royal house, a branch of the Capetian dynasty . Bourbon kings first ruled Navarre and France in the 16th century. By the 18th century, members of the Bourbon dynasty also held thrones in Spain, Naples, Sicily, and Parma...
, he was a Prince du Sang
Prince du Sang
A prince of the blood was a person who was legitimately descended in the male line from the monarch of a country. In France, the rank of prince du sang was the highest held at court after the immediate family of the king during the ancien régime and the Bourbon Restoration...
.

The title of Prince de Conti was revived in his favor in 1629. He was destined for the church and studied theology
Theology
Theology is the systematic and rational study of religion and its influences and of the nature of religious truths, or the learned profession acquired by completing specialized training in religious studies, usually at a university or school of divinity or seminary.-Definition:Augustine of Hippo...
at the university of Bourges
Bourges
Bourges is a city in central France on the Yèvre river. It is the capital of the department of Cher and also was the capital of the former province of Berry.-History:...
, but although he received several benefice
Benefice
A benefice is a reward received in exchange for services rendered and as a retainer for future services. The term is now almost obsolete.-Church of England:...
s he did not take orders
Holy Orders
The term Holy Orders is used by many Christian churches to refer to ordination or to those individuals ordained for a special role or ministry....
. He played a conspicuous part in the intrigues and fighting of the Fronde
Fronde
The Fronde was a civil war in France, occurring in the midst of the Franco-Spanish War, which had begun in 1635. The word fronde means sling, which Parisian mobs used to smash the windows of supporters of Cardinal Mazarin....
, became in 1648 commander-in-chief of the rebel army, and in 1650 was with his brother Condé imprisoned at Vincennes
Vincennes
Vincennes is a commune in the Val-de-Marne department in the eastern suburbs of Paris, France. It is located from the centre of Paris. It is one of the most densely populated municipalities in Europe.-History:...
.

Very mystic and full of strange ideas, he turned slightly mad while in prison. Having a secret passion for his sister the Duchess of Longueville, he invented tricks to make her notice him. He tried alchemy
Alchemy
Alchemy is an influential philosophical tradition whose early practitioners’ claims to profound powers were known from antiquity. The defining objectives of alchemy are varied; these include the creation of the fabled philosopher's stone possessing powers including the capability of turning base...
and potions for some time and eventually bruised himself with a spatula. This episode was finally fortunate for him because he could not be refused external help from physicians anymore. Some of them would pass letters and pleas to the outside world which speeded up his eventual release.

Released when Mazarin went into exile, he wished to marry 'Charlotte-Marie de Lorraine (1627–1652), the second daughter of the Duchesse de Chevreuse
Marie de Rohan-Montbazon, duchesse de Chevreuse
Marie de Rohan was a French aristocrat, famed for being the center of many of the intrigues of the first half of the 17th century in France...
, the confidante of the queen, Anne of Austria
Anne of Austria
Anne of Austria was Queen consort of France and Navarre, regent for her son, Louis XIV of France, and a Spanish Infanta by birth...
, but was prevented by his brother, who was now supreme in the state. He was concerned in the Fronde
Fronde
The Fronde was a civil war in France, occurring in the midst of the Franco-Spanish War, which had begun in 1635. The word fronde means sling, which Parisian mobs used to smash the windows of supporters of Cardinal Mazarin....
of 1651, but soon afterwards became reconciled with Mazarin, and in 1654 married the cardinal's niece, Anne Marie Martinozzi
Anne Marie Martinozzi
Anne Marie Martinozzi, Princess of Conti was a niece of King Louis XIV of France's chief minister Cardinal Mazarin, and the wife of Armand de Bourbon, Prince of Conti. She became the mother of the libertine François Louis, Prince of Conti, le Grand Conti...
(1639–1672), and secured the government of Guienne.

He took command of the army which in 1654 invaded Catalonia
Catalonia
Catalonia is an autonomous community in northeastern Spain, with the official status of a "nationality" of Spain. Catalonia comprises four provinces: Barcelona, Girona, Lleida, and Tarragona. Its capital and largest city is Barcelona. Catalonia covers an area of 32,114 km² and has an...
, where he captured three towns from the Spaniards. He afterwards led the French forces in Italy
Italy
Italy , officially the Italian Republic languages]] under the European Charter for Regional or Minority Languages. In each of these, Italy's official name is as follows:;;;;;;;;), is a unitary parliamentary republic in South-Central Europe. To the north it borders France, Switzerland, Austria and...
, but after his defeat before Alessandria
Alessandria
-Monuments:* The Citadel * The church of Santa Maria di Castello * The church of Santa Maria del Carmine * Palazzo Ghilini * Università del Piemonte Orientale-Museums:* The Marengo Battle Museum...
in 1657 retired to Languedoc
Languedoc
Languedoc is a former province of France, now continued in the modern-day régions of Languedoc-Roussillon and Midi-Pyrénées in the south of France, and whose capital city was Toulouse, now in Midi-Pyrénées. It had an area of approximately 42,700 km² .-Geographical Extent:The traditional...
, where he devoted himself to study and mysticism
Mysticism
Mysticism is the knowledge of, and especially the personal experience of, states of consciousness, i.e. levels of being, beyond normal human perception, including experience and even communion with a supreme being.-Classical origins:...
until his death.

At Clermont, Conti had been a fellow student of Molière
Molière
Jean-Baptiste Poquelin, known by his stage name Molière, was a French playwright and actor who is considered to be one of the greatest masters of comedy in Western literature...
's for whom he secured an introduction to the court of Louis XIV
Louis XIV of France
Louis XIV , known as Louis the Great or the Sun King , was a Bourbon monarch who ruled as King of France and Navarre. His reign, from 1643 to his death in 1715, began at the age of four and lasted seventy-two years, three months, and eighteen days...
, but afterwards, when writing a treatise against the stage entitled Traité de la comédie et des spectacles selon les traditions de l'Église (Paris, 1667), he charged the dramatist with keeping a school of atheism
Atheism
Atheism is, in a broad sense, the rejection of belief in the existence of deities. In a narrower sense, atheism is specifically the position that there are no deities...
. Conti also wrote Lettres sur la grâce, and Du devoir des grands et des devoirs des gouverneurs de province.