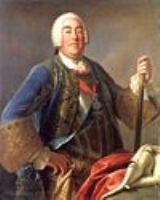 Augustus was the only legitimate son of Augustus II the Strong
Augustus II the Strong
Frederick Augustus I or Augustus II the Strong was Elector of Saxony and King of Poland and Grand Duke of Lithuania ....
, Imperial Prince-Elector
Prince-elector
The Prince-electors of the Holy Roman Empire were the members of the electoral college of the Holy Roman Empire, having the function of electing the Roman king or, from the middle of the 16th century onwards, directly the Holy Roman Emperor.The heir-apparent to a prince-elector was known as an...
of Saxony and monarch of the Polish–Lithuanian Commonwealth, by his wife, Christiane Eberhardine of Brandenburg-Bayreuth
Christiane Eberhardine of Brandenburg-Bayreuth
Christiane Eberhardine of Brandenburg-Bayreuth was Electress of Saxony from 1694 to 1727 and titular Queen of the Polish–Lithuanian Commonwealth from 1697 to 1727 as the wife of Augustus II the Strong. Not once throughout the whole of her thirty-year queenship did she set foot in Poland, instead...
. He was groomed to succeed his father as King of Poland and Grand Duke of Lithuania, and thus, in 1712, converted to Catholicism
Catholicism
Catholicism is a broad term for the body of the Catholic faith, its theologies and doctrines, its liturgical, ethical, spiritual, and behavioral characteristics, as well as a religious people as a whole....
. This was publicly announced in 1717, to furor among the nobility in his native Saxony
Saxony
The Free State of Saxony is a landlocked state of Germany, contingent with Brandenburg, Saxony Anhalt, Thuringia, Bavaria, the Czech Republic and Poland. It is the tenth-largest German state in area, with of Germany's sixteen states....
. http://www.bonhams.com/cgi-bin/public.sh/WService=wslive_pub/pubweb/publicSite.r?sContinent=EUR&MJ=3ea1957089632c0194d57e4b22fdc308,3ea1957089632c0194d57e4b22fdc308&screen=lotdetailsNoFlash&iSaleItemNo=4367375&iSaleNo=18003&iSaleSectionNo=1

After his father's death, he inherited Saxony and was elected King of Poland, with the support of Russian
Russian Empire
The Russian Empire was a state that existed from 1721 until the Russian Revolution of 1917. It was the successor to the Tsardom of Russia and the predecessor of the Soviet Union...
and Austria
Austria
Austria , officially the Republic of Austria , is a landlocked country of roughly 8.4 million people in Central Europe. It is bordered by the Czech Republic and Germany to the north, Slovakia and Hungary to the east, Slovenia and Italy to the south, and Switzerland and Liechtenstein to the...
n military forces in the War of the Polish Succession
War of the Polish Succession
The War of the Polish Succession was a major European war for princes' possessions sparked by a Polish civil war over the succession to Augustus II, King of Poland that other European powers widened in pursuit of their own national interests...
(1733–1738). As King, Augustus III was uninterested in the affairs of his Polish–Lithuanian dominion, focusing on interests like hunting, opera and collecting paintings (see Gemäldegalerie Alte Meister
Gemäldegalerie Alte Meister
The Gemäldegalerie Alte Meister in Dresden features major works of art. It is located in the gallery wing of the Zwinger....
). During his 30-year reign, he spent less than a total of three years in Poland, where the struggle between the House of Czartoryski and the Potocki paralysed the Sejm (Liberum Veto
Liberum veto
The liberum veto was a parliamentary device in the Polish-Lithuanian Commonwealth. It allowed any member of the Sejm to force an immediate end to the current session and nullify any legislation that had already been passed at the session by shouting Nie pozwalam! .From the mid-16th to the late 18th...
), fostering internal political anarchy and further weakening the Polish–Lithuanian Commonwealth. Augustus III delegated most of his powers and responsibilities to Heinrich von Brühl
Heinrich von Brühl
Heinrich, count von Brühl , was a German statesman at the court of Saxony and the Polish–Lithuanian Commonwealth...
, who became quasi-dictator
Dictator
A dictator is a ruler who assumes sole and absolute power but without hereditary ascension such as an absolute monarch. When other states call the head of state of a particular state a dictator, that state is called a dictatorship...
of Poland.

The thirty years of Augustus III's reign saw the Seven Years' War
Seven Years' War
The Seven Years' War was a global military war between 1756 and 1763, involving most of the great powers of the time and affecting Europe, North America, Central America, the West African coast, India, and the Philippines...
(1754 and 1756–1763) among them. In 1733, the Saxon composer Johann Sebastian Bach
Johann Sebastian Bach
Johann Sebastian Bach was a German composer, organist, harpsichordist, violist, and violinist whose sacred and secular works for choir, orchestra, and solo instruments drew together the strands of the Baroque period and brought it to its ultimate maturity...
dedicated the Kyrie and Gloria (of what would later become his Mass in B Minor) to Augustus in honor of his succession to the Saxon electorate.