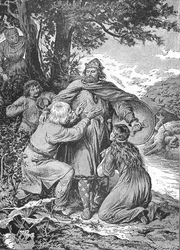 Krakus, Krak or Grakch was a legendary Polish
Poland
Poland , officially the Republic of Poland , is a country in Central Europe bordered by Germany to the west; the Czech Republic and Slovakia to the south; Ukraine, Belarus and Lithuania to the east; and the Baltic Sea and Kaliningrad Oblast, a Russian exclave, to the north...
prince and founder of Kraków
Kraków
Kraków also Krakow, or Cracow , is the second largest and one of the oldest cities in Poland. Situated on the Vistula River in the Lesser Poland region, the city dates back to the 7th century. Kraków has traditionally been one of the leading centres of Polish academic, cultural, and artistic life...
, the ruler of the tribe of Lechitians
Lechites
Lechites – an ethnic and linguistic group of West Slavs, the ancestors of modern Poles and the historical Pomeranians and Polabians.-History:...
(Poles
Poles
thumb|right|180px|The state flag of [[Poland]] as used by Polish government and diplomatic authoritiesThe Polish people, or Poles , are a nation indigenous to Poland. They are united by the Polish language, which belongs to the historical Lechitic subgroup of West Slavic languages of Central Europe...
). Krakus is also credited with building Wawel Castle
Wawel Castle
The Gothic Wawel Castle in Kraków in Poland was built at the behest of Casimir III the Great and consists of a number of structures situated around the central courtyard. In the 14th century it was rebuilt by Jogaila and Jadwiga of Poland. Their reign saw the addition of the tower called the Hen's...
. The first recorded mention of Krakus, then spelled Grakch, is in the Chronica seu originale regum et principum Poloniae
Chronica seu originale regum et principum Poloniae
Chronica seu originale regum et principum Poloniae is a Latin history of Poland written by Wincenty Kadłubek between 1190 and 1208 CE. The work was probably commissioned by Casimir II of Poland...
from 1190. He is also said to have defeated armies of the Roman Empire
Roman Empire
The Roman Empire was the post-Republican period of the ancient Roman civilization, characterised by an autocratic form of government and large territorial holdings in Europe and around the Mediterranean....
, which were attacking from the south.

Historian J. Banaszkiewicz attributes Krak's name to a pre-Slavic word "krakula", meaning judge's staff. The same word-root is believed to have been used in Czech and Russian naming conventions.

However, historians Cetwiński and Derwich suggest a different etymology
Etymology
Etymology is the study of the history of words, their origins, and how their form and meaning have changed over time.For languages with a long written history, etymologists make use of texts in these languages and texts about the languages to gather knowledge about how words were used during...
, which seems more probable to some, with Krak, meaning simply an oak, a sacred tree, most often associated with the concept of genealogy
Genealogy
Genealogy is the study of families and the tracing of their lineages and history. Genealogists use oral traditions, historical records, genetic analysis, and other records to obtain information about a family and to demonstrate kinship and pedigrees of its members...
.

Krakus Mound
Krakus Mound
Krakus Mound is a tumulus located in the Podgórze district of Kraków, Poland; assumed to be the resting place of the legendary prince Krakus. It is located on Lasota Hill, approximately south of the city centre, at an altitude of , with the base diameter of and the height of .The age and the...
, which exists to this day, was previously believed to contain Krakus' remains. It has been the subject of thorough archeological research from 1934-38, however, no grave has ever been found in it. The mound has a diameter of over 50 meters. According to research, it was erected between the 8th and 10th centuries as a central element of an ancient grave site, which does not exist today.

Both, Wincenty Kadlubek
Wincenty Kadlubek
Blessed Wincenty Kadłubek , also known as Vincent Kadlubek, Vincent Kadlubo, Vincent Kadlubko, Vincent of Kraków, Master Vincentius, was a thirteenth century Bishop of Cracow and historian of Poland.-Biography:...
with the Krak and Princess Wanda
Princess Wanda
Princess Wanda was the legendary daughter of Krakus, legendary founder of Kraków. Upon her father's death, she became queen of the Poles, but committed suicide to avoid an unwanted marriage....
legend and Cosmas of Prague
Cosmas of Prague
Cosmas of Prague was a Bohemian priest, writer and historian born in a noble family in Bohemia. Between 1075 and 1081, he studied in Liège. After his return to Bohemia, he became a priest and married Božetěcha, with whom he probably had a son. In 1086 Cosmas was appointed prebendary of Prague, a...
with the Krok and Libussa legend wrote them as beginning histories of Poles and Czech.