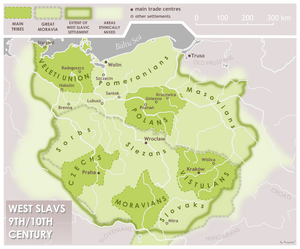 The Polans were a West Slavic
West Slavs
The West Slavs are Slavic peoples speaking West Slavic languages. They include Poles , Czechs, Slovaks, Lusatian Sorbs and the historical Polabians. The northern or Lechitic group includes, along with Polish, the extinct Polabian and Pomeranian languages...
tribe, part of the Lechitic
Lechitic languages
The Lechitic languages include three languages spoken in Central Europe, mainly in Poland, and historically also in the eastern and northern parts of modern Germany. This language group is a branch of the larger West Slavic language family...
group, inhabiting the Warta river basin of the historic Greater Poland
Greater Poland
Greater Poland or Great Poland, often known by its Polish name Wielkopolska is a historical region of west-central Poland. Its chief city is Poznań.The boundaries of Greater Poland have varied somewhat throughout history...
region in the 8th century.

During the reign of King Svatopluk I
Svatopluk I
Svatopluk I or Zwentibald I was the greatest ruler of Moravia that attained its maximum territorial expansion in his reign . His career had already started in the 860s, when he governed a principality, the location of which is still a matter of debate among historians, within Moravia under the...
of Great Moravia
Great Moravia
Great Moravia was a Slavic state that existed in Central Europe and lasted for nearly seventy years in the 9th century whose creators were the ancestors of the Czechs and Slovaks. It was a vassal state of the Germanic Frankish kingdom and paid an annual tribute to it. There is some controversy as...
(871–94), who subdued the tribes of the Vistulans
Vistulans
Vistulans were an early medieval West Slavic tribe inhabiting the land of modern Lesser Poland.From the 1st century and possibly earlier, the Vistulans , were part of the Carpian Tribe, which got its name from the area that they lived in, which was beside the Carpathian Mountain Range...
and Ślężanie
Slezanie
Ślężanie were a tribe of West Slavs, specifically of the Lechitic , inhabiting territories of Lower Silesia, near Ślęża mountain and Ślęza river, on the both banks of the Oder, up to the area of modern city of Wrocław...
(Silesians), the people settling the adjacent territories in the north united under the Polans, which however were not mentioned by the Bavarian Geographer
Bavarian Geographer
The Bavarian Geographer is a conventional name given by Jan Potocki in 1796 to the author of an anonymous medieval document Descriptio civitatum et regionum ad septentrionalem plagam Danubii ....
. Following the decline of the Greater Moravian realm, they were able to gradually gain control over large territories between the Oder
Oder
The Oder is a river in Central Europe. It rises in the Czech Republic and flows through western Poland, later forming of the border between Poland and Germany, part of the Oder-Neisse line...
(Odra) and Bug River
Bug River
The Bug River is a left tributary of the Narew river flows from central Ukraine to the west, passing along the Ukraine-Polish and Polish-Belarusian border and into Poland, where it empties into the Narew river near Serock. The part between the lake and the Vistula River is sometimes referred to as...
rivers and between the Carpathian Mountains
Carpathian Mountains
The Carpathian Mountains or Carpathians are a range of mountains forming an arc roughly long across Central and Eastern Europe, making them the second-longest mountain range in Europe...
and the Baltic Sea
Baltic Sea
The Baltic Sea is a brackish mediterranean sea located in Northern Europe, from 53°N to 66°N latitude and from 20°E to 26°E longitude. It is bounded by the Scandinavian Peninsula, the mainland of Europe, and the Danish islands. It drains into the Kattegat by way of the Øresund, the Great Belt and...
. By the late 10th century they had integrated the Kuyavia
Kuyavia
Kujawy , is a historical and ethnographic region in the north-central Poland, situated in the basin of the middle Vistula and upper Noteć Rivers, with its capital in Włocławek.-Etymology:The origin of the name Kujawy was seen differently in history...
n lands of the Goplans
Goplans
Goplans, Goplanes or Goplanie is a name of an early medieval West Slavic tribe, later to become part of the Polish nation. They were mentioned by Bavarian Geographer as 'Glopeani' and believed to have lived around Lake Gopło, with its capital in Kruszwica, between 7th-9th century AD.Medieval...
.

The tribal union led by the Piast dynasty
Piast dynasty
The Piast dynasty was the first historical ruling dynasty of Poland. It began with the semi-legendary Piast Kołodziej . The first historical ruler was Duke Mieszko I . The Piasts' royal rule in Poland ended in 1370 with the death of king Casimir the Great...
developed into the Kingdom of Poland, whose name derives from that of the Polans. The first documented leader was Mieszko I
Mieszko I of Poland
Mieszko I , was a Duke of the Polans from about 960 until his death. A member of the Piast dynasty, he was son of Siemomysł; grandchild of Lestek; father of Bolesław I the Brave, the first crowned King of Poland; likely father of Świętosława , a Nordic Queen; and grandfather of her son, Cnut the...
(960–92), who significantly enlarged the Polish territory of his Civitas Schinesghe
Civitas Schinesghe
Civitas Schinesghe is the first officially written down name of Poland originating from 991–992. The original deed is missing, but mentioned in an 11th-century papal regesta called Dagome iudex, according to which the Piast duke Mieszko I of Poland had given the guidance of unam civitatem in...
by incorporating Masovia and conquering Silesia
Silesia
Silesia is a historical region of Central Europe located mostly in Poland, with smaller parts also in the Czech Republic, and Germany.Silesia is rich in mineral and natural resources, and includes several important industrial areas. Silesia's largest city and historical capital is Wrocław...
and the Vistulan lands of Lesser Poland
Lesser Poland
Lesser Poland is one of the historical regions of Poland, with its capital in the city of Kraków. It forms the southeastern corner of the country, and should not be confused with the modern Lesser Poland Voivodeship, which covers only a small, southern part of Lesser Poland...
. For more information, see Prehistory of Poland and History of Poland during the Piast dynasty.

The Western Polans are not to be confused with Eastern Polans
Polans (eastern)
The Polans ; also Polianians; were a Slavic tribe between the 6th and the 9th century, which inhabited both sides of the Dnieper river from Liubech to Rodnia and also down the lower streams of the rivers Ros', Sula, Stuhna, Teteriv, Irpin', Desna and Pripyat...
, a similarly named Slavic tribe. The latter lived near modern-day Kiev
Kiev
Kiev or Kyiv is the capital and the largest city of Ukraine, located in the north central part of the country on the Dnieper River. The population as of the 2001 census was 2,611,300. However, higher numbers have been cited in the press....
and played a key role in the creation of Rus
Rus
Ruś may refer to the following places:*Ruś, Podlaskie Voivodeship, a village in Łomża County, north-eastern Poland*Ruś, Olsztyn County, a village in Warmian-Masurian Voivodeship, northern Poland...
.