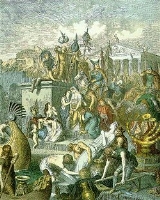 Overview
The Vandals were an East Germanic tribe that entered the late Roman Empire
Roman Empire
The Roman Empire was the post-Republican period of the ancient Roman civilization, characterised by an autocratic form of government and large territorial holdings in Europe and around the Mediterranean....
during the 5th century. The Vandals under king Genseric
Genseric
Genseric , also spelled as Geiseric or Gaiseric, was King of the Vandals and Alans and was one of the key players in the troubles of the Western Roman Empire in the 5th century...
entered Africa in 429 and by 439 established a kingdom which included the Roman Africa province
Africa Province
The Roman province of Africa was established after the Romans defeated Carthage in the Third Punic War. It roughly comprised the territory of present-day northern Tunisia, and the small Mediterranean coast of modern-day western Libya along the Syrtis Minor...
, besides the islands of Sicily
Sicily
Sicily is a region of Italy, and is the largest island in the Mediterranean Sea. Along with the surrounding minor islands, it constitutes an autonomous region of Italy, the Regione Autonoma Siciliana Sicily has a rich and unique culture, especially with regard to the arts, music, literature,...
, Corsica
Corsica
Corsica is an island in the Mediterranean Sea. It is located west of Italy, southeast of the French mainland, and north of the island of Sardinia....
, Sardinia
Sardinia
Sardinia is the second-largest island in the Mediterranean Sea . It is an autonomous region of Italy, and the nearest land masses are the French island of Corsica, the Italian Peninsula, Sicily, Tunisia and the Spanish Balearic Islands.The name Sardinia is from the pre-Roman noun *sard[],...
and the Balearics. In 455, they sacked the city of Rome
Sack of Rome (455)
The sack of 455 was the second of three barbarian sacks of Rome; it was executed by the Vandals, who were then at war with the usurping Western Roman Emperor Petronius Maximus....
. Their kingdom collapsed in the Vandalic War
Vandalic War
The Vandalic War was a war fought in North Africa, in the areas of modern Tunisia and eastern Algeria, in 533-534, between the forces of the Eastern Roman Empire and the Vandal Kingdom of Carthage...
of 533–4, in which Justinian I
Justinian I
Justinian I ; , ; 483– 13 or 14 November 565), commonly known as Justinian the Great, was Byzantine Emperor from 527 to 565. During his reign, Justinian sought to revive the Empire's greatness and reconquer the lost western half of the classical Roman Empire.One of the most important figures of...
managed to reconquer the Africa province for the Eastern Roman (Byzantine) Empire.

The Goth
Goths
The Goths were an East Germanic tribe of Scandinavian origin whose two branches, the Visigoths and the Ostrogoths, played an important role in the fall of the Roman Empire and the emergence of Medieval Europe....
leader Theodoric the Great
Theodoric the Great
Theodoric the Great was king of the Ostrogoths , ruler of Italy , regent of the Visigoths , and a viceroy of the Eastern Roman Empire...
, king of the Ostrogoths and regent of the Visigoths, was allied by marriage with the Vandals as well as with the Burgundians
Burgundians
The Burgundians were an East Germanic tribe which may have emigrated from mainland Scandinavia to the island of Bornholm, whose old form in Old Norse still was Burgundarholmr , and from there to mainland Europe...
and the Franks
Franks
The Franks were a confederation of Germanic tribes first attested in the third century AD as living north and east of the Lower Rhine River. From the third to fifth centuries some Franks raided Roman territory while other Franks joined the Roman troops in Gaul. Only the Salian Franks formed a...
under Clovis I
Clovis I
Clovis Leuthwig was the first King of the Franks to unite all the Frankish tribes under one ruler, changing the leadership from a group of royal chieftains, to rule by kings, ensuring that the kingship was held by his heirs. He was also the first Catholic King to rule over Gaul . He was the son...
.

The reputation of the Vandals among Renaissance and Early Modern writers was that of the barbarian people which sacked and looted Rome.

What was the vandals role in the decline of rome?
More

406    Vandals, Alans and Suebians cross the Rhine, beginning an invasion of Gaul.

409    Vandals and Alans cross the Pyrenees and appear in Hispania.

455    Sack of Rome: The Vandals enter Rome, and plunder the city for two weeks