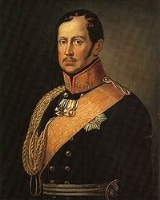 Encyclopedia
Frederick William III (3 August 1770 – 7 June 1840) was king of Prussia
Kingdom of Prussia
The Kingdom of Prussia was a German kingdom from 1701 to 1918. Until the defeat of Germany in World War I, it comprised almost two-thirds of the area of the German Empire...
from 1797 to 1840. He was in personal union
Personal union
A personal union is the combination by which two or more different states have the same monarch while their boundaries, their laws and their interests remain distinct. It should not be confused with a federation which is internationally considered a single state...
the sovereign prince of the Principality of Neuchâtel (1797–1806 and again 1813–1840).

Frederick William was born in Potsdam
Potsdam
Potsdam is the capital city of the German federal state of Brandenburg and part of the Berlin/Brandenburg Metropolitan Region. It is situated on the River Havel, southwest of Berlin city centre....
in 1770 as the son of Friedrich Wilhelm II of Prussia
Frederick William II of Prussia
Frederick William II was the King of Prussia, reigning from 1786 until his death. He was in personal union the Prince-Elector of Brandenburg and the sovereign prince of the Principality of Neuchâtel.-Early life:...
and Frederika Louisa of Hesse-Darmstadt
Frederika Louisa of Hesse-Darmstadt
Frederika of Hesse-Darmstadt was Queen consort of the Kingdom of Prussia as the second wife of Frederick William II of Prussia.-Background:...
. He was considered to be a shy and reserved boy, which became noticeable in his particularly reticent conversations distinguished by the lack of personal pronouns. This, however, was considered to be ideal for military leaders.

As a child, Frederick William's father (under the influence of his mistress, Wilhelmine Enke, Countess of Lichtenau) had Frederick William handed over to tutors, as was quite normal for the period. He spent part of the time living at Paretz, the estate of the old soldier Count Hans von Blumenthal
Von Blumenthal
The von Blumenthal family are German nobility from Brandenburg-Prussia. Other, unrelated, families of this name exist in Switzerland and formerly in Russia, and many unrelated families called "Blumenthal" without "von" are to be found worldwide.The family was already noble from earliest times ,...
who was the governor of his brother Prince Heinrich. They thus grew up partly with the Count's son, who accompanied them on their Grand Tour in the 1780s. Frederick William was happy at Paretz, and for this reason in 1795 he bought it from his boyhood friend and turned it into an important royal country retreat. He was a melancholy boy, but he grew up pious and honest. His tutors included the dramatist Johan Engel.

As a soldier
Soldier
A soldier is a member of the land component of national armed forces; whereas a soldier hired for service in a foreign army would be termed a mercenary...
he received the usual training of a Prussian prince, obtained his lieutenancy
Lieutenant
A lieutenant is a junior commissioned officer in many nations' armed forces. Typically, the rank of lieutenant in naval usage, while still a junior officer rank, is senior to the army rank...
in 1784, became a colonel
Colonel
Colonel , abbreviated Col or COL, is a military rank of a senior commissioned officer. It or a corresponding rank exists in most armies and in many air forces; the naval equivalent rank is generally "Captain". It is also used in some police forces and other paramilitary rank structures...
in 1790, and took part in the campaigns against France
France
The French Republic , The French Republic , The French Republic , (commonly known as France , is a unitary semi-presidential republic in Western Europe with several overseas territories and islands located on other continents and in the Indian, Pacific, and Atlantic oceans. Metropolitan France...
of 1792-1794. On December 24, 1793, Frederick William married Louise of Mecklenburg-Strelitz
Louise of Mecklenburg-Strelitz
Duchess Louise of Mecklenburg-Strelitz was Queen consort of Prussia as the wife of King Frederick William III...
, who bore him ten children. In the Kronprinzenpalais
Unter den Linden
Unter den Linden is a boulevard in the Mitte district of Berlin, the capital of Germany. It is named for its linden trees that line the grassed pedestrian mall between two carriageways....
(Crown Prince's palace) in Berlin
Berlin
Berlin is the capital city of Germany and is one of the 16 states of Germany. With a population of 3.45 million people, Berlin is Germany's largest city. It is the second most populous city proper and the seventh most populous urban area in the European Union...
, Frederick William lived a civil life with a problem-free marriage, which did not change even when he became King of Prussia
King of Prussia
King of Prussia may refer to:* A ruler of the former German state of Prussia**List of rulers of Prussia* Place names** King of Prussia, Pennsylvania* Shopping Centers** King of Prussia Mall...
in 1797.

Frederick William succeeded to the throne on 16 November 1797 and at once gave earnest of his good intentions by cutting down the expenses of the royal establishment, dismissing his father's ministers, and reforming the most oppressive abuses of the late reign. Unfortunately, however, he had all the Hohenzollern determination to retain personal power without the Hohenzollern genius for using it. Too distrustful to delegate responsibility to his ministers, he was too infirm of will to strike out and follow a consistent course for himself.

Disgusted with the moral debauchery of his father's court (in both political intrigues and sexual affairs), Frederick William's first endeavor was to restore morality to his dynasty. The eagerness to restore dignity to his family went so far that it nearly caused sculptor Johann Gottfried Schadow
Johann Gottfried Schadow
Johann Gottfried Schadow was a German sculptor.-Biography:Schadow was born in Berlin, where his father was a poor tailor....
to cancel his Prinzessinnengruppe project, which was commissioned by the previous monarch Friedrich Wilhelm II of Prussia
Frederick William II of Prussia
Frederick William II was the King of Prussia, reigning from 1786 until his death. He was in personal union the Prince-Elector of Brandenburg and the sovereign prince of the Principality of Neuchâtel.-Early life:...
. He was quoted as saying the following, which demonstrated his sense of duty and peculiar manner of speech:
At first Frederick William and his advisors attempted to pursue a policy of neutrality in the Napoleonic Wars
Napoleonic Wars
The Napoleonic Wars were a series of wars declared against Napoleon's French Empire by opposing coalitions that ran from 1803 to 1815. As a continuation of the wars sparked by the French Revolution of 1789, they revolutionised European armies and played out on an unprecedented scale, mainly due to...
. Although they succeeded in keeping out of the Third Coalition
Third Coalition
The War of the Third Coalition was a conflict which spanned from 1803 to 1806. It saw the defeat of an alliance of Austria, Portugal, Russia, and others by France and its client states under Napoleon I...
in 1805, eventually Frederick William was swayed by the belligerent attitude of the queen, who led Prussia's pro-war party, and entered into war in October 1806. On 14 October 1806, at the Battle of Jena-Auerstädt, the French defeated the Prussian army led by Frederick William, and the Prussian army collapsed. The royal family fled to Memel
Klaipeda
Klaipėda is a city in Lithuania situated at the mouth of the Nemunas River where it flows into the Baltic Sea. It is the third largest city in Lithuania and the capital of Klaipėda County....
, East Prussia
East Prussia
East Prussia is the main part of the region of Prussia along the southeastern Baltic Coast from the 13th century to the end of World War II in May 1945. From 1772–1829 and 1878–1945, the Province of East Prussia was part of the German state of Prussia. The capital city was Königsberg.East Prussia...
, where they fell on the mercy of Emperor Alexander I of Russia
Alexander I of Russia
Alexander I of Russia , served as Emperor of Russia from 23 March 1801 to 1 December 1825 and the first Russian King of Poland from 1815 to 1825. He was also the first Russian Grand Duke of Finland and Lithuania....
(who, rumour has it, had fallen in love with Queen Louise).
Alexander, too, suffered defeat at the hands of the French, and at Tilsit
Sovetsk, Kaliningrad Oblast
Sovetsk , known by its historical German name of Tilsit in East Prussia before 1946, is a town in Kaliningrad Oblast, Russia, located on the south bank of the Neman River. Population: -History of Tilsit:...
on the Niemen France made peace with Russia and Prussia. Napoleon dealt with Prussia very harshly, despite the pregnant Queen's personal interview with the French emperor. Prussia lost many of its Polish territories, as well as all territory west of the Elbe, and had to finance a large indemnity and to pay for French troops to occupy key strong points within the Kingdom.

Although the ineffectual King himself seemed resigned to Prussia's fate, various reforming ministers, such as Baron vom Stein, Prince von Hardenberg
Karl August von Hardenberg
Karl August Fürst von Hardenberg was a Prussian statesman and Prime Minister of Prussia. While during his late career he acquiesced to reactionary policies, earlier in his career he implemented a variety of Liberal reforms...
, Scharnhorst, and Count Gneisenau
August von Gneisenau
August Wilhelm Antonius Graf Neidhardt von Gneisenau was a Prussian field marshal. He was a prominent figure in the reform of the Prussian military and the War of Liberation.-Early life:...
, set about reforming Prussia's administration and military, with the encouragement of the Queen (who died, greatly mourned, in 1810).

In 1813, following Napoleon's defeat in Russia
Russia
Russia or , officially known as both Russia and the Russian Federation , is a country in northern Eurasia. It is a federal semi-presidential republic, comprising 83 federal subjects...
, Frederick William turned against France and signed an alliance with Russia at
Kalisz
Treaty of Kalisz (1813)
The Treaty of Kalisz was signed in Kalisz on 28 February 1813, between Russia and Prussia against Napoleon I. The events that led to this alliance date back to 30 December 1812, at Tauroggen when Lieutenant-General Ludwig Yorck von Wartenburg, on behalf of his Prussian troops, and General Hans Karl...
, although he had to flee Berlin
Berlin
Berlin is the capital city of Germany and is one of the 16 states of Germany. With a population of 3.45 million people, Berlin is Germany's largest city. It is the second most populous city proper and the seventh most populous urban area in the European Union...
, still under French occupation. Prussian troops played a key part in the victories of the allies in 1813 and 1814, and the King himself travelled with the main army of Prince Schwarzenberg, along with Alexander of Russia and Francis of Austria.

At the Congress of Vienna
Congress of Vienna
The Congress of Vienna was a conference of ambassadors of European states chaired by Klemens Wenzel von Metternich, and held in Vienna from September, 1814 to June, 1815. The objective of the Congress was to settle the many issues arising from the French Revolutionary Wars, the Napoleonic Wars,...
, Frederick William's ministers succeeded in securing important territorial increases for Prussia, although they failed to obtain the annexation of all of Saxony
Saxony
The Free State of Saxony is a landlocked state of Germany, contingent with Brandenburg, Saxony Anhalt, Thuringia, Bavaria, the Czech Republic and Poland. It is the tenth-largest German state in area, with of Germany's sixteen states....
, as they had wished. Following the war, Frederick William turned towards political reaction, abandoning the promises he had made in 1813 to supply Prussia with a constitution. 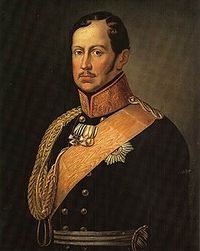 He died on 7 June 1840. His eldest son, Frederick William IV
Frederick William IV of Prussia
|align=right|Upon his accession, he toned down the reactionary policies enacted by his father, easing press censorship and promising to enact a constitution at some point, but he refused to enact a popular legislative assembly, preferring to work with the aristocracy through "united committees" of...
, succeeded him.