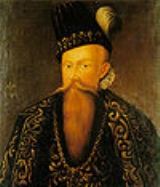 John cared for Karin and their children even after he married Catherine Jagellonica, in 1562. He got Karin a husband that would care for her and the children: in 1561, she married the nobleman Klas Andersson (Västgöte), a friend and servant of John. They had a daughter named Brita. He continued supporting Karin and his illegitimate children as a king, from 1568. In 1572 Karin married again, as her first husband was murdered by Erik XIV in 1563, to a Lars Henrikson, whom John ennobled in 1576 to care for his issue with Karin. The same year, he made his daughter Sofia a lady in the castle, as a servant to his sister Princess Elisabet
Princess Elizabeth of Sweden
Princess Elizabeth of Sweden, , was a Swedish princess and a duchess consort of Mecklenburg-Gadebusch...
. In 1580, John married her to Pontus de la Gardie. She later died giving birth to Jacob De la Gardie
Jacob De la Gardie
Field Marshal and Count Jacob Pontusson De la Gardie was a statesman and a soldier of the Swedish Empire....
.
The source of this article is wikipedia, the free encyclopedia.  The text of this article is licensed under the GFDL.