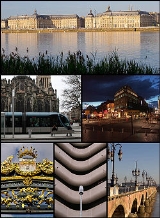 Overview
Bordeaux is a port city on the Garonne River
Garonne
The Garonne is a river in southwest France and northern Spain, with a length of .-Source:The Garonne's headwaters are to be found in the Aran Valley in the Pyrenees, though three different locations have been proposed as the true source: the Uelh deth Garona at Plan de Beret , the Ratera-Saboredo...
in the Gironde
Gironde
For the Revolutionary party, see Girondists.Gironde is a common name for the Gironde estuary, where the mouths of the Garonne and Dordogne rivers merge, and for a department in the Aquitaine region situated in southwest France.-History:...
department in southwestern France
France
The French Republic , The French Republic , The French Republic , (commonly known as France , is a unitary semi-presidential republic in Western Europe with several overseas territories and islands located on other continents and in the Indian, Pacific, and Atlantic oceans. Metropolitan France...
.

The Bordeaux-Arcachon
Arcachon
Arcachon is a commune in the Gironde department in southwestern France.It is a popular bathing location on the Atlantic coast southwest of Bordeaux in the Landes forest...
-Libourne
Libourne
Libourne is a commune in the Gironde department in Aquitaine in southwestern France. It is a sub-prefecture of the department.It is the wine-making capital of northern Gironde and lies near Saint-Émilion and Pomerol.-Geography:...
metropolitan area, has a population of 1,010,000 and constitutes the sixth-largest urban area in France. It is the capital of the Aquitaine
Aquitaine
Aquitaine , archaic Guyenne/Guienne , is one of the 27 regions of France, in the south-western part of metropolitan France, along the Atlantic Ocean and the Pyrenees mountain range on the border with Spain. It comprises the 5 departments of Dordogne, :Lot et Garonne, :Pyrénées-Atlantiques, Landes...
region
Régions of France
France is divided into 27 administrative regions , 22 of which are in Metropolitan France, and five of which are overseas. Corsica is a territorial collectivity , but is considered a region in mainstream usage, and is even shown as such on the INSEE website...
, as well as the prefecture of the Gironde department. Its inhabitants are called Bordelais.

What is responsible of commune?
More
x