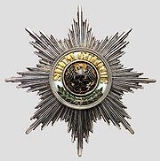 Encyclopedia
The Order of the Black Eagle was the highest order of chivalry
Order (decoration)
An order or order of merit is a visible honour, awarded by a government, dynastic house or international organization to an individual, usually in recognition of distinguished service to a nation or to humanity. The distinction between orders and decorations is somewhat vague, except that most...
in the Kingdom of Prussia
Kingdom of Prussia
The Kingdom of Prussia was a German kingdom from 1701 to 1918. Until the defeat of Germany in World War I, it comprised almost two-thirds of the area of the German Empire...
. The order was founded on 17 January 1701 by Elector Friedrich III of Brandenburg (who became Friedrich I, King in Prussia, the following day). In his Dutch exile after WWI, deposed Emperor Wilhelm II continued to award the order to his family. He made his second wife, Princess Hermine Reuss of Greiz, a Lady in the Order of the Black Eagle.

The statutes of the order were published on 18 January 1701, and revised in 1847. Membership in the Order of the Black Eagle was limited to a small number of knights, and was divided into two classes: members of reigning houses (further divided into members of the House of Hohenzollern
House of Hohenzollern
The House of Hohenzollern is a noble family and royal dynasty of electors, kings and emperors of Prussia, Germany and Romania. It originated in the area around the town of Hechingen in Swabia during the 11th century. They took their name from their ancestral home, the Burg Hohenzollern castle near...
and members of other houses, both German and foreign) and capitular knights. Before 1847, membership was limited to nobles, but after that date, capitular knights who were not nobles were raised to the nobility (Adelstand). Capitular knights were generally high-ranking government officials or military officers.

The badge of the Order was a gold Maltese cross
Maltese cross
The Maltese cross, also known as the Amalfi cross, is identified as the symbol of an order of Christian warriors known as the Knights Hospitaller or Knights of Malta and through them came to be identified with the Mediterranean island of Malta and is one of the National symbols of Malta...
, enamelled in blue, with gold-crowned black eagles between the arms of the cross. The gold center medallion bore the royal monogram of Friedrich I ("FR", for Fredericus Rex).

This badge was worn from either a broad ribbon (or sash) or a collar (or "chain"). The ribbon of the Order was an orange moiré
Moiré pattern
In physics, a moiré pattern is an interference pattern created, for example, when two grids are overlaid at an angle, or when they have slightly different mesh sizes.- Etymology :...
sash worn from the left shoulder to the right hip, with the badge resting on the hip. The collar or chain (Kette) was worn around the neck and resting upon the shoulders, with the badge suspended from the front center; the collar had twenty-four elaborate interlocking links: alternatively a black eagle and a device featuring a center medallion with the motto of the Order (Suum Cuique
Jedem das Seine
"'" is a German translation of "'", the Latin phrase meaning "to each his own" or "to each what he deserves."- Antiquity :The Latin phrase goes back to an old Greek principle of justice which translates literally into English as "to each his own"...
-- literally "To each his own," but idiomatically "To each according to his merits"), a series of FRs forming a cross pattern, a blue enameled ring around this, and crowns at each cross point.

The star of the Order was a silver eight-pointed star, with straight or faceted rays depending on the jeweler's design. The center medallion displayed a black eagle (which gripped a wreath of laurels in its left claws and a scepter in its right) on a golden background, surrounded by a white enamelled ring bearing a wreath of laurels and the motto of the Order.

At meetings of the chapter of the Order of the Black Eagle and at certain ceremonies, the knights wore red velvet capes with blue linings. Embroidered on the left shoulder of each cape was a large star of the Order.

From its founding in 1701 to 1918, the Order of the Black Eagle was awarded 407 times, with 57 of these installations during the reign of Friedrich I (1701-1713). In 1918, the knights of the order totalled 118: fourteen were members of the Prussian royal house, one was a member of the Princely House of Hohenzollern, forty-nine (of whom nine were from states then at war with Germany) were members of other reigning houses, and fifty-four (including seventeen who had not yet been fully installed) were nonroyal Germans. Subjects of the Prussian King receiving the order which was only given in one class were promoted to the peerage and received hereditary title.

One may deduce from the Prussian State Handbooks that the Order of the Black Eagle (as well as, by statute, the other Prussian orders, as mentioned above) was conferred upon all male members of the royal family on their tenth birthdays; these men the collar of the Order on their eighteenth birthdays. The Order was also conferred upon Prussian queens (and, later, German empresses), though other female members of the royal family usually received the Order of Louise
Order of Louise
The Order of Louise was founded in 1814 by Frederick William III of Prussia to honor his late wife, the much beloved Queen Luise . This order was chivalric in nature, but was intended strictly for women whose service to Germany was worthy of such high national recognition...
instead.


Sovereigns and Masters of the Order 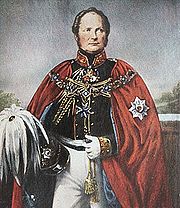 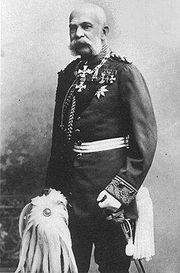 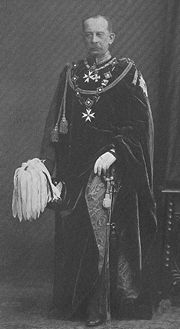 The Order of the Black Eagle is currently used as the emblem of the German Military Police (Feldjäger
Feldjäger
For the German Military Police in WWII see: Feldjaegerkorps and FeldgendarmerieIn presence Feldjäger is the name of military police of the Bundeswehr, Germany's armed forces. The term Feldjäger, literally meaning field huntsmen or field Jäger, has a long tradition and dates back to the mid-17th...
).
The source of this article is wikipedia, the free encyclopedia.  The text of this article is licensed under the GFDL.