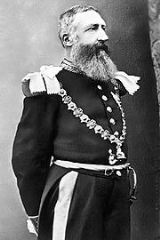 Overview
Leopold II (9 April 1835 – 17 December 1909) was the second king of the Belgians. Born in Brussels
Brussels
Brussels , officially the Brussels Region or Brussels-Capital Region , is the capital of Belgium and the de facto capital of the European Union...
the second (but eldest surviving) son of Leopold I
Leopold I of Belgium
Leopold I was from 21 July 1831 the first King of the Belgians, following Belgium's independence from the Netherlands. He was the founder of the Belgian line of the House of Saxe-Coburg-Gotha...
and Louise-Marie of Orléans, he succeeded his father to the throne on 17 December 1865 and remained king until his death.

Leopold is chiefly remembered as the founder and sole owner of the Congo Free State
Congo Free State
The Congo Free State was a large area in Central Africa which was privately controlled by Leopold II, King of the Belgians. Its origins lay in Leopold's attracting scientific, and humanitarian backing for a non-governmental organization, the Association internationale africaine...
, a private project undertaken by the King. He used Henry Morton Stanley
Henry Morton Stanley
Sir Henry Morton Stanley, GCB, born John Rowlands , was a Welsh journalist and explorer famous for his exploration of Africa and his search for David Livingstone. Upon finding Livingstone, Stanley allegedly uttered the now-famous greeting, "Dr...
to help him lay claim to the Congo, an area now known as the Democratic Republic of the Congo
Democratic Republic of the Congo
The Democratic Republic of the Congo is a state located in Central Africa. It is the second largest country in Africa by area and the eleventh largest in the world...
.

"The Congo Free State is unique in its kind. It has nothing to hide and no secrets and is not beholden to anyone except its founder."