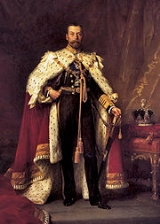 George was a grandson of Queen Victoria and Prince Albert and the first cousin of Tsar Nicholas II of Russia and Kaiser Wilhelm II of Germany. From 1877 until 1891 he served in the Royal Navy
Royal Navy
The Royal Navy is the naval warfare service branch of the British Armed Forces. Founded in the 16th century, it is the oldest service branch and is known as the Senior Service...
. On the death of Victoria in 1901, George's father became King Edward VII, and George was made Prince of Wales
Prince of Wales
Prince of Wales is a title traditionally granted to the heir apparent to the reigning monarch of the United Kingdom of Great Britain and Northern Ireland and the 15 other independent Commonwealth realms...
.

Where did he live?
More

King George V what were his thoughts on WW1
More

1910    George V becomes King of the United Kingdom upon the death of his father, Edward VII.

1911    George V and Mary of Teck are crowned King and Queen of the United Kingdom of Great Britain and Ireland.

1911    King George V of the United Kingdom and Mary of Teck are enthroned as Emperor and Empress of India.

1913    Emily Davison, a suffragette, runs out in front of King George V's horse, Anmer, at the Epsom Derby. She is trampled, never regains consciousness and dies a few days later.

1917    King George V of the United Kingdom issues a Proclamation stating that the male line descendants of the British royal family will bear the surname Windsor.

1921    The Southwark Bridge in London, is opened for traffic by King George V and Queen Mary.

1922    At Windsor Castle, King George V receives the colours of the six Irish regiments that are to be disbanded &ndash; the Royal Irish Regiment, the Connaught Rangers, the South Irish Horse, the Prince of Wales's Leinster Regiment, the Royal Munster Fusiliers and the Royal Dublin Fusiliers.

No more coals to Newcastle, no more Hoares to Paris.