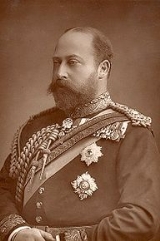 Before his accession to the throne, Edward held the title of Prince of Wales
Prince of Wales
Prince of Wales is a title traditionally granted to the heir apparent to the reigning monarch of the United Kingdom of Great Britain and Northern Ireland and the 15 other independent Commonwealth realms...
longer than anyone else, and was the second longest-serving heir apparent
Heir apparent
An heir apparent or heiress apparent is a person who is first in line of succession and cannot be displaced from inheriting, except by a change in the rules of succession....
in British history. During the long reign of his mother, Queen Victoria, he was largely excluded from political power and came to personify the fashionable, leisured elite.

The Edwardian era, which covered Edward's reign and was named after him, coincided with the start of a new century and heralded significant changes in technology and society, including powered flight
Powered flight
Powered flight is flight achieved using onboard power to generate propulsive thrust and/or lift. Birds and insects use wings, in a variety of ways, to achieve powered flight. Man has developed several forms of powered aircraft. The term powered flight is also sometimes used excluding the natural...
and the rise of socialism
History of socialism in Great Britain
The History of socialism in the United Kingdom is generally thought to stretch back to the 19th century. Starting to arise in the aftermath of the English Civil War notions of socialism in Great Britain and Northern Ireland have taken many different forms from the utopian philanthropism of Robert...
.

When the Prince of Wales later Edward V11 visited Hiawatha Indian Reserve (on Rice Lake, Ontario, Canada) in 1860, did he give a gift to Hiawatha? If...
More

Edward vii and the labour party

A friend of mine recently found a coin that is approximately 1 1/4 in. in diameter. Around the top front edge the following is printed: EDWARDVS VII D...
More
x