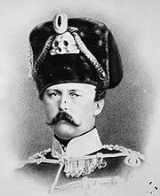 From 1842 to 1846, Frederick Charles was under the military tutelage of then major Albrecht von Roon
Albrecht Graf von Roon
Albrecht Theodor Emil Graf von Roon was a Prussian soldier and statesman. As Minister of War 1859–1873 Roon, along with Otto von Bismarck and Helmuth von Moltke, was a dominating figure in Prussia's government during the key decade of the 1860s, when a series of successful wars against Denmark,...
, who accompagnied the Prince to the University of Bonn
University of Bonn
The University of Bonn is a public research university located in Bonn, Germany. Founded in its present form in 1818, as the linear successor of earlier academic institutions, the University of Bonn is today one of the leading universities in Germany. The University of Bonn offers a large number...
in 1846. After his studies, the Prince served as a captain on Wrangel
Friedrich Graf von Wrangel
Friedrich Heinrich Ernst Graf von Wrangel was a Generalfeldmarschall of the Prussian Army. He was nicknamed Papa Wrangel....
's staff during the Schleswig campaign of 1848. Promoted to major on the general staff, he partook in a campaign in Baden
Baden
Baden is a historical state on the east bank of the Rhine in the southwest of Germany, now the western part of the Baden-Württemberg of Germany....
during which he was wounded. During the following peace years he was promoted to colonel in 1852, major general in 1854 and lieutenant general in 1856. In 1860, the Prince published a military book, titled, "Eine militärische Denkschrift von P. F. K.". Promoted to General der Kavallerie, the Prince took part in the Second Schleswig War of 1864 against Denmark
Denmark
Denmark is a Scandinavian country in Northern Europe. The countries of Denmark and Greenland, as well as the Faroe Islands, constitute the Kingdom of Denmark . It is the southernmost of the Nordic countries, southwest of Sweden and south of Norway, and bordered to the south by Germany. Denmark...
, where he held command over the Prussian troops in the Austro-Prussian expeditionary force.

He served with distinction in the Austro-Prussian War
Austro-Prussian War
The Austro-Prussian War was a war fought in 1866 between the German Confederation under the leadership of the Austrian Empire and its German allies on one side and the Kingdom of Prussia with its German allies and Italy on the...
, where he commanded the First Army; consisting of 2nd, 3rd and 4th corps. Arriving first at Königgrätz
Battle of Königgrätz
The Battle of Königgrätz , also known as the Battle of Sadowa, Sadová, or Hradec Králové, was the decisive battle of the Austro-Prussian War, in which the Kingdom of Prussia defeated the Austrian Empire...
, he held the numerically superior Austrians at bay until his cousin Crown Prince Frederick William
Frederick III, German Emperor
Frederick III was German Emperor and King of Prussia for 99 days in 1888, the Year of the Three Emperors. Friedrich Wilhelm Nikolaus Karl known informally as Fritz, was the only son of Emperor William I and was raised in his family's tradition of military service...
and his Second army came up and attacked the Austrians in the flank.

At the outbreak of the Franco-Prussian War
Franco-Prussian War
The Franco-Prussian War or Franco-German War, often referred to in France as the 1870 War was a conflict between the Second French Empire and the Kingdom of Prussia. Prussia was aided by the North German Confederation, of which it was a member, and the South German states of Baden, Württemberg and...
, the Prince was given command of the Second Army, with which he distinguished himself at the Battle of Spicheren
Battle of Spicheren
The Battle of Spicheren, also known as the Battle of Forbach, was a battle during the Franco-Prussian War. The German victory compelled the French to withdraw to the defenses of Metz.- History :...
and the battles of Vionville-Mars le Tour
Battle of Mars-La-Tour
The Battle of Mars-La-Tour was fought on 16 August 1870 during the Franco-Prussian War near the town of Mars-La-Tour in northeast France. Two Prussian corps encountered the entire French Army of the Rhine in a meeting engagement, and with the surprise entailed, successfully forced the Army of the...
and Gravelotte-St.Privat
Battle of Gravelotte
The Battle of Gravelotte was a battle of the Franco-Prussian War named after Gravelotte, a village in Lorraine between Metz and the former French–German frontier.-Terrain and armies:...
and the following Siege of Metz
Siege of Metz
The Siege of Metz lasting from 19 August – 27 October 1870 was fought during the Franco-Prussian War and ended in a decisive Prussian victory.-History:...
. After the fall of Metz
Metz
Metz is a city in the northeast of France located at the confluence of the Moselle and the Seille rivers.Metz is the capital of the Lorraine region and prefecture of the Moselle department. Located near the tripoint along the junction of France, Germany, and Luxembourg, Metz forms a central place...
, his army was sent to the Loire to clear the area around Orléans
Orléans
-Prehistory and Roman:Cenabum was a Gallic stronghold, one of the principal towns of the Carnutes tribe where the Druids held their annual assembly. It was conquered and destroyed by Julius Caesar in 52 BC, then rebuilt under the Roman Empire...
, where French troops, first under Aurelle de Paladines
Louis d'Aurelle de Paladines
Louis Jean-Baptiste d'Aurelle de Paladines was a French general.He was born at Le Malzieu-Ville, Lozère, educated at the Prytanée National Militaire and St Cyr, and entered the army as sub-lieutenant of foot in 1824...
, then under Chanzy, were trying to march north to relieve Paris
Paris
Paris is the capital and largest city in France, situated on the river Seine, in northern France, at the heart of the Île-de-France region...
. He won battles at Orleans and Le Mans
Battle of Le Mans
The Battle of Le Mans was a Prussian victory during the Franco-Prussian War which ended French resistance in western France.-Background:After the victory at the Battle of Orleans , Prince Friedrich Karl of Prussia marched his army further to the west towards Le Mans. Antoine Chanzy had under his...
. For his services he was promoted to the rank of Generalfeldmarschall
Generalfeldmarschall
Field Marshal or Generalfeldmarschall in German, was a rank in the armies of several German states and the Holy Roman Empire; in the Austrian Empire, the rank Feldmarschall was used...
. After the war, the Prince was made Inspector-General and was given the rank of Field Marshal of Russia by Alexander II of Russia
Alexander II of Russia
Alexander II , also known as Alexander the Liberator was the Emperor of the Russian Empire from 3 March 1855 until his assassination in 1881...
.

In 1878 he was created an honorary Knight Grand Cross of the Order of the Bath
Order of the Bath
The Most Honourable Order of the Bath is a British order of chivalry founded by George I on 18 May 1725. The name derives from the elaborate mediæval ceremony for creating a knight, which involved bathing as one of its elements. The knights so created were known as Knights of the Bath...
.


After the birth of their fourth daughter, Luise Margarete, Prince Frederick Charles reportedly boxed his wife's ears for not producing a son.