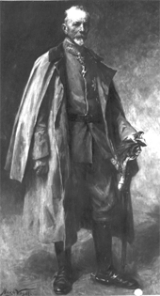 Encyclopedia
Friedrich Bertram Sixt von Armin (27 November 1851 – 30 September 1936) was a German
Germany
Germany , officially the Federal Republic of Germany , is a federal parliamentary republic in Europe. The country consists of 16 states while the capital and largest city is Berlin. Germany covers an area of 357,021 km2 and has a largely temperate seasonal climate...
general
General
A general officer is an officer of high military rank, usually in the army, and in some nations, the air force. The term is widely used by many nations of the world, and when a country uses a different term, there is an equivalent title given....
during the First World War
World War I
World War I , which was predominantly called the World War or the Great War from its occurrence until 1939, and the First World War or World War I thereafter, was a major war centred in Europe that began on 28 July 1914 and lasted until 11 November 1918...
.

Sixt von Armin was born in Wetzlar
Wetzlar
Wetzlar is a city in the state of Hesse, Germany. Located at 8° 30′ E, 50° 34′ N, Wetzlar straddles the river Lahn and is on the German Timber-Framework Road which passes mile upon mile of half-timbered houses. Historically, the city has acted as the hub of the Lahn-Dill-Kreis on the north edge of...
, an exclave of the Rhine Province
Rhine Province
The Rhine Province , also known as Rhenish Prussia or synonymous to the Rhineland , was the westernmost province of the Kingdom of Prussia and the Free State of Prussia, within the German Reich, from 1822-1946. It was created from the provinces of the Lower Rhine and Jülich-Cleves-Berg...
. After leaving school in 1870, he joined the 4th Grenadier Guards Regiment as a cadet
Cadet
A cadet is a trainee to become an officer in the military, often a person who is a junior trainee. The term comes from the term "cadet" for younger sons of a noble family.- Military context :...
, and was seriously wounded in the Franco-Prussian War
Franco-Prussian War
The Franco-Prussian War or Franco-German War, often referred to in France as the 1870 War was a conflict between the Second French Empire and the Kingdom of Prussia. Prussia was aided by the North German Confederation, of which it was a member, and the South German states of Baden, Württemberg and...
at the Battle of Gravelotte
Battle of Gravelotte
The Battle of Gravelotte was a battle of the Franco-Prussian War named after Gravelotte, a village in Lorraine between Metz and the former French–German frontier.-Terrain and armies:...
. He was awarded the Iron Cross, Second Class
Iron Cross
The Iron Cross is a cross symbol typically in black with a white or silver outline that originated after 1219 when the Kingdom of Jerusalem granted the Teutonic Order the right to combine the Teutonic Black Cross placed above a silver Cross of Jerusalem....
, and promoted to lieutenant
Lieutenant
A lieutenant is a junior commissioned officer in many nations' armed forces. Typically, the rank of lieutenant in naval usage, while still a junior officer rank, is senior to the army rank...
. He subsequently served as adjutant
Adjutant
Adjutant is a military rank or appointment. In some armies, including most English-speaking ones, it is an officer who assists a more senior officer, while in other armies, especially Francophone ones, it is an NCO , normally corresponding roughly to a Staff Sergeant or Warrant Officer.An Adjutant...
of the regiment, and also held other positions on the regimental staff.

In 1900, Sixt von Armin was promoted to Oberst
Oberst
Oberst is a military rank in several German-speaking and Scandinavian countries, equivalent to Colonel. It is currently used by both the ground and air forces of Austria, Germany, Switzerland, Denmark and Norway. The Swedish rank överste is a direct translation, as are the Finnish rank eversti...
(colonel) and given command of the 55th Infantry Regiment. The following year, he was appointed Chief of Staff of the Gardekorps. He was promoted to major general
Major General
Major general or major-general is a military rank used in many countries. It is derived from the older rank of sergeant major general. A major general is a high-ranking officer, normally subordinate to the rank of lieutenant general and senior to the ranks of brigadier and brigadier general...
in 1903, and to lieutenant general
Lieutenant General
Lieutenant General is a military rank used in many countries. The rank traces its origins to the Middle Ages where the title of Lieutenant General was held by the second in command on the battlefield, who was normally subordinate to a Captain General....
in 1906.

Following a period of service at general headquarters, in 1908 Sixt von Armin was appointed as commander of the 13th Division, then stationed in Münster
Münster
Münster is an independent city in North Rhine-Westphalia, Germany. It is located in the northern part of the state and is considered to be the cultural centre of the Westphalia region. It is also capital of the local government region Münsterland...
. In 1911, he succeeded Paul von Hindenburg
Paul von Hindenburg
Paul Ludwig Hans Anton von Beneckendorff und von Hindenburg , known universally as Paul von Hindenburg was a Prussian-German field marshal, statesman, and politician, and served as the second President of Germany from 1925 to 1934....
as commanding officer of the IV Corps in Magdeburg
Magdeburg
Magdeburg , is the largest city and the capital city of the Bundesland of Saxony-Anhalt, Germany. Magdeburg is situated on the Elbe River and was one of the most important medieval cities of Europe....
. In 1913, Sixt von Armin was promoted to general.

At the beginning of the First World War, Sixt von Armin and the IV Corps were a part of the First Army on the Western Front
Western Front (World War I)
Following the outbreak of World War I in 1914, the German Army opened the Western Front by first invading Luxembourg and Belgium, then gaining military control of important industrial regions in France. The tide of the advance was dramatically turned with the Battle of the Marne...
, where they were heavily involved in the trench warfare
Trench warfare
Trench warfare is a form of occupied fighting lines, consisting largely of trenches, in which troops are largely immune to the enemy's small arms fire and are substantially sheltered from artillery...
that defined the first years of the conflict. For his handling of combat operations on the Western Front, particularly at Arras
Arras
Arras is the capital of the Pas-de-Calais department in northern France. The historic centre of the Artois region, its local speech is characterized as a Picard dialect...
and on the Somme
Somme
Somme is a department of France, located in the north of the country and named after the Somme river. It is part of the Picardy region of France....
, he was awarded the Pour le Mérite
Pour le Mérite
The Pour le Mérite, known informally as the Blue Max , was the Kingdom of Prussia's highest military order for German soldiers until the end of World War I....
in 1916. The following year he was appointed commander of the Fourth Army, and also served as commander-in-chief in the Flanders
Flanders
Flanders is the community of the Flemings but also one of the institutions in Belgium, and a geographical region located in parts of present-day Belgium, France and the Netherlands. "Flanders" can also refer to the northern part of Belgium that contains Brussels, Bruges, Ghent and Antwerp...
region. During his time as commander, the Fourth Army withstood several significant assaults from British and Commonwealth forces, notably the Third Battle of Ypres. For his performance as commander, Sixt von Armin was awarded the Order of the Black Eagle
Order of the Black Eagle
The Order of the Black Eagle was the highest order of chivalry in the Kingdom of Prussia. The order was founded on 17 January 1701 by Elector Friedrich III of Brandenburg . In his Dutch exile after WWI, deposed Emperor Wilhelm II continued to award the order to his family...
, as well as the oak leaf cluster
Oak leaf cluster
An oak leaf cluster is a common device which is placed on U.S. Army and Air Force awards and decorations to denote those who have received more than one bestowal of a particular decoration. The number of oak leaf clusters typically indicates the number of subsequent awards of the decoration...
to the Pour le Mérite.

Sixt von Armin was still in command of the Fourth Army during the Spring Offensive
Spring Offensive
The 1918 Spring Offensive or Kaiserschlacht , also known as the Ludendorff Offensive, was a series of German attacks along the Western Front during World War I, beginning on 21 March 1918, which marked the deepest advances by either side since 1914...
of 1918. On 25 April, his troops captured the Kemmelberg
Kemmelberg
The Kemmelberg, also known as Kemmel Hill or Mont Kemmel, is a 156m high hill near Kemmel in the municipality of Heuvelland in West Flanders, Belgium....
, although they were later forced to retreat to the Antwerp-Maas defensive line.

With the signing of the Armistice
Armistice
An armistice is a situation in a war where the warring parties agree to stop fighting. It is not necessarily the end of a war, but may be just a cessation of hostilities while an attempt is made to negotiate a lasting peace...
on 11 November, Sixt von Armin took command of Army Group A
Army Group A
Army Group A was the name of a number of German Army Groups during World War II.-Western Front, 1940:During the German invasion of the Low Countries and France Army Group A was under the command of General Gerd von Rundstedt, and was responsible for the break-out through the Ardennes...
and returned with it to Germany, where, following the demobilisation of his troops, he resigned.

After the war, Sixt von Armin lived in Magdeburg, where he was a popular speaker and made frequent appearances at public events. When he died in 1936, he was buried with full military honors.