Encyclopedia
Christian pilgrimage was first made to sites connected with the ministry of Jesus
Ministry of Jesus
In the Christian gospels, the Ministry of Jesus begins with his Baptism in the countryside of Judea, near the River Jordan and ends in Jerusalem, following the Last Supper with his disciples. The Gospel of Luke states that Jesus was "about 30 years of age" at the start of his ministry...
. Surviving descriptions of Christian pilgrimages to the Holy Land
Holy Land
The Holy Land is a term which in Judaism refers to the Kingdom of Israel as defined in the Tanakh. For Jews, the Land's identifiction of being Holy is defined in Judaism by its differentiation from other lands by virtue of the practice of Judaism often possible only in the Land of Israel...
and Jerusalem
Jerusalem in Christianity
For Christians, Jerusalem's place in the ministry of Jesus and the Apostolic Age gives it great importance, in addition to its place in the Old Testament, the Hebrew Bible.-Jerusalem in the New Testament and early Christianity:...
date from the 4th century
Christianity in the 4th century
Christianity in the 4th century was dominated by Constantine the Great, and the First Council of Nicea of 325, which was the beginning of the period of the First seven Ecumenical Councils and the attempt to reach an orthodox consensus and to establish a unified Christendom as the State church of...
, when pilgrimage
Pilgrimage
A pilgrimage is a journey or search of great moral or spiritual significance. Typically, it is a journey to a shrine or other location of importance to a person's beliefs and faith...
was encouraged by church fathers like Saint Jerome
Jerome
Saint Jerome was a Roman Christian priest, confessor, theologian and historian, and who became a Doctor of the Church. He was the son of Eusebius, of the city of Stridon, which was on the border of Dalmatia and Pannonia...
and established by Helena, the mother of Constantine the Great
Constantine I and Christianity
During the reign of the Emperor Constantine the Great, Christianity became the dominant religion of the Roman Empire. Constantine, also known as Constantine I, had a significant religious experience following his victory at the Battle of Milvian Bridge in 312...
. Pilgrimages also began to be made to Rome and other sites associated with the Apostles, Saint
Saint
A saint is a holy person. In various religions, saints are people who are believed to have exceptional holiness.In Christian usage, "saint" refers to any believer who is "in Christ", and in whom Christ dwells, whether in heaven or in earth...
s and Christian martyrs
Christian martyrs
A Christian martyr is one who is killed for following Christianity, through stoning, crucifixion, burning at the stake or other forms of torture and capital punishment. The word "martyr" comes from the Greek word μάρτυς, mártys, which means "witness."...
, as well as to places where there have been apparition
Marian apparitions
A Marian apparition is an event in which the Blessed Virgin Mary is believed to have supernaturally appeared to one or more people. They are often given names based on the town in which they were reported, or on the sobriquet which was given to Mary on the occasion of the apparition...
s of the Virgin Mary.

In Christianity however, according to Paul, pilgrimage is not a necessity according to an interpretation of this passage of the Bible
Bible
The Bible refers to any one of the collections of the primary religious texts of Judaism and Christianity. There is no common version of the Bible, as the individual books , their contents and their order vary among denominations...
: 1st Corinthians 9: 19 "Or do you not know that your body is the temple of the Holy Spirit
Holy Spirit
Holy Spirit is a term introduced in English translations of the Hebrew Bible, but understood differently in the main Abrahamic religions.While the general concept of a "Spirit" that permeates the cosmos has been used in various religions Holy Spirit is a term introduced in English translations of...
who is in you, whom you have from God
God in Christianity
In Christianity, God is the eternal being that created and preserves the universe. God is believed by most Christians to be immanent , while others believe the plan of redemption show he will be immanent later...
, and you are not your own? 20 For you were bought at a price; therefore glorify God in your body and in your spirit, which are God's."

The Holy Land
Holy Land
The Holy Land is a term which in Judaism refers to the Kingdom of Israel as defined in the Tanakh. For Jews, the Land's identifiction of being Holy is defined in Judaism by its differentiation from other lands by virtue of the practice of Judaism often possible only in the Land of Israel...
, location of many events in the Old Testament
Old Testament
The Old Testament, of which Christians hold different views, is a Christian term for the religious writings of ancient Israel held sacred and inspired by Christians which overlaps with the 24-book canon of the Masoretic Text of Judaism...
and New Testament
New Testament
The New Testament is the second major division of the Christian biblical canon, the first such division being the much longer Old Testament....
: 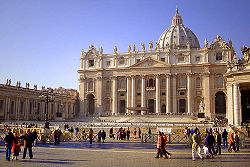 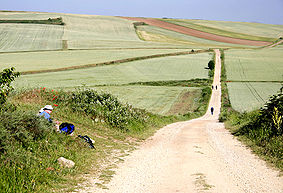 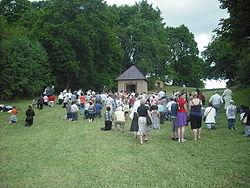 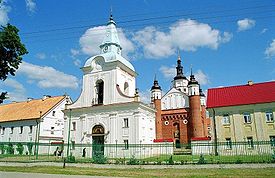 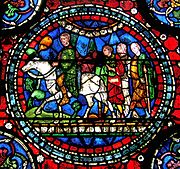 World Youth Day
World Youth Day
World Youth Day is a youth-oriented Catholic Church event. While the event itself celebrates the Catholic faith, the invitation to attend extends to all youth, regardless of religious convictions....
is a major Catholic Pilgrimage, specifically for people aged 16–35. It is held internationally every 2–3 years. In 2005, it was held in Cologne
Cologne
Cologne is Germany's fourth-largest city , and is the largest city both in the Germany Federal State of North Rhine-Westphalia and within the Rhine-Ruhr Metropolitan Area, one of the major European metropolitan areas with more than ten million inhabitants.Cologne is located on both sides of the...
, Germany. In 1995, the largest gathering of all time was to World Youth Day in Manila
Manila
Manila is the capital of the Philippines. It is one of the sixteen cities forming Metro Manila.Manila is located on the eastern shores of Manila Bay and is bordered by Navotas and Caloocan to the north, Quezon City to the northeast, San Juan and Mandaluyong to the east, Makati on the southeast,...
, Philippines
Philippines
The Philippines , officially known as the Republic of the Philippines , is a country in Southeast Asia in the western Pacific Ocean. To its north across the Luzon Strait lies Taiwan. West across the South China Sea sits Vietnam...
, where four million people from all over the world attended.

In the media both manifestations are usually referred to as 'pilgrimages', but actually in the strict meaning of the word they are not pilgrimages as they are (each time) once-only religious gatherings for a specific purpose (funeral, religious renewal for the youth) and not focused at a shrine based cultus-object for veneration. However, since the funeral, the proper grave of John Paul II is actually indeed becoming a new site of pilgrimage in Rome.
The source of this article is wikipedia, the free encyclopedia.  The text of this article is licensed under the GFDL.