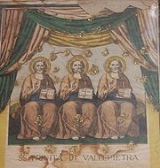 Overview
In Christianity
Christianity
Christianity is a monotheistic religion based on the life and teachings of Jesus as presented in canonical gospels and other New Testament writings...
, God is the eternal being that created and preserves the universe. God is believed by most Christians to be immanent
Immanence
Immanence refers to philosophical and metaphysical theories of divine presence, in which the divine is seen to be manifested in or encompassing of the material world. It is often contrasted with theories of transcendence, in which the divine is seen to be outside the material world...
(meaning that he is with and within all things), while others believe the plan of redemption
Redemption (theology)
Redemption is a concept common to several theologies. It is generally associated with the efforts of people within a faith to overcome their shortcomings and achieve the moral positions exemplified in their faith.- In Buddhism :...
show he will be immanent later
Christian eschatology
Christian eschatology is a major branch of study within Christian theology. Eschatology, from two Greek words meaning last and study , is the study of the end of things, whether the end of an individual life, the end of the age, or the end of the world...
. Most trinitarian
Trinity
The Christian doctrine of the Trinity defines God as three divine persons : the Father, the Son , and the Holy Spirit. The three persons are distinct yet coexist in unity, and are co-equal, co-eternal and consubstantial . Put another way, the three persons of the Trinity are of one being...
Christians believe he is also transcendent (meaning that he is outside space and time, and therefore eternal and unable to be changed by forces within the universe), based on the New Testament
New Testament
The New Testament is the second major division of the Christian biblical canon, the first such division being the much longer Old Testament....
only though God the Son
God the Son
God the Son is the second person of the Trinity in Christian theology. The doctrine of the Trinity identifies Jesus of Nazareth as God the Son, united in essence but distinct in person with regard to God the Father and God the Holy Spirit...
, a Jewish God-man
Hypostatic union
Hypostatic union is a technical term in Christian theology employed in mainstream Christology to describe the union of Christ's humanity and divinity in one hypostasis.The First Council of Ephesus recognised this doctrine and affirmed its importance, stating that the...
called Jesus, was on earth during his Ministry
Ministry of Jesus
In the Christian gospels, the Ministry of Jesus begins with his Baptism in the countryside of Judea, near the River Jordan and ends in Jerusalem, following the Last Supper with his disciples. The Gospel of Luke states that Jesus was "about 30 years of age" at the start of his ministry...
and will return to earth in the Second Coming of Christ, to fulfill his commitments as the Christian Messiah
Christ
Christ is the English term for the Greek meaning "the anointed one". It is a translation of the Hebrew , usually transliterated into English as Messiah or Mashiach...
.

God
God
God is the English name given to a singular being in theistic and deistic religions who is either the sole deity in monotheism, or a single deity in polytheism....
is usually held to have the properties
Attributes of God
The Attributes of God in Christian theology are those characteristics of God revealed in the Bible.-Classification:Many Reformed theologians distinguish between the communicable attributes and the incommunicable attributes...
of holiness
Sacred
Holiness, or sanctity, is in general the state of being holy or sacred...
, justice
Justice
Justice is a concept of moral rightness based on ethics, rationality, law, natural law, religion, or equity, along with the punishment of the breach of said ethics; justice is the act of being just and/or fair.-Concept of justice:...
, omnipotence
Omnipotence
Omnipotence is unlimited power. Monotheistic religions generally attribute omnipotence to only the deity of whichever faith is being addressed...
, omniscience
Omniscience
Omniscience omniscient point-of-view in writing) is the capacity to know everything infinitely, or at least everything that can be known about a character including thoughts, feelings, life and the universe, etc. In Latin, omnis means "all" and sciens means "knowing"...
, omnibenevolence
Omnibenevolence
Omnibenevolence is defined by the Oxford English Dictionary as "unlimited or infinite benevolence". It is often held to be impossible, or at least improbable, for a deity to exhibit such property along side omniscience and omnipotence as a result of the problem of evil...
, omnipresence
Omnipresence
Omnipresence or ubiquity is the property of being present everywhere. According to eastern theism, God is present everywhere. Divine omnipresence is thus one of the divine attributes, although in western theism it has attracted less philosophical attention than such attributes as omnipotence,...
and immortality
Immortality
Immortality is the ability to live forever. It is unknown whether human physical immortality is an achievable condition. Biological forms have inherent limitations which may or may not be able to be overcome through medical interventions or engineering...
.

The Christian Bible never speaks of God
God
God is the English name given to a singular being in theistic and deistic religions who is either the sole deity in monotheism, or a single deity in polytheism....
in an impersonal sense.