Encyclopedia
Tepeyac or the Hill of Tepeyac, historically known by the names "Tepeyacac" and "Tepeaquilla", is located inside Gustavo A. Madero
Gustavo A. Madero, D.F.
Gustavo A. Madero is one of the 16 delegaciones into which Mexico's Federal District is divided.-Origins:Founded as "Villa de Guadalupe" in 1563, it became the city of "Villa de Guadalupe Hidalgo" in 1828, and finally a delegación in 1931; as such, it was named after Gustavo A. Madero, the brother...
, the northernmost delegación or borough
Borough
A borough is an administrative division in various countries. In principle, the term borough designates a self-governing township although, in practice, official use of the term varies widely....
of the Mexican Federal District. It is the site where Saint
Saint
A saint is a holy person. In various religions, saints are people who are believed to have exceptional holiness.In Christian usage, "saint" refers to any believer who is "in Christ", and in whom Christ dwells, whether in heaven or in earth...
Juan Diego
Juan Diego Cuauhtlatoatzin
Juan Diego Cuauhtlatoatzin or Juan Diego was, according to Mexican Catholic tradition, an indigenous Mexican who reported a Marian apparition, Our Lady of Guadalupe, in 1531. The legend of the apparition has had a significant impact on the spread of the Catholic faith within Mexico...
met the Virgin of Guadalupe
Our Lady of Guadalupe
Our Lady of Guadalupe , also known as the Virgin of Guadalupe is a celebrated Catholic icon of the Virgin Mary.According to tradition, on December 9, 1531 Juan Diego, a simple indigenous peasant, had a vision of a young woman while he was on a hill in the Tepeyac desert, near Mexico City. The lady...
in December of 1531, and received the iconic image of Our Lady of Guadalupe. The Basilica of Guadalupe is located there today as one of the most visited Catholic shrines in the world. 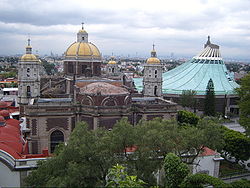 Tepeyac is also believed to have been a Pre-Columbian
Pre-Columbian era
The pre-Columbian era incorporates all period subdivisions in the history and prehistory of the Americas before the appearance of significant European influences on the American continents, spanning the time of the original settlement in the Upper Paleolithic period to European colonization during...
worship site for the indigenous
Indigenous peoples
Indigenous peoples are ethnic groups that are defined as indigenous according to one of the various definitions of the term, there is no universally accepted definition but most of which carry connotations of being the "original inhabitants" of a territory....
mother Goddess
Goddess
A goddess is a female deity. In some cultures goddesses are associated with Earth, motherhood, love, and the household. In other cultures, goddesses also rule over war, death, and destruction as well as healing....
Tonantzin
Tonantzin
In Aztec mythology and among present-day Nahuas, Tonantzin 'Our Revered Mother' is a general title bestowed upon female deities. Informants of Sahagún, for example, called a frightening goddess of war and childbirth, Cihuacoatl, by this title...
.

In Nahuatl, Tepeyacac is a proper noun, a combination of tepetl ("mountain"), yacatl ("nose"), and the relational word -c, ("at"). According to scholars of the language of Nahuatl
Nahuatl
Nahuatl is thought to mean "a good, clear sound" This language name has several spellings, among them náhuatl , Naoatl, Nauatl, Nahuatl, Nawatl. In a back formation from the name of the language, the ethnic group of Nahuatl speakers are called Nahua...
, "The term would generally be expected to mean a settlement on the ridge or brow of a hill. Since yacatl (the nose going first) often implies antecedence, here the word may refer to the fact that the hill is the first and most prominent of a series of three."
The source of this article is wikipedia, the free encyclopedia.  The text of this article is licensed under the GFDL.