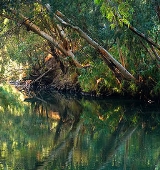 Overview
The Jordan River or River Jordan (British English
British English
British English, or English , is the broad term used to distinguish the forms of the English language used in the United Kingdom from forms used elsewhere...
) (Hebrew
Hebrew language
Hebrew is a Semitic language of the Afroasiatic language family. Culturally, is it considered by Jews and other religious groups as the language of the Jewish people, though other Jewish languages had originated among diaspora Jews, and the Hebrew language is also used by non-Jewish groups, such...
: נהר הירדן Nehar haYarden, Nahr al-Urdun) is a 251 kilometres (156 mi) long river
River
A river is a natural watercourse, usually freshwater, flowing towards an ocean, a lake, a sea, or another river. In a few cases, a river simply flows into the ground or dries up completely before reaching another body of water. Small rivers may also be called by several other names, including...
in West Asia flowing to the Dead Sea
Dead Sea
The Dead Sea , also called the Salt Sea, is a salt lake bordering Jordan to the east and Israel and the West Bank to the west. Its surface and shores are below sea level, the lowest elevation on the Earth's surface. The Dead Sea is deep, the deepest hypersaline lake in the world...
. Currently, the river serves as the eastern border of the State of Israel, though it differs from the eastern border of "Eretz Yisra'el", the Land of Israel
Land of Israel
The Land of Israel is the Biblical name for the territory roughly corresponding to the area encompassed by the Southern Levant, also known as Canaan and Palestine, Promised Land and Holy Land. The belief that the area is a God-given homeland of the Jewish people is based on the narrative of the...
. In Christian tradition, Jesus
Jesus
Jesus of Nazareth , commonly referred to as Jesus Christ or simply as Jesus or Christ, is the central figure of Christianity...
was baptised
Baptism of Jesus
The baptism of Jesus marks the beginning of Jesus Christ's public ministry. This event is recorded in the Canonical Gospels of Matthew, Mark and Luke. In John 1:29-33 rather than a direct narrative, the Baptist bears witness to the episode...
in it by John the Baptist
John the Baptist
John the Baptist was an itinerant preacher and a major religious figure mentioned in the Canonical gospels. He is described in the Gospel of Luke as a relative of Jesus, who led a movement of baptism at the Jordan River...
. The Hashemite Kingdom of Jordan
Jordan
Jordan , officially the Hashemite Kingdom of Jordan , Al-Mamlaka al-Urduniyya al-Hashemiyya) is a kingdom on the East Bank of the River Jordan. The country borders Saudi Arabia to the east and south-east, Iraq to the north-east, Syria to the north and the West Bank and Israel to the west, sharing...
takes its name from this river.

The river drops rapidly in a 75 kilometre run to swampy Lake Hula, which is slightly above sea level
Sea level
Mean sea level is a measure of the average height of the ocean's surface ; used as a standard in reckoning land elevation...
.

What the differance between the second coming and the rapture

How deep is the River Jordan? What does the root word for Jordan from Greek or Hebrew mean?
More

How is the Jordan River used?
More
x