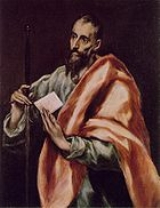 Overview
Paul the Apostle also known as Saul of Tarsus, is described in the Christian New Testament
New Testament
The New Testament is the second major division of the Christian biblical canon, the first such division being the much longer Old Testament....
as one of the most influential early Christian
Early Christianity
Early Christianity is generally considered as Christianity before 325. The New Testament's Book of Acts and Epistle to the Galatians records that the first Christian community was centered in Jerusalem and its leaders included James, Peter and John....
missionaries
Missionary
A missionary is a member of a religious group sent into an area to do evangelism or ministries of service, such as education, literacy, social justice, health care and economic development. The word "mission" originates from 1598 when the Jesuits sent members abroad, derived from the Latin...
, with the writings ascribed to him by the church
Pauline epistles
The Pauline epistles, Epistles of Paul, or Letters of Paul, are the thirteen New Testament books which have the name Paul as the first word, hence claiming authorship by Paul the Apostle. Among these letters are some of the earliest extant Christian documents...
forming a considerable portion of the New Testament. The influence on Christian thinking
Pauline Christianity
Pauline Christianity is a term used to refer to the Christianity associated with the beliefs and doctrines espoused by Paul of Tarsus through his writings. Most of orthodox Christianity relies heavily on these teachings and considers them to be amplifications and explanations of the teachings of...
of the epistles ascribed to him has been significant, due in part to his association as a prominent apostle
Apostle (Christian)
The term apostle is derived from Classical Greek ἀπόστολος , meaning one who is sent away, from στέλλω + από . The literal meaning in English is therefore an "emissary", from the Latin mitto + ex...
of Christianity during the spreading of the Gospel
Gospel
A gospel is an account, often written, that describes the life of Jesus of Nazareth. In a more general sense the term "gospel" may refer to the good news message of the New Testament. It is primarily used in reference to the four canonical gospels of Matthew, Mark, Luke, and John...
through early Christian communities
Early centers of Christianity
Early Christianity spread from Western Asia, throughout the Roman Empire, and beyond into East Africa and South Asia, reaching as far as India. At first, this development was closely connected to centers of Hebrew faith, in the Holy Land and the Jewish diaspora...
across the Roman Empire
Roman Empire
The Roman Empire was the post-Republican period of the ancient Roman civilization, characterised by an autocratic form of government and large territorial holdings in Europe and around the Mediterranean....
.

According to the writings in the New Testament, Paul was known as Saul prior to his conversion, and was dedicated to the persecution of the early disciples
Disciple (Christianity)
In Christianity, the disciples were the students of Jesus during his ministry. While Jesus attracted a large following, the term disciple is commonly used to refer specifically to "the Twelve", an inner circle of men whose number perhaps represented the twelve tribes of Israel...
of Jesus
Jesus
Jesus of Nazareth , commonly referred to as Jesus Christ or simply as Jesus or Christ, is the central figure of Christianity...
in the area of Jerusalem.

Where in the Bible can i find how many Languages Paul could speak? Thanks

Did Paul have children

His role in the early church

How did Paul feel about women in the Church?

What was his life like prior to his conversion?

Did Paul write the book of Hebrews ?