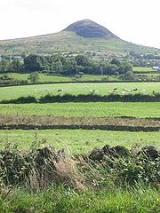 Overview
Saint Patrick was a Romano-Briton and Christian
Christianity
Christianity is a monotheistic religion based on the life and teachings of Jesus as presented in canonical gospels and other New Testament writings...
missionary
Missionary
A missionary is a member of a religious group sent into an area to do evangelism or ministries of service, such as education, literacy, social justice, health care and economic development. The word "mission" originates from 1598 when the Jesuits sent members abroad, derived from the Latin...
, who is the most generally recognized patron saint
Patron saint
A patron saint is a saint who is regarded as the intercessor and advocate in heaven of a nation, place, craft, activity, class, clan, family, or person...
of Ireland
Ireland
Ireland is an island to the northwest of continental Europe. It is the third-largest island in Europe and the twentieth-largest island on Earth...
or the Apostle
Apostle (Christian)
The term apostle is derived from Classical Greek ἀπόστολος , meaning one who is sent away, from στέλλω + από . The literal meaning in English is therefore an "emissary", from the Latin mitto + ex...
of Ireland, although Brigid of Kildare
Brigid of Kildare
Saint Brigit of Kildare, or Brigit of Ireland , nicknamed Mary of the Gael is one of Ireland's patron saints along with Saints Patrick and Columba...
and Colmcille
Columba
Saint Columba —also known as Colum Cille , Colm Cille , Calum Cille and Kolban or Kolbjørn —was a Gaelic Irish missionary monk who propagated Christianity among the Picts during the Early Medieval Period...
are also formally patron saints.

Two authentic letters from him survive, from which come the only universally accepted details of his life. When he was about 16, he was captured from Wales by Irish raiders and taken as a slave to Ireland, where he lived for six years before escaping and returning to his family.

I am not addressing my own people, nor my fellow citizens of the holy Romans, but those who are now become citizens of demons by reason of their evil works. They have chosen, by their hostile deeds, to live in death; comrades of the Scotti and Picts and of all who behave like apostates, bloody men who have steeped themselves in the blood of innocent Christians. The very same people I have begotten for God; their number beyond count, I myself confirmed them in Christ.

Because of all this, I am at a loss to know whether to weep more for those they killed or those that are captured: or indeed for these men themselves whom the devil has taken fast for his slaves. In truth, they will bind themselves alongside him in the pains of the everlasting pit: for "he who sins is a slave already" and is to be called "son of the devil."

I do not overreach myself, for I too have my part to play with "those whom he has called to himself and predestined" to teach the gospel in the midst of considerable persecutions "as far as the ends of the earth, even if the enemy reveals h's true envy through the tyranny of Coroticus, who fears neither God nor the priests whom he has chosen and to whom he has given the highest divine power, namely that "those whom they bind on earth are bound in heaven."

How bitterly they despise me! just see how your sheep are torn apart and despoiled, and by those gangsters I have named, bound to the last man by the inimical mind of Coroticus. Far away from the love of God is the man who betrays my Christians into the hands of the Scotti and Picts. "Ravenous wolves" have gulped down the Lord's own flock, which was flourishing in Ireland and tended with utmost care.

I grieve for you, how I mourn for you, who are so very dear to me, but again I can rejoice within my heart, not for nothing "have I labored," neither has my exile been "in vain."

Now you, Coroticus— and your gangsters, rebels all against Christ, now where do you see yourselves? You gave away girls like prizes: not yet women, but baptized. All for some petty temporal gain that will pass in the very next instant. "Like a cloud passes, or smoke blown in the wind," so will "sinners, who cheat, slip away from the face of the Lord. But the just will feast for sure" with Christ. "They will judge the nations" and unjust kings "they will lord over" for world after world. Amen.