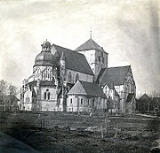 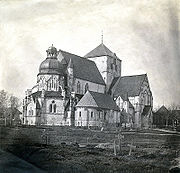 In Norway it was the VI or six kings who introduced Christianity, which first became known to the people during their martial expeditions. The work of Christianization begun by Haakon the Good (d: 981) (Maurer, "Die Bekehrung des norwegischen Stammes", Munich, 1855, I, ii, 168) was carried on by Olaf Trygvesson (d. 1000) and Saint Olaf Haraldsson (Olaf, d. 1030). Both were converted Vikings, the former having been baptized at Andover, England, by Bishop Aelfeah of Winchester
Winchester
Winchester is a historic cathedral city and former capital city of England. It is the county town of Hampshire, in South East England. The city lies at the heart of the wider City of Winchester, a local government district, and is located at the western end of the South Downs, along the course of...
(England), and the latter at Rouen
Rouen
Rouen , in northern France on the River Seine, is the capital of the Haute-Normandie region and the historic capital city of Normandy. Once one of the largest and most prosperous cities of medieval Europe , it was the seat of the Exchequer of Normandy in the Middle Ages...
(Normandy) by Archbishop Robert

In 997 Olaf Trygvesson founded at the mouth of the River Nid the city of Nidaros, afterwards called Trondhjem, where he built a royal palace and a church; he laboured to spread Christianity in Norway, Orkney, Shetland, the Faroe Islands
Faroe Islands
The Faroe Islands are an island group situated between the Norwegian Sea and the North Atlantic Ocean, approximately halfway between Scotland and Iceland. The Faroe Islands are a self-governing territory within the Kingdom of Denmark, along with Denmark proper and Greenland...
, Iceland
Iceland
Iceland , described as the Republic of Iceland, is a Nordic and European island country in the North Atlantic Ocean, on the Mid-Atlantic Ridge. Iceland also refers to the main island of the country, which contains almost all the population and almost all the land area. The country has a population...
and Greenland
Greenland
Greenland is an autonomous country within the Kingdom of Denmark, located between the Arctic and Atlantic Oceans, east of the Canadian Arctic Archipelago. Though physiographically a part of the continent of North America, Greenland has been politically and culturally associated with Europe for...
.

King Olaf Haraldsson created an episcopal see at Nidaros, installing the monk Grimkill as bishop. Many English and German bishops and priests laboured in Norway. The Norwegian bishops were at first dependent on the Archbishop of Hamburg-Bremen, and from 1103 on the Archbishop of Lund, then Primate of Scandinavia.

Archbishop Jon Birgerson was succeeded by Eystein
Eysteinn Erlendsson
Eysteinn Erlendsson was Archbishop of Nidaros from 1161 to his death in 1188.-Background:...
(Beatus Augustinus, 1158–88), previously royal secretary and treasurer, a man of brilliant intellect, strong will and deep piety. Such a man was then needed to defend the liberty of the Catholic Church against the encroachments of King Sverre, who wished to make the Church a mere tool of the temporal power. The archbishop was compelled to flee from Norway to England until he was able to return, and a sort of reconciliation took place later between him and the king. But on Eystein's death Sverre renewed his attacks, and Archbishop Eric had to leave the country and take refuge with Archbishop Absalon of Lund. At last, when Sverre attacked the papal legate, Pope Innocent III
Pope Innocent III
Pope Innocent III was Pope from 8 January 1198 until his death. His birth name was Lotario dei Conti di Segni, sometimes anglicised to Lothar of Segni....
laid the king and his partisans under interdict
Interdict (Roman Catholic Church)
In Roman Catholic canon law, an interdict is an ecclesiastical censure that excludes from certain rites of the Church individuals or groups, who nonetheless do not cease to be members of the Church.-Distinctions in canon law:...
.

King Håkon III Sverresson (1202), son and successor of Sverre, hastened to make peace with the Church, whose liberty had been preserved by the unflinching attitude of the pope and his archbishops. What would have happened, asks the Protestant ecclesiastical historian of Norway, Dr. Anton Christian Bang
Anton Christian Bang
Anton Christian Bang was a Norwegian theologian, historian and politician for the Conservative Party of Norway....
, if the Church, deprived of all liberty, had become the submissive slave of absolute royalty? What influence would it have exercised at a time when its chief mission was to act as the educator of the people and as the necessary counterpoise to defend the liberty of the people against the brutal whims of the secular lords? And what would have happened when a century later royalty left the country? After that time the Church was in reality the sole centre about which was grouped the whole national life of our country.

To regulate ecclesiastical affairs, which had suffered during the struggles with Sverre, Innocent IV in 1247 sent Cardinal William of Sabina as legate to Norway. He intervened against certain encroachments on the part of the bishops, reformed various abuses, and abolished the ordeal by hot iron. Owing in great measure to the papal legates, Norway became more closely linked with the supreme head of Christendom at Rome. Secular priests, as well as Benedictines, Cistercians, Augustinians
Augustinians
The term Augustinians, named after Saint Augustine of Hippo , applies to two separate and unrelated types of Catholic religious orders:...
, Dominicans
Dominican Order
The Order of Preachers , after the 15th century more commonly known as the Dominican Order or Dominicans, is a Catholic religious order founded by Saint Dominic and approved by Pope Honorius III on 22 December 1216 in France...
and Franciscans worked together for the prosperity of the Church. Archbishops Eilif Kortin (d. 1332), Paul Baardson (d. 1346) and Arne Vade (d. 1349) showed especially remarkable zeal. Provincial councils were held, at which serious efforts were made to eliminate abuses and to encourage Christian education and morality

There at Nidaros was situated the tomb of St. Olaf, and around the patron of Norway, Rex perpetuus Norvegiae
Rex Perpetuus Norvegiae
Rex Perpetuus Norvegiae , i.e. Norway's Eternal King) is an in the 12th century appearing term for Olaf the Holy.-Background:In written sources, the term Perpetuus rex Norvegiæ appears only in Historia Norvegiæ from the second part of the 12th century.The 1163 Succession Law stated that all kings...
(meaning: Perpetual king of Norway), the national and ecclesiastical life of the country was centred. Pilgrims flocked from all quarters to the tomb. The feast of St. Olaf on 29 July was a day or reunion for "all the nations of the Northern seas, Norwegians, Swedes, Goths, Cimbrians, Danes and Slavs", to quote an old chronicler, in the cathedral of Nidaros, where the reliquary of St. Olaf rested near the altar. Built in the Romanesque style by King Olaf Kyrre (d. 1093), the cathedral had been enlarged by Archbishop Eystein in Ogival style. It was finished only in 1248 by Archbishop Sigurd Sim. Although several times damaged by fire, the ancient cathedral was restored each time until the storms of the Reformation.

Archbishop Erik Valkendorf was exiled in 1521 and his successor, Olaf Engelbrektsson, who had been the instrument of the royal will in the introduction of Lutheranism
Lutheranism
Lutheranism is a major branch of Western Christianity that identifies with the theology of Martin Luther, a German reformer. Luther's efforts to reform the theology and practice of the church launched the Protestant Reformation...
, had also, as a partisan of king Christian II of Denmark and Norway
Christian II of Denmark
Christian II was King of Denmark, Norway and Sweden , during the Kalmar Union.-Background:...
, to fly from the threat of Christian III
Christian III of Denmark
Christian III reigned as king of Denmark and Norway. He was the eldest son of King Frederick I and Anna of Brandenburg.-Childhood:...
(1537). The valuable reliquaries of St. Olaf and St. Augustine (Eystein) were taken away to the Danish capital Copenhagen and melted down. The bones of St. Olaf were buried in the cathedral, and the place left unmarked. Tradition holds that this is so that no future despot can ever find them and steal them again.

In the early 19th century, when Norway regained self-rule as a separate Kingdom in a union with Sweden in 1814, a period of national romanticism was ushered in, in which much attention was paid to the remains of the independent medieval kingdom. It was resolved to restore the ancient cathedral of Nidaros. Now it stands once more completed as the largest cathedral in Northern Europe.

Recently the pilgrimage
Pilgrimage
A pilgrimage is a journey or search of great moral or spiritual significance. Typically, it is a journey to a shrine or other location of importance to a person's beliefs and faith...
route to Nidaros Cathedral, the site of Saint Olav's tomb, has been re-instated. Following the Norwegian spelling the route is known as Saint Olav's Way. The main route, which is approximately 640 km long, starts in Oslo
Oslo
Oslo is a municipality, as well as the capital and most populous city in Norway. As a municipality , it was established on 1 January 1838. Founded around 1048 by King Harald III of Norway, the city was largely destroyed by fire in 1624. The city was moved under the reign of Denmark–Norway's King...
in the ruins of the Old City (Gamlebyen) and heads North, along the lake Mjøsa
Mjøsa
Mjøsa is Norway's largest lake, as well as one of the deepest lakes in Norway and in Europe as a whole, after Hornindalsvatnet. It is located in the southern part of Norway, about 100 km north of Oslo...
, up the valley Gudbrandsdal
Gudbrandsdal
The Gudbrandsdalen is a valley and traditional district in the Norwegian county of Oppland. The valley is oriented in a north-westerly direction from Lillehammer at Mjøsa, extending 230 km toward Romsdal...
, over Dovrefjell
Dovrefjell
Dovrefjell is a mountain range in central Norway that forms a natural barrier between Eastern Norway and Trøndelag, the area around Trondheim. As a result, it has been heavily trafficked during and probably preceding historical times...
and down the valley Oppdal
Oppdal
is a village and municipality in Sør-Trøndelag county, Norway. It is part of the Dovre region. The administrative centre of the municipality is the village of Oppdal. Other villages in the municipality include Lønset, Vognillan, Fagerhaug, and Holan...
to end at Nidaros Cathedral in Trondheim
Trondheim
Trondheim , historically, Nidaros and Trondhjem, is a city and municipality in Sør-Trøndelag county, Norway. With a population of 173,486, it is the third most populous municipality and city in the country, although the fourth largest metropolitan area. It is the administrative centre of...
. There is a Pilgrim's Office in Oslo which gives advice to pilgrims, and a Pilgrim Centre in Trondheim, under the aegis of the Cathedral, which awards certificates to successful pilgrims upon the completion of their journey.