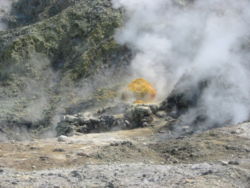 The Phlegraean Fields, also known as Campi Flegrei, (from Greek
Greek language
Greek is an independent branch of the Indo-European family of languages. Native to the southern Balkans, it has the longest documented history of any Indo-European language, spanning 34 centuries of written records. Its writing system has been the Greek alphabet for the majority of its history;...
φλέγος, burning), is a large 13 kilometres (8.1 mi) wide caldera
Caldera
A caldera is a cauldron-like volcanic feature usually formed by the collapse of land following a volcanic eruption, such as the one at Yellowstone National Park in the US. They are sometimes confused with volcanic craters...
situated to the west of Naples
Naples
Naples is a city in Southern Italy, situated on the country's west coast by the Gulf of Naples. Lying between two notable volcanic regions, Mount Vesuvius and the Phlegraean Fields, it is the capital of the region of Campania and of the province of Naples...
, Italy
Italy
Italy , officially the Italian Republic languages]] under the European Charter for Regional or Minority Languages. In each of these, Italy's official name is as follows:;;;;;;;;), is a unitary parliamentary republic in South-Central Europe. To the north it borders France, Switzerland, Austria and...
. It was declared a regional park in 2003. Lying mostly underwater, the area comprises 24 craters and volcanic edifices. Hydrothermal activity
Hydrothermal circulation
Hydrothermal circulation in its most general sense is the circulation of hot water; 'hydros' in the Greek meaning water and 'thermos' meaning heat. Hydrothermal circulation occurs most often in the vicinity of sources of heat within the Earth's crust...
can be observed at Lucrino
Lucrinus Lacus
Lucrinus Lacus, or Luctrin Lake is a lake of Campania, southern Italy, about three kilometres to the south of Lake Avernus....
, Agnano
Agnano
Agnano is a volcanic crater in Napoli, Italy, situated northwest of Naples in the Campi Flegrei region. It was popular among both Greeks and Romans, and was famed for its hot springs....
and the town of Pozzuoli
Pozzuoli
Pozzuoli is a city and comune of the province of Naples, in the Italian region of Campania. It is the main city of the Phlegrean peninsula.-History:Pozzuoli began as the Greek colony of Dicaearchia...
. There are also effusive gaseous manifestations in the Solfatara
Solfatara (volcano)
Solfatara is a shallow volcanic crater at Pozzuoli, near Naples, part of the Campi Flegrei volcanic area. It is a dormant volcano, which still emits jets of steam with sulphurous fumes. The name comes from the Latin, Sulpha terra, "land of sulphur", or "sulfur earth"...
crater, which is known as the mythological home of the Roman god of fire, Vulcan. The area also features bradyseism
Bradyseism
Bradyseism is the gradual uplift or descent of part of the Earth's surface caused by the filling or emptying of an underground magma chamber and/or hydrothermal activity, particularly in volcanic calderas...
ic phenomena, which are most evident at the Macellum of Pozzuoli
Macellum of Pozzuoli
The Macellum of Pozzuoli was the macellum or market building of the Roman colony of Puteoli, now known as Pozzuoli. When first excavated in the 18th century, the discovery of a statue of Serapis led to the building being mis-identified as the city's serapeum or Temple of Serapis.A band of borings...
which in the 18th century was mis-identified as a Temple of Serapis, as geologists puzzled over bands of boreholes (Gastrochaenolites
Gastrochaenolites
Gastrochaenolites is a trace fossil formed as a clavate boring in a hard substrate such as a shell, rock or carbonate hardground. The aperture of the boring is narrower than the main chamber and may be circular, oval, or dumb-bell shaped...
) left by marine Lithophaga
Lithophaga
Lithophaga, the date mussels, are a genus of medium-sized marine bivalve molluscs in the family Mytilidae.The shells of species in this genus are long and narrow with parallel sides. The animals bore into stone or coral rock with the help of pallial gland secretions, hence the systematic name...
molluscs on three standing marble columns, showing that the level of the site in relation to sea level had varied.

Three geological phases or periods are recognised and distinguished.

The caldera, which now is essentially at ground level, is accessible on foot. It contains a large number of fumarole
Fumarole
A fumarole is an opening in a planet's crust, often in the neighborhood of volcanoes, which emits steam and gases such as carbon dioxide, sulfur dioxide, hydrochloric acid, and hydrogen sulfide. The steam is created when superheated water turns to steam as its pressure drops when it emerges from...
s, from which steam can be seen issuing, and over 150 pools of boiling mud at last count. Several subsidiary cones and tuff craters lie within the caldera. One of these craters is filled by Lake Avernus. In 1538, an eight-day eruption in the area deposited enough material to create a new hill, Monte Nuovo. It has risen about 2 metres (7 ft) from ground level since 1970. It is a volcano capable of producing VEI
Volcanic Explosivity Index
The Volcanic Explosivity Index was devised by Chris Newhall of the U.S. Geological Survey and Stephen Self at the University of Hawaii in 1982 to provide a relative measure of the explosiveness of volcanic eruptions....
7 eruptions, as large as that of Tambora
Mount Tambora
Mount Tambora is an active stratovolcano, also known as a composite volcano, on the island of Sumbawa, Indonesia. Sumbawa is flanked both to the north and south by oceanic crust, and Tambora was formed by the active subduction zone beneath it. This raised Mount Tambora as high as , making it...
in 1815. At present, the Campi Flegrei area comprises the Naples districts of Agnano and Fuorigrotta
Fuorigrotta
Fuorigrotta is a western suburb of Naples, southern Italy.-Geography:It lies beyond the Posillipo hill and has been joined to the main body of Naples by two traffic tunnels through that hill since the early 20th century....
, the area of Pozzuoli, Bacoli
Bacoli
Bacoli is a comune in the Province of Naples in the Italian region Campania, located about 15 km west of Naples. As of 31 December 2004, it had a population of 27,402 and an area of 13.3 km².-History:...
, Mount Procida, Quarto, the Phlegrean Islands (Ischia
Ischia
Ischia is a volcanic island in the Tyrrhenian Sea. It lies at the northern end of the Gulf of Naples, about 30 km from the city of Naples. It is the largest of the Phlegrean Islands. Roughly trapezoidal in shape, it measures around 10 km east to west and 7 km north to south and has...
, Procida
Procida
Procida is one of the Flegrean Islands off the coast of Naples in southern Italy. The island is between Cape Miseno and the island of Ischia. With its tiny satellite island of Vivara, it is a comune of the province of Naples, in the region of Campania. The population is about ten...
and Vivara
Vivara
Vivara is a satellite islet of Procida, one of the three main islands in the Gulf of Naples. -Geography:...
).

Recent inflation of the caldera centre in the vicinity of Pozzuoli may presage an eruptive event within decades.

Italian wine
Italian wine
Italian wine is wine produced in Italy, a country which is home to some of the oldest wine-producing regions in the world. Italy is the world's largest wine producer, responsible for approximately one-fifth of world wine production in 2005. Italian wine is exported largely around the world and has...
, both red and white, under the Campi Flegrei DOC appellation comes from this area. Grapes destined for DOC production must be harvested up to a maximum yield
Yield (wine)
In viticulture, the yield is a measure of the amount of grapes or wine that is produced per unit surface of vineyard, and is therefore a type of crop yield...
of 12 tonnes/hectare
Hectare
The hectare is a metric unit of area defined as 10,000 square metres , and primarily used in the measurement of land. In 1795, when the metric system was introduced, the are was defined as being 100 square metres and the hectare was thus 100 ares or 1/100 km2...
for red grape varieties and 13 tonnes/ha for white grape varieties. The finished wines need to be fermented to a minimum alcohol level of 11.5% for reds and 10.5% for whites. While most Campi Flegrei wines are blends, varietal
Varietal
"Varietal" describes wines made primarily from a single named grape variety, and which typically displays the name of that variety on the wine label. Examples of grape varieties commonly used in varietal wines are Cabernet Sauvignon, Chardonnay and Merlot...
wines can be made from individual varieties provided the variety used comprises at least 90% of the blend and the wine is fermented to at least 12% alcohol for reds and 11% for whites.

Red Campi Flegrei is a blend of 50-70% Piedirosso
Piedirosso
Piedirosso is a red Italian wine grape variety that is planted primarily in the Campania region. The grape is considered a specialty of the region, being used to produce wines for local and tourist consumption. Its name "piedirosso" means "red feet" that reflects the bottom of the vine which used...
, 10-30% Aglianico
Aglianico
Aglianico is a black grape grown in the Basilicata and Campania regions of Italy. The vine originated in Greece and was brought to the south of Italy by Greek settlers. The name may be a corruption of Vitis hellenica, Latin for "Greek vine"...
and/or Sciascinoso and up to 10% of other local (both red and white) grape varieties. The whites are composed of 50-70% Falanghina
Falanghina
Falanghina, also called Falanghina Greco, is a variety of wine grape of Vitis vinifera, used for white wines. It is considered a characterful ancient grape variety which may have provided a basis for the classical Falernian wine...
, 10-30% Biancolella
Biancolella
Biancolella is a white Italian wine grape variety grown primarily in the Campania region of southern Italy. It is a permitted grape in a few Campanian Denominazione di origine controllatas but is used mostly as a blending variety.-Synonyms:...
and/or Coda di Volpe
Coda di Volpe
Coda di Volpe is a white Italian wine grape variety that has been historically grown in the Campania region around the town of Naples. It is often confused with another white Italian wine grape, Emilia, that share many of the same synonyms as Coda di Volpe....
with up to 30% of other local white grape varieties.

Campi Flegrei has had strategical and cultural importance.

This article has been completed with material from :it:Campi Flegrei, Wikipedia
Wikipedia
Wikipedia is a free, web-based, collaborative, multilingual encyclopedia project supported by the non-profit Wikimedia Foundation. Its 20 million articles have been written collaboratively by volunteers around the world. Almost all of its articles can be edited by anyone with access to the site,...
in Italian
Italian language
Italian is a Romance language spoken mainly in Europe: Italy, Switzerland, San Marino, Vatican City, by minorities in Malta, Monaco, Croatia, Slovenia, France, Libya, Eritrea, and Somalia, and by immigrant communities in the Americas and Australia...
and :es:Campos Flegreos, Wikipedia in Spanish
Spanish language
Spanish , also known as Castilian , is a Romance language in the Ibero-Romance group that evolved from several languages and dialects in central-northern Iberia around the 9th century and gradually spread with the expansion of the Kingdom of Castile into central and southern Iberia during the...
.