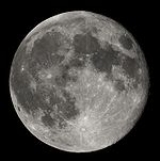 Overview
The Moon is Earth
Earth
Earth is the third planet from the Sun, and the densest and fifth-largest of the eight planets in the Solar System. It is also the largest of the Solar System's four terrestrial planets...
's only known natural satellite
Natural satellite
A natural satellite or moon is a celestial body that orbits a planet or smaller body, which is called its primary. The two terms are used synonymously for non-artificial satellites of planets, of dwarf planets, and of minor planets....
, and the fifth largest satellite in the Solar System
Solar System
The Solar System consists of the Sun and the astronomical objects gravitationally bound in orbit around it, all of which formed from the collapse of a giant molecular cloud approximately 4.6 billion years ago. The vast majority of the system's mass is in the Sun...
.

When were the first trips to the moon made

How is the moon a standard of measurement from ancient times?

Was the moon once a small earth with land ,sea, air and life?

What is theory that there were seas on the moon?

1178    Five Canterbury monks see what is possibly the Giordano Bruno crater being formed. It is believed that the current oscillations of the Moon's distance from the Earth (on the order of metres) are a result of this collision.

1959    Luna 1 becomes the first spacecraft to reach the vicinity of the Moon.

1964    Ranger program: Ranger 7 sends back the first close-up photographs of the moon, with images 1,000 times clearer than anything ever seen from earth-bound telescopes.