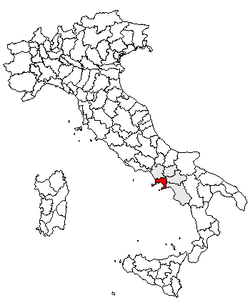 Baiae a frazione
Frazione
A frazione , in Italy, is the name given in administrative law to a type of territorial subdivision of a comune; for other administrative divisions, see municipio, circoscrizione, quartiere...
of the comune
Comune
In Italy, the comune is the basic administrative division, and may be properly approximated in casual speech by the English word township or municipality.-Importance and function:...
of Bacoli
Bacoli
Bacoli is a comune in the Province of Naples in the Italian region Campania, located about 15 km west of Naples. As of 31 December 2004, it had a population of 27,402 and an area of 13.3 km².-History:...
) in the Campania
Campania
Campania is a region in southern Italy. The region has a population of around 5.8 million people, making it the second-most-populous region of Italy; its total area of 13,590 km² makes it the most densely populated region in the country...
region of Italy
Italy
Italy , officially the Italian Republic languages]] under the European Charter for Regional or Minority Languages. In each of these, Italy's official name is as follows:;;;;;;;;), is a unitary parliamentary republic in South-Central Europe. To the north it borders France, Switzerland, Austria and...
was a Roman seaside resort
Resort
A resort is a place used for relaxation or recreation, attracting visitors for holidays or vacations. Resorts are places, towns or sometimes commercial establishment operated by a single company....
on the Bay of Naples. It was said to have been named after Baius
Baius
Baius may refer to*Michel Baius, Catholic theologian*Băiuş, a village in the Leova district, Moldova*Baios , Odysseus' helmsman, buried in a bay near Naples that was named after him Baiae....
, who was supposedly buried there. Baiae was for several hundred years a fashionable resort, especially towards the end of the Roman Republic
Roman Republic
The Roman Republic was the period of the ancient Roman civilization where the government operated as a republic. It began with the overthrow of the Roman monarchy, traditionally dated around 508 BC, and its replacement by a government headed by two consuls, elected annually by the citizens and...
. Baiae was even more popular than Pompeii
Pompeii
The city of Pompeii is a partially buried Roman town-city near modern Naples in the Italian region of Campania, in the territory of the comune of Pompei. Along with Herculaneum, Pompeii was destroyed and completely buried during a long catastrophic eruption of the volcano Mount Vesuvius spanning...
, Herculaneum
Herculaneum
Herculaneum was an ancient Roman town destroyed by volcanic pyroclastic flows in AD 79, located in the territory of the current commune of Ercolano, in the Italian region of Campania in the shadow of Mt...
, and Capri
Capri
Capri is an Italian island in the Tyrrhenian Sea off the Sorrentine Peninsula, on the south side of the Gulf of Naples, in the Campania region of Southern Italy...
with the super-rich, notorious for the hedonistic
Hedonism
Hedonism is a school of thought which argues that pleasure is the only intrinsic good. In very simple terms, a hedonist strives to maximize net pleasure .-Etymology:The name derives from the Greek word for "delight" ....
temptations on offer, and for rumours of scandal and corruption
Political corruption
Political corruption is the use of legislated powers by government officials for illegitimate private gain. Misuse of government power for other purposes, such as repression of political opponents and general police brutality, is not considered political corruption. Neither are illegal acts by...
. Baiae was an integral part of Portus Julius
Portus Julius
Portus Julius was the home port for the Roman western imperial fleet, the classis Misenensis, named for nearby Cape Miseno...
, home port of the western Imperial Fleet
Roman Navy
The Roman Navy comprised the naval forces of the Ancient Roman state. Although the navy was instrumental in the Roman conquest of the Mediterranean basin, it never enjoyed the prestige of the Roman legions...
of ancient Rome.

Baiae was sacked by Muslim raiders in the 8th century AD and was deserted because of malaria
Malaria
Malaria is a mosquito-borne infectious disease of humans and other animals caused by eukaryotic protists of the genus Plasmodium. The disease results from the multiplication of Plasmodium parasites within red blood cells, causing symptoms that typically include fever and headache, in severe cases...
by 1500. Because of coastal subsidence most of Baiae is now under water in the Bay of Naples, largely due to local volcanic activity.

Excavations at the ancient site of Baiae show that the city was host to an important region for thermo-mineral bathing in antiquity. Baiae had been built on the Cumae
Cumae
Cumae is an ancient Greek settlement lying to the northwest of Naples in the Italian region of Campania. Cumae was the first Greek colony on the mainland of Italy , and the seat of the Cumaean Sibyl...
an peninsula, which was an active volcanic area, known as the Phlegraean Fields, the "fields devoured by fire". Baiae consisted of numerous baths, filled with warm mineral water directed to pools from sulfur springs
Sulfur Springs
Sulfur Springs is a popular tourist attraction found in Soufrière, Saint Lucia. In fact, the town of Soufrière got its name from the sulfur mining in the 19th century....
underground. Roman engineers were even able to construct a complex system of chambers that channeled heat beneath the land’s surface into bathing facilities that acted as saunas. However, these baths were not only used for relaxation purposes—they were also often used as medicinal remedies for various illnesses. It is noted that Roman physicians would often attend to their patients at these hot springs as well.

One of the bathing complexes on the hillside included the Temple of Echo (erroneously, since the seventeenth century, also called the Temple of Mercury) housing a pool. The building was so named due to the way that sound echoed around the dome which, at about 21.5 m (71 ft) in diameter, was the largest dome in the world until the construction of the Pantheon
Pantheon, Rome
The Pantheon ,Rarely Pantheum. This appears in Pliny's Natural History in describing this edifice: Agrippae Pantheum decoravit Diogenes Atheniensis; in columnis templi eius Caryatides probantur inter pauca operum, sicut in fastigio posita signa, sed propter altitudinem loci minus celebrata.from ,...
in Rome in 128CE.


Baiae as a resort 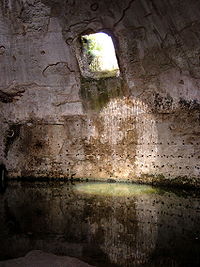 The topographical wonders of Baiae, along with the help of Roman engineers, made the city a perfect candidate for a resort for the ultra wealthy. Many elaborate villa
Villa
A villa was originally an ancient Roman upper-class country house. Since its origins in the Roman villa, the idea and function of a villa have evolved considerably. After the fall of the Roman Republic, villas became small farming compounds, which were increasingly fortified in Late Antiquity,...
s were built in Baiae, including those of Julius Caesar
Julius Caesar
Gaius Julius Caesar was a Roman general and statesman and a distinguished writer of Latin prose. He played a critical role in the gradual transformation of the Roman Republic into the Roman Empire....
and Nero
Nero
Nero , was Roman Emperor from 54 to 68, and the last in the Julio-Claudian dynasty. Nero was adopted by his great-uncle Claudius to become his heir and successor, and succeeded to the throne in 54 following Claudius' death....
. In fact, a large part of the town became imperial property under Augustus
Augustus
Augustus ;23 September 63 BC – 19 August AD 14) is considered the first emperor of the Roman Empire, which he ruled alone from 27 BC until his death in 14 AD.The dates of his rule are contemporary dates; Augustus lived under two calendars, the Roman Republican until 45 BC, and the Julian...
and later emperors—it was often a getaway for the elite with its large swimming pools and its domed casino. It was at his villa near Baiae that the Emperor Hadrian
Hadrian
Hadrian , was Roman Emperor from 117 to 138. He is best known for building Hadrian's Wall, which marked the northern limit of Roman Britain. In Rome, he re-built the Pantheon and constructed the Temple of Venus and Roma. In addition to being emperor, Hadrian was a humanist and was philhellene in...
died in AD 138.


Baiae as a sculpture workshop

The site of Baiae has occasionally revealed Roman sculptures: an Aphrodite of Baiae supposedly excavated in the site, was purchased before 1803 by the English antiquary and connoisseur Thomas Hope, who displayed it in his gallery in Duchess Street, London. It is a variant of the Venus de Medici.
A cache of plaster casts of Hellenistic sculpture has been found in a cellar room of the Baths of Sosandra at Baiae and is now on display in the Museo Archeologico dei Campi Flegrei at Baiae. It suggests a workshop mass-producing
Mass production
Mass production is the production of large amounts of standardized products, including and especially on assembly lines...
marble or bronze copies of Hellenistic and Greek sculptures for the Roman market from bronze original sculptures. These casts include parts of many famous sculptures such as the Harmodius and Aristogeiton
Harmodius and Aristogeiton (sculpture)
A sculptural pairing of the tyrannicides Harmodius and Aristogeiton was well known in the ancient world in two major versions but survives only in Roman marble copies...
. and the Athena of Velletri
Athena of Velletri
The Athena of Velletri or Velletri Pallas is a type of classical marble statue of Athena, wearing a helmet.-Original:All statues of this type are 1st century Roman copies of a lost Greek bronze, possibly a bronze of c. 430 BC by Kresilas. The oval face and the sharpness of the eyebrow ridge, nose...
.


Reference to Baiae in modern literature

One of the few references to Baiae in modern literature is the short story "The Procurator of Judea" (original French title "Le Procurateur de Judée") by Anatole France
Anatole France
Anatole France , born François-Anatole Thibault, , was a French poet, journalist, and novelist. He was born in Paris, and died in Saint-Cyr-sur-Loire. He was a successful novelist, with several best-sellers. Ironic and skeptical, he was considered in his day the ideal French man of letters...
(1902).

The Roman emperor Hadrian
Hadrian
Hadrian , was Roman Emperor from 117 to 138. He is best known for building Hadrian's Wall, which marked the northern limit of Roman Britain. In Rome, he re-built the Pantheon and constructed the Temple of Venus and Roma. In addition to being emperor, Hadrian was a humanist and was philhellene in...
makes several trips to the Baiae, including his last, in Marguerite Yourcenar
Marguerite Yourcenar
Marguerite Yourcenar was a Belgian-born French novelist and essayist. Winner of the Prix Femina and the Erasmus Prize, she was the first woman elected to the Académie française, in 1980, and the seventeenth person to occupy Seat 3.-Biography:Yourcenar was born Marguerite Antoinette Jeanne Marie...
's Memoirs of Hadrian.

Also in Caroline Lawrence's Roman Mysteries series, the eleventh book ; The Sirens of Surrentum, is set nearby Baiae. It is portrayed as a glirarium of licentiousness.

In the Latin textbooks Ecce Romani Baiae is the place where Gaius Cornelius Calvus and his family have their summer villa. It goes on to say that Baiae is a place where the wealthy would live and the Cornelius' go on to live in the city. Steven Saylor
Steven Saylor
Steven Saylor is an American author of historical novels. He is a graduate of the University of Texas at Austin, where he studied history and Classics....
's detective novel Arms of Nemesis (1992) featuring Gordianus the Finder
Gordianus the Finder
Gordianus the Finder is the fictional protagonist of Steven Saylor's Roma Sub Rosa series of mystery novels set in Republican Rome. He lives by his wits, investigating crimes and other cases for Roman advocates such as Marcus Tullius Cicero...
unfolds in Baiae, at the time of the Spartacus rebellion.