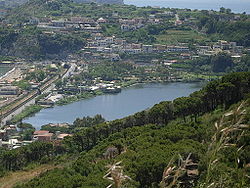 Lucrinus Lacus, or Luctrin Lake (Italian: Lago di Lucrino) is a lake of Campania
Campania
Campania is a region in southern Italy. The region has a population of around 5.8 million people, making it the second-most-populous region of Italy; its total area of 13,590 km² makes it the most densely populated region in the country...
, southern Italy, about three kilometres to the south of Lake Avernus
Lake Avernus
Lake Avernus is a volcanic crater lake located in the Avernus crater in the Campania region of southern Italy, around northwest of Pozzuoli. It is near the volcanic field known as the Campi Flegrei and comprises part of the wider Campanian volcanic arc...
.

The lake is separated from the sea (the Gulf of Pozzuoli
Gulf of Pozzuoli
In the geography of Italy, the Gulf of Pozzuoli west of Naples is a small indentation in the coastline in the northwestern end of the Gulf of Naples....
) by a narrow strip of land that is traversed by the coast road, the Via Herculanea, and by a modern railway. The road runs on an embankment, the construction of which was traditionally attributed to Heracles
Heracles
Heracles ,born Alcaeus or Alcides , was a divine hero in Greek mythology, the son of Zeus and Alcmene, foster son of Amphitryon and great-grandson of Perseus...
in Strabo
Strabo
Strabo, also written Strabon was a Greek historian, geographer and philosopher.-Life:Strabo was born to an affluent family from Amaseia in Pontus , a city which he said was situated the approximate equivalent of 75 km from the Black Sea...
's time. This strip was reinforced with a sea wall, "where the sea angrily dashes, but is thrust back with echoing roar" and severed by Marcus Vipsanius Agrippa
Marcus Vipsanius Agrippa
Marcus Vipsanius Agrippa was a Roman statesman and general. He was a close friend, son-in-law, lieutenant and defense minister to Octavian, the future Emperor Caesar Augustus...
, in order to make a harbour of Lake Lucrinus, which he joined to Avernus by a canal, as mentioned in Virgil
Virgil
Publius Vergilius Maro, usually called Virgil or Vergil in English , was an ancient Roman poet of the Augustan period. He is known for three major works of Latin literature, the Eclogues , the Georgics, and the epic Aeneid...
, Georgics
Georgics
The Georgics is a poem in four books, likely published in 29 BC. It is the second major work by the Latin poet Virgil, following his Eclogues and preceding the Aeneid. It is a poem that draws on many prior sources and influenced many later authors from antiquity to the present...

The size of present-day Lago Lucrino, also known as the maricello ("little sea"), was much reduced by the rise of the cratered volcanic cone
Volcanic cone
Volcanic cones are among the simplest volcanic formations. They are built by ejecta from a volcanic vent, piling up around the vent in the shape of a cone with a central crater. Volcanic cones are of different types, depending upon the nature and size of the fragments ejected during the eruption...
of the Monte Nuovo
Monte Nuovo
Monte Nuovo is a cinder cone volcano within the Campi Flegrei caldera, near Naples, southern Italy. A series of damaging earthquakes and changes in land elevation preceded its only eruption, which lasted from September 29 to October 6, 1538, when it was formed...
in 1538. The length of the former dyke that separated it from the sea, a length of about one-and-a-half kilometres, can be traced by skin divers. Its greatest depth is about 5 metres.

In Roman days its fisheries were important and its oyster
Oyster
The word oyster is used as a common name for a number of distinct groups of bivalve molluscs which live in marine or brackish habitats. The valves are highly calcified....
-beds, whose foundation is attributed to one Sergius Orata
Sergius Orata
Sergius Orata was a famed merchant and hydraulic engineer of the Roman Republic.Sergius was well-known by his contemporaries because of the breeding and commercialization of oysters, in which he can be considered a pioneer. Orata wanted to take advantage of Romans' taste for shellfish, so he...
in about 100 BC, were renowned - as they are today.

It was also in favour as a resort for pleasure excursions from Baiae (cf. Martial
Martial
Marcus Valerius Martialis , was a Latin poet from Hispania best known for his twelve books of Epigrams, published in Rome between AD 86 and 103, during the reigns of the emperors Domitian, Nerva and Trajan...
i. 62) and its banks were covered with villas, of which the best known was Cicero
Cicero
Marcus Tullius Cicero , was a Roman philosopher, statesman, lawyer, political theorist, and Roman constitutionalist. He came from a wealthy municipal family of the equestrian order, and is widely considered one of Rome's greatest orators and prose stylists.He introduced the Romans to the chief...
's villa Cumanum, the seat of his Academia, on the east bank. The remnants of this villa, with the village of Tripergola, disappeared beneath the sea in 1538. In 59, according to Tacitus, Agrippina the Younger
Agrippina the Younger
Julia Agrippina, most commonly referred to as Agrippina Minor or Agrippina the Younger, and after 50 known as Julia Augusta Agrippina was a Roman Empress and one of the more prominent women in the Julio-Claudian dynasty...
proceeded to her villa on this lake's shore after the shipwreck arranged by Nero was bungled and she had managed to swim to some boats and thence arrive ashore.

Today Lucrino is a frazione
Frazione
A frazione , in Italy, is the name given in administrative law to a type of territorial subdivision of a comune; for other administrative divisions, see municipio, circoscrizione, quartiere...
of the comune
Comune
In Italy, the comune is the basic administrative division, and may be properly approximated in casual speech by the English word township or municipality.-Importance and function:...
of Pozzuoli
Pozzuoli
Pozzuoli is a city and comune of the province of Naples, in the Italian region of Campania. It is the main city of the Phlegrean peninsula.-History:Pozzuoli began as the Greek colony of Dicaearchia...
.
The source of this article is wikipedia, the free encyclopedia.  The text of this article is licensed under the GFDL.