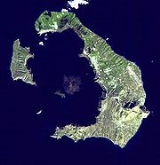 Overview
A caldera is a cauldron-like volcanic
Volcano
2. Bedrock3. Conduit 4. Base5. Sill6. Dike7. Layers of ash emitted by the volcano8. Flank| 9. Layers of lava emitted by the volcano10. Throat11. Parasitic cone12. Lava flow13. Vent14. Crater15...
feature usually formed by the collapse of land following a volcanic eruption, such as the one at Yellowstone National Park
Yellowstone National Park
Yellowstone National Park, established by the U.S. Congress and signed into law by President Ulysses S. Grant on March 1, 1872, is a national park located primarily in the U.S. state of Wyoming, although it also extends into Montana and Idaho...
in the US. They are sometimes confused with volcanic crater
Volcanic crater
A volcanic crater is a circular depression in the ground caused by volcanic activity. It is typically a basin, circular in form within which occurs a vent from which magma erupts as gases, lava, and ejecta. A crater can be of large dimensions, and sometimes of great depth...
s. The word comes from Spanish
Spanish language
Spanish , also known as Castilian , is a Romance language in the Ibero-Romance group that evolved from several languages and dialects in central-northern Iberia around the 9th century and gradually spread with the expansion of the Kingdom of Castile into central and southern Iberia during the...
caldera, and this from Latin
Latin
Latin is an Italic language originally spoken in Latium and Ancient Rome. It, along with most European languages, is a descendant of the ancient Proto-Indo-European language. Although it is considered a dead language, a number of scholars and members of the Christian clergy speak it fluently, and...
CALDARIA, meaning "cooking pot." In some texts the English term cauldron
Cauldron
A cauldron or caldron is a large metal pot for cooking and/or boiling over an open fire, with a large mouth and frequently with an arc-shaped hanger.- Etymology :...
is also used.

In 1815, the German geologist Leopold von Buch visited the Las Cañadas caldera of Teide
Teide
Mount Teide , is a volcano on Tenerife, Canary Islands. Its summit is the highest point in Spain, the highest point above sea level in the islands of the Atlantic, and it is the third highest volcano in the world measured from its base on the ocean floor, after Mauna Loa and Mauna Kea located in...
on Tenerife
Tenerife
Tenerife is the largest and most populous island of the seven Canary Islands, it is also the most populated island of Spain, with a land area of 2,034.38 km² and 906,854 inhabitants, 43% of the total population of the Canary Islands. About five million tourists visit Tenerife each year, the...
, and the Caldera de Taburiente on La Palma
La Palma
La Palma is the most north-westerly of the Canary Islands. La Palma has an area of 706 km2 making it the fifth largest of the seven main Canary Islands...
, both in the Canary Islands
Canary Islands
The Canary Islands , also known as the Canaries , is a Spanish archipelago located just off the northwest coast of mainland Africa, 100 km west of the border between Morocco and the Western Sahara. The Canaries are a Spanish autonomous community and an outermost region of the European Union...
.

What vocb words are there to learn about calderas

What is the hitory and the kinds of collderea mindanao?

What is collderea mindanao?
More
x