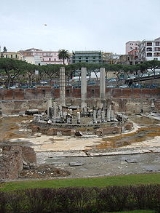 Encyclopedia
Bradyseism is the gradual uplift (positive bradyseism) or descent (negative bradyseism) of part of the Earth's surface caused by the filling or emptying of an underground magma chamber
Magma chamber
A magma chamber is a large underground pool of molten rock found beneath the surface of the Earth. The molten rock in such a chamber is under great pressure, and given enough time, that pressure can gradually fracture the rock around it creating outlets for the magma...
and/or hydrothermal activity, particularly in volcanic calderas. It can persist for millennia in between eruptions and each uplift event is normally accompanied by thousands of small to moderate earthquakes. The word derives from the ancient greek
Ancient Greek
Ancient Greek is the stage of the Greek language in the periods spanning the times c. 9th–6th centuries BC, , c. 5th–4th centuries BC , and the c. 3rd century BC – 6th century AD of ancient Greece and the ancient world; being predated in the 2nd millennium BC by Mycenaean Greek...
words "bradus", meaning slow, and "sism" meaning movement, and was coined by Arturo Issel
Arturo Issel
Arturo Issel was an Italian geologist, palaeontologist, malacologist and archaeologist. He is noted for first defining the Tyrrhenian Stage in 1914...
in 1883.

The area around the Phlegraean Fields (Campi Flegrei) caldera near Naples
Naples
Naples is a city in Southern Italy, situated on the country's west coast by the Gulf of Naples. Lying between two notable volcanic regions, Mount Vesuvius and the Phlegraean Fields, it is the capital of the region of Campania and of the province of Naples...
, which includes the dormant Solfatara volcano
Solfatara (volcano)
Solfatara is a shallow volcanic crater at Pozzuoli, near Naples, part of the Campi Flegrei volcanic area. It is a dormant volcano, which still emits jets of steam with sulphurous fumes. The name comes from the Latin, Sulpha terra, "land of sulphur", or "sulfur earth"...
, is especially noted for bradyseismic uplift and subsidence. The inflation and deflation of this caldera is especially well documented due to its seaside location and a long history of habitation and construction in the area.

In particular, the town of Pozzuoli
Pozzuoli
Pozzuoli is a city and comune of the province of Naples, in the Italian region of Campania. It is the main city of the Phlegrean peninsula.-History:Pozzuoli began as the Greek colony of Dicaearchia...
features the Roman Macellum of Pozzuoli
Macellum of Pozzuoli
The Macellum of Pozzuoli was the macellum or market building of the Roman colony of Puteoli, now known as Pozzuoli. When first excavated in the 18th century, the discovery of a statue of Serapis led to the building being mis-identified as the city's serapeum or Temple of Serapis.A band of borings...
in which three marble columns show bands of boreholes or Gastrochaenolites
Gastrochaenolites
Gastrochaenolites is a trace fossil formed as a clavate boring in a hard substrate such as a shell, rock or carbonate hardground. The aperture of the boring is narrower than the main chamber and may be circular, oval, or dumb-bell shaped...
left by marine Lithophaga
Lithophaga
Lithophaga, the date mussels, are a genus of medium-sized marine bivalve molluscs in the family Mytilidae.The shells of species in this genus are long and narrow with parallel sides. The animals bore into stone or coral rock with the help of pallial gland secretions, hence the systematic name...
molluscs. These occur up to 7 metres up the columns, showing how bradyseism in the area lowered the land to at least this depth under the sea and subsequently raised it again.

More recently, between 1968 and 1972, the town suffered an episode of positive bradyseism and rose by 1.7 metres. Another rise of 1.8 metres occurred between 1982 and 1984. This correlated with a shallow (4 km deep) earthquake swarm
Earthquake swarm
Earthquake swarms are events where a local area experiences sequences of many earthquakes striking in a relatively short period of time. The length of time used to define the swarm itself varies, but the United States Geological Survey points out that an event may be on the order of days, weeks, or...
during the same period, which led to the evacuation of 30,000 people due to the perceived risk of imminent eruption.
The source of this article is wikipedia, the free encyclopedia.  The text of this article is licensed under the GFDL.