Overview
An amphitheatre is an open-air venue used for entertainment and performances.

There are two similar, but distinct, types of structure for which the word "amphitheatre" is used: Ancient Roman amphitheatres were large central performance spaces surrounded by ascending seating, and were commonly used for spectator sports; these compare more closely to modern open-air stadiums
Stadium
A modern stadium is a place or venue for outdoor sports, concerts, or other events and consists of a field or stage either partly or completely surrounded by a structure designed to allow spectators to stand or sit and view the event.)Pausanias noted that for about half a century the only event...
. They were given this name because their shape resembled that of two theatres joined together.

What was the special property an amphitheatre had?
More 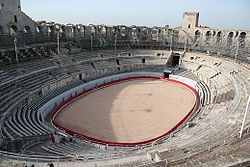 An amphitheatre is an open-air venue used for entertainment and performances.

There are two similar, but distinct, types of structure for which the word "amphitheatre" is used: Ancient Roman amphitheatres were large central performance spaces surrounded by ascending seating, and were commonly used for spectator sports; these compare more closely to modern open-air stadiums
Stadium
A modern stadium is a place or venue for outdoor sports, concerts, or other events and consists of a field or stage either partly or completely surrounded by a structure designed to allow spectators to stand or sit and view the event.)Pausanias noted that for about half a century the only event...
. They were given this name because their shape resembled that of two theatres joined together. Modern amphitheatres (incorrectly so named, but the word has come to be used in this sense) are more typically used for theatrical or concert performances and typically feature a more traditionally theatrical-style
Theater (structure)
A theater or theatre is a structure where theatrical works or plays are performed or other performances such as musical concerts may be produced. While a theater is not required for performance , a theater serves to define the performance and audience spaces...
stage with the audience only on one side, usually at an arc of less than a semicircle; these compare more closely to the theatres of ancient Greece
Theatre of Ancient Greece
The theatre of Ancient Greece, or ancient Greek drama, is a theatrical culture that flourished in ancient Greece between c. 550 and c. 220 BC. The city-state of Athens, which became a significant cultural, political and military power during this period, was its centre, where it was...
, and have been more commonly built throughout history as performance spaces.

Amphitheatres are typically man-made, though there are also geological formations used in the same manner which are known as natural amphitheatres. The term derives from the ancient Greek
Ancient Greek
Ancient Greek is the stage of the Greek language in the periods spanning the times c. 9th–6th centuries BC, , c. 5th–4th centuries BC , and the c. 3rd century BC – 6th century AD of ancient Greece and the ancient world; being predated in the 2nd millennium BC by Mycenaean Greek...
amphi-, meaning "around", or "on both sides" and théātron, meaning "place for viewing".

Ancient Roman amphitheaters were major public venues, circular or oval in shape, and used for events such as gladiator
Gladiator
A gladiator was an armed combatant who entertained audiences in the Roman Republic and Roman Empire in violent confrontations with other gladiators, wild animals, and condemned criminals. Some gladiators were volunteers who risked their legal and social standing and their lives by appearing in the...
combats, chariot races, venatio
Venatio
Venatio was a form of entertainment in Roman amphitheaters involving the hunting and slaying of wild animals. Exotic wild beasts from the far reaches of the Roman Empire were brought to Rome and hunts were held in the morning prior to the afternoon main event of gladiatorial duels...
nes (animal slayings) and executions. About 230 Roman amphitheatres have been found across the area of the Roman Empire
Roman Empire
The Roman Empire was the post-Republican period of the ancient Roman civilization, characterised by an autocratic form of government and large territorial holdings in Europe and around the Mediterranean....
. They are distinguished from circuses
Circus (building)
The Roman circus was a large open-air venue used for public events in the ancient Roman Empire. The circuses were similar to the ancient Greek hippodromes, although serving varying purposes. Along with theatres and amphitheatres, Circuses were one of the main entertainment sites of the time...
, from hippodrome
Hippodrome
A hippodrome was a Greek stadium for horse racing and chariot racing. The name is derived from the Greek words "hippos and "dromos"...
s (which were usually rectangular and built mainly for racing events) and from stadia
Stadium
A modern stadium is a place or venue for outdoor sports, concerts, or other events and consists of a field or stage either partly or completely surrounded by a structure designed to allow spectators to stand or sit and view the event.)Pausanias noted that for about half a century the only event...
, built for athletics
Sport
A Sport is all forms of physical activity which, through casual or organised participation, aim to use, maintain or improve physical fitness and provide entertainment to participants. Sport may be competitive, where a winner or winners can be identified by objective means, and may require a degree...
.

The earliest Roman amphitheatres date from the middle of the first century BC, but most were built under Imperial rule, from the Augustan
Augustus
Augustus ;23 September 63 BC – 19 August AD 14) is considered the first emperor of the Roman Empire, which he ruled alone from 27 BC until his death in 14 AD.The dates of his rule are contemporary dates; Augustus lived under two calendars, the Roman Republican until 45 BC, and the Julian...
period (27 BC–14 AD) onwards. Imperial amphitheatres comfortably accommodated 40,000–60,000 spectators, or up to 100,000 in the largest venues. They featured multi-storeyed, arcaded façades and were elaborately decorated with marble
Marble
Marble is a metamorphic rock composed of recrystallized carbonate minerals, most commonly calcite or dolomite.Geologists use the term "marble" to refer to metamorphosed limestone; however stonemasons use the term more broadly to encompass unmetamorphosed limestone.Marble is commonly used for...
and stucco
Stucco
Stucco or render is a material made of an aggregate, a binder, and water. Stucco is applied wet and hardens to a very dense solid. It is used as decorative coating for walls and ceilings and as a sculptural and artistic material in architecture...
. After the end of gladiatorial games in the 3rd century and of animal killings in the sixth, most amphitheatres fell into disrepair or were razed, or they were converted into fortifications or churches.

A contemporary amphitheatre, the sense in which the word has come to be used now, is a curved, acoustically vibrant performance space, particularly one located outdoors. Contemporary amphitheatres often include standing structures, called bandshells, sometimes curved or bowl-shaped, both behind the stage and behind the audience, creating an area which echoes or amplifies sound, making the amphitheatre ideal for musical or theatrical performances. Most are semicircular in shape, so they should not properly be called amphitheatres. Notable modern amphitheatres include Shoreline Amphitheatre
Shoreline Amphitheatre
Shoreline Amphitheatre is an outdoor amphitheater, in Mountain View, California, USA, in the San Francisco Bay Area. Inside the venue it has a capacity of 22,500, with 6,500 reserved seats and 16,000 general admission on the lawn...
, the Gibson Amphitheatre
Gibson Amphitheatre
The Gibson Amphitheatre is a theatre located in Universal City, California, USA. It seats up to 6,189 for concerts, including 6,089 chairback seats...
, and the Hollywood Bowl
Hollywood Bowl
The Hollywood Bowl is a modern amphitheater in the Hollywood area of Los Angeles, California, United States that is used primarily for music performances...
; the largest amphitheatre in the world is Bristol Motor Speedway
Bristol Motor Speedway
Bristol Motor Speedway, formerly known as Bristol International Raceway and Bristol Raceway is a NASCAR short track venue located in Bristol, Tennessee. Constructed in 1960, it held its first NASCAR race on July 30, 1961...
in Bristol, Tennessee
Bristol, Tennessee
Bristol is a city in Sullivan County, Tennessee, United States. The population was 26,702 at the 2010 census. It is the twin city of Bristol, Virginia, which lies directly across the state line between Tennessee and Virginia. The boundaries of both cities run parallel to each other along State...
, with a seating capacity
Seating capacity
Seating capacity refers to the number of people who can be seated in a specific space, both in terms of the physical space available, and in terms of limitations set by law. Seating capacity can be used in the description of anything ranging from an automobile that seats two to a stadium that seats...
of 160,000.

A natural amphitheatre is a performance space located in a spot where a steep mountain or a particular rock formation naturally amplifies or echoes sound, making it ideal for musical and theatrical performances. The term amphitheatre can also be used to describe naturally occurring formations which would be ideal for this purpose, even if no theatre has been constructed there. Notable natural amphitheatres include the Drakensberg amphitheatre
Amphitheatre (Drakensberg)
The Amphitheatre is one of the geographical features of the Northern Drakensberg, South Africa, and is widely regarded as one of the most impressive cliff faces on earth...
in Drakensberg
Drakensberg
The Drakensberg is the highest mountain range in Southern Africa, rising to in height. In Zulu, it is referred to as uKhahlamba , and in Sesotho as Maluti...
, South Africa
South Africa
The Republic of South Africa is a country in southern Africa. Located at the southern tip of Africa, it is divided into nine provinces, with of coastline on the Atlantic and Indian oceans...
, Slane Castle
Slane Castle
Slane Castle is located in the town of Slane, within the Boyne Valley of County Meath, Ireland. The castle has been the family home of the Conyngham Marquessate since the 18th century....
in Ireland
Ireland
Ireland is an island to the northwest of continental Europe. It is the third-largest island in Europe and the twentieth-largest island on Earth...
, the Supernatural Amphitheatre
Meredith Music Festival
The Meredith Music Festival is a three-day outdoor music festival held every December at the Supernatural Amphitheatre, a natural amphitheatre located on private farmland near the town of Meredith in Victoria, Australia...
in Victoria, Australia
Victoria (Australia)
Victoria is the second most populous state in Australia. Geographically the smallest mainland state, Victoria is bordered by New South Wales, South Australia, and Tasmania on Boundary Islet to the north, west and south respectively....
, and Echo amphitheatre
Echo amphitheatre
Echo amphitheater is a natural amphitheatre located in Rio Arriba County, in northern New Mexico in the southwestern United States, about 17 miles west of Abiquiú and about 4 miles up the road from Ghost Ranch....
, Red Rocks Amphitheatre
Red Rocks Amphitheatre
Red Rocks Amphitheatre is a rock structure near Morrison, Colorado, where concerts are given in the open-air amphitheatre. There is a large, tilted, disc-shaped rock behind the stage, a huge vertical rock angled outwards from stage right, several large outcrops angled outwards from stage left and a...
and The Gorge Amphitheatre
The Gorge Amphitheatre
The Gorge Amphitheatre is a 20,000+ seat concert venue, located above the Columbia River in George, Washington. It offers lawn-terrace seating and concert-friendly weather....
in the United States
United States
The United States of America is a federal constitutional republic comprising fifty states and a federal district...
.