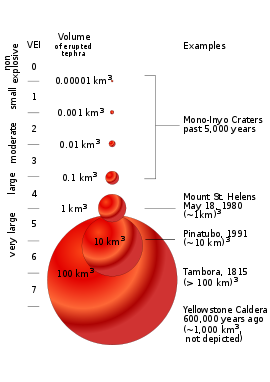 The Volcanic Explosivity Index (VEI) was devised by Chris Newhall
Christopher G. Newhall
Christopher G. Newhall is a world renowned volcanologist, formerly with the U.S. Geological Survey and since 2008 at the . He is the co-creator of the Volcanic explosivity index and is considered among the worlds leading experts in volcanic prediction.-Life:...
of the U.S. Geological Survey and Stephen Self at the University of Hawaii
University of Hawaii at Manoa
The University of Hawaii at Mānoa is a public, co-educational university and is the flagship campus of the greater University of Hawaii system...
in 1982 to provide a relative measure of the explosiveness of volcanic
Volcano
2. Bedrock3. Conduit 4. Base5. Sill6. Dike7. Layers of ash emitted by the volcano8. Flank| 9. Layers of lava emitted by the volcano10. Throat11. Parasitic cone12. Lava flow13. Vent14. Crater15...
eruptions.

Note that ash
Volcanic ash
Volcanic ash consists of small tephra, which are bits of pulverized rock and glass created by volcanic eruptions, less than in diameter. There are three mechanisms of volcanic ash formation: gas release under decompression causing magmatic eruptions; thermal contraction from chilling on contact...
, volcanic bomb
Volcanic bomb
A volcanic bomb is a mass of molten rock larger than 65 mm in diameter, formed when a volcano ejects viscous fragments of lava during an eruption. They cool into solid fragments before they reach the ground. Because volcanic bombs cool after they leave the volcano, they do not have grains...
s, and ignimbrite
Ignimbrite
An ignimbrite is the deposit of a pyroclastic density current, or pyroclastic flow, a hot suspension of particles and gases that flows rapidly from a volcano, driven by a greater density than the surrounding atmosphere....
are all treated alike. Density and vesicularity (gas bubbling) of the volcanic products in question is not taken into account. In contrast, the DRE (Dense-Rock Equivalent
Dense-rock equivalent
Dense-rock equivalent is a volcanologic calculation used to estimate volcanic eruption volume. One of the widely accepted measures of the size of a historic or prehistoric eruption is the volume of magma ejected as pumice and volcanic ash, known as tephra during an explosive phase of the eruption,...
) is sometimes calculated to give the actual amount of magma
Magma
Magma is a mixture of molten rock, volatiles and solids that is found beneath the surface of the Earth, and is expected to exist on other terrestrial planets. Besides molten rock, magma may also contain suspended crystals and dissolved gas and sometimes also gas bubbles. Magma often collects in...
erupted. Another weakness of the VEI is that it does not take into account the power output of an eruption, which makes it extremely difficult to determine with prehistoric or unobserved eruptions.

Scientists indicate how powerful volcanic eruptions are using the VEI. It records how much volcanic material is thrown out, to what height, and how long the eruption lasts; the scale goes from 0 to 8. The scale is logarithmic; an increase of 1 indicates an eruption that is 10 times more powerful.

A total of 47 eruptions of VEI 8 magnitude or above, ranging in age from Ordovician
Ordovician
The Ordovician is a geologic period and system, the second of six of the Paleozoic Era, and covers the time between 488.3±1.7 to 443.7±1.5 million years ago . It follows the Cambrian Period and is followed by the Silurian Period...
to Pleistocene
Pleistocene
The Pleistocene is the epoch from 2,588,000 to 11,700 years BP that spans the world's recent period of repeated glaciations. The name pleistocene is derived from the Greek and ....
, have been identified, of which 42 occurred in the past 36 million years. The most recent is Lake Taupo's Oruanui eruption
Oruanui eruption
The Oruanui eruption of New Zealand's Taupo Volcano was the world's largest known eruption in the past 70,000 years, with a Volcanic Explosivity Index of 8...
, 26,500 years ago, which means that there have not been any Holocene
Holocene
The Holocene is a geological epoch which began at the end of the Pleistocene and continues to the present. The Holocene is part of the Quaternary period. Its name comes from the Greek words and , meaning "entirely recent"...
(within the last 10,000 years) eruptions with a VEI of 8.