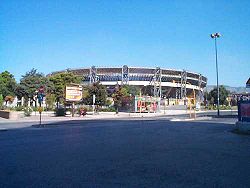 Fuorigrotta is a western suburb of Naples, southern Italy
Italy
Italy , officially the Italian Republic languages]] under the European Charter for Regional or Minority Languages. In each of these, Italy's official name is as follows:;;;;;;;;), is a unitary parliamentary republic in South-Central Europe. To the north it borders France, Switzerland, Austria and...
.

It lies beyond the Posillipo hill and has been joined to the main body of Naples by two traffic tunnels through that hill since the early 20th century.

It is the site of the Stadio San Paolo
Stadio San Paolo
Stadio San Paolo is a multi-purpose stadium in the western suburb of Fuorigrotta in Naples, Italy, and is the third largest football stadium in Italy after the San Siro and Stadio Olimpico. For the 1960 Summer Olympics in Rome, it hosted the football preliminaries. It is currently used mostly for...
, home to the Serie A
Serie A
Serie A , now called Serie A TIM due to sponsorship by Telecom Italia, is a professional league competition for football clubs located at the top of the Italian football league system and has been operating for over eighty years since 1929. It had been organized by Lega Calcio until 2010, but a new...
team S.S.C. Napoli
S.S.C. Napoli
Società Sportiva Calcio Napoli, commonly referred to as Napoli, is a professional Italian football club based in Naples and founded in 1926. The club has spent most of its history in Serie A, where it currently plays its 2011–12 season....
. It is also the site of the new Monte Sant'Angelo campus of the University of Naples.

An ancient Roman tunnel, the Crypta napoletana
Crypta napoletana
The Crypta Neapolitana is an ancient Roman tunnel in Naples, Italy.-Geography:The tunnel passes beneath the Posillipo hill and connects Naples with the so-called Phlegrean Fields and, then, the town of Pozzuoli along the road known as the via Domiziana. The tunnel is over 700 meters long...
, has been reopened for visitors. It connected Naples to the road "beyond the grotto" that led north to Rome.

Modern Fuorigrotta underwent intense expansion in the 20th century, first by the location in the area of the massive Overseas Fairgrounds by the Fascist government in 1936, and then during a period of urban expansion after WWII.
The source of this article is wikipedia, the free encyclopedia.  The text of this article is licensed under the GFDL.